Police forces in the Caribbean may be divided by water, but they should all unite in fighting crime, five female officers agreed on Saturday at the Miss Regional Police Pageant. …

END_OF_DOCUMENT_TOKEN_TO_BE_REPLACED 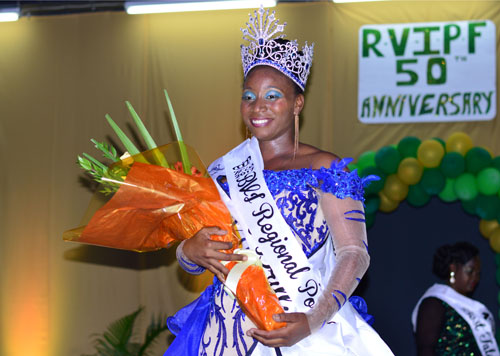 Police forces in the Caribbean may be divided by water, but they should all unite in fighting crime, five female officers agreed on Saturday at the Miss Regional Police Pageant.

During the competition, which was held at the Sir Rupert Briercliffe Hall, the women delivered spirited performances from start to finish.

At the beginning of the show, they marched on stage dressed in camouflage before dancing to soca music while waving flags of their countries. They then exited and returned individually to introduce themselves.

“I intend to wow you all with a marvelous show and show you all what Trinis are made of,” said Sascha Goodard of the Trinidad and Tobago Police Service.

The Criminal Investigation Department officer told the audience that she plans to become her country’s first female police commissioner and obtain a doctorate in social work.

But the Royal Virgin Islands Police Force’s Joevern Webb was not to be outdone.

“I am strapped, packed, locked and loaded,” said Ms. Webb, who would go on to win the pageant. “Talent: check. Creativity: check. Poise: check. The timer has been set; the countdown has begun.”

A soft-spoken Renika Isaac from the Royal Antiguan Police Force described herself as a well-rounded mother.

“Ladies and gentlemen, you have the right to remain silent. Everything I say and do will definitely impress you,” Ms. Isaac told attendees. “This sweet little island girl will wet your appetite and imagination.”

St. Lucian officer Zamera Frederick promised to capture the title with her poise, talent and beauty, but Kemelia Boyd from the Royal St. Vincent and the Grenadines Police Forces drew some of the loudest cheers of the night.

“This Caribbean gem intends to show you grace, mesmerise you with talent, and amaze you with intelligence,” Ms. Boyd said, adding that outside her duties as a police officer, she enjoys enhancing her culinary and cosmetology skills.

The Police Creative Wear segment followed the introduction. For about 15 minutes, the women individually modeled variations of their uniforms, except Ms. Frederick, who wore a skirt and blouse made from latex gloves.

During the talent segment, the women acted out skits and sang. Trinidad’s Ms. Goodard performed a monologue in memory of her colleague Nyasha Joseph, who was killed this year.

“I am a peacemaker, but now where is my peace? Someone decided a few days ago to put my soul to sleep,” Ms. Goodard said, acting the part of Ms. Joseph. “This was not the way I wanted to die. And while you have your opinions, it could really happen to anyone.”
Ms. Isaac from Antigua and Barbuda followed, with a solemn dramatisation from the perspective of a woman who died from HIV.

“I went to primary school not having to disclose my status, but secondary school created nightmares,” she said crying in front of a coffin brought on stage. “They called me names. They sent me death threats. They spat in my food.”

Comedy
Ms. Frederick of St. Lucia lightened the mood with a comical skit about the harsh criticisms she said law enforcers face no matter where they live.
“I am a British, Vincy, Antig-Lucian officer,” she said, wearing a shirt printed with the names of all participating countries. “We work day and night, hot sun and rain, away from our families. When you call, we come ASAP.”

SVG’s Ms. Boyd, who would later win the award for best talent, also made the audience laugh when she acted the role of a criminal arrested and taken to a police station.

“Officer, me no thief, me no lie, and you take me, bring me here,” the officer said. “Officer, me no give no statement, me no answer no question, me no informer.”

After a lengthy intermission, the women returned to show off evening dresses before answering questions on crime prevention in the region.

Shortly before 1:30 a.m., Ms. Webb was announced as winner, Ms. Boyd as first runner-up and Ms. Frederick as second runner-up.