Youths from across the United Kingdom overseas territories were invited to appear before a special sitting of the UK Youth Parliament in the House of Commons on Nov. 4 to …

END_OF_DOCUMENT_TOKEN_TO_BE_REPLACED 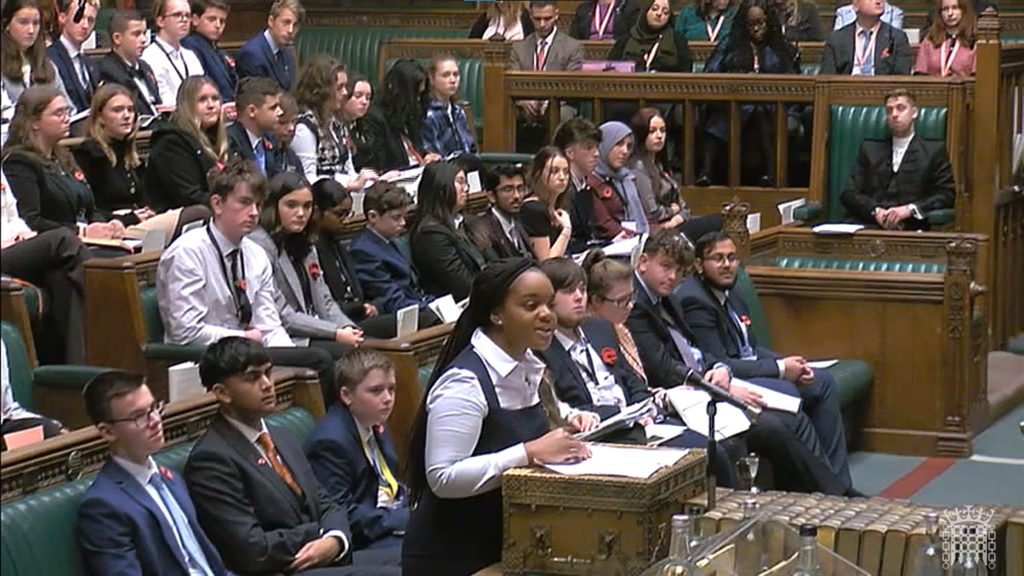 Charity Rymer made history last week as she became the first Virgin Islander to speak before the United Kingdom House of Commons, according to government. As one of several youths invited to speak before the body, she raised concerns about how climate change is affecting the Caribbean. (Screenshot: PARLIAMENT LIVE)

Youths from across the United Kingdom overseas territories were invited to appear before a special sitting of the UK Youth Parliament in the House of Commons on Nov. 4 to voice their thoughts on topics including mental health, climate change and the environment.

Among them was Charity Rymer, who the VI government described as the first Virgin Islander to ever speak in the House of Commons.

Young Virgin Islanders living in the UK were invited to apply with the BVI London Office for the opportunity. In keeping with a directive from Education, Youth Affairs and Sports Minister Sharie de Castro, the applicants were interviewed by a panel of VI Youth Parliament members and its secretariat, and Ms. Rymer was selected, according to government.

Speaker of the House of Commons Sir Lindsay Hoyle said when introducing the young representatives that the five main topics to be discussed were selected by voters in the UK Youth Parliament’s “Make Your Mark” ballot. He offered a special welcome to the representatives from the overseas territories.

Ms. Rymer focused her remarks on climate change, calling upon world leaders to recognise how catastrophic natural disasters are affecting island nations. She also explained how life changed in the VI following the 2017 hurricanes and how such extreme weather conditions are affecting the Caribbean.

“It is territories like the British Virgin Islands — whose carbon footprint is almost non-existent — who are the ones that will now suffer the most from the environmental challenges the world now faces,” she said. “In fact, for six months of the year, the threat of an active hurricane season is always looming over our shores.”

She also noted the ongoing social effects of catastrophic hurricanes, including the mental health challenges some residents continue to experience.

“For many months after I was evacuated, I couldn’t have helped but imagine the people that I’d left behind — those with no school, no roofs over their heads, and those, quite frankly, with no hope,” she said. “Life as they knew it had changed forever.”

She added that the future of the islands rests upon the shoulders of the youth, and that mitigating the effects of climate change is imperative. She also spoke of the cost of such a burden.

“Our inheritance is an ever-increasing bill to rebuild our territory with every natural disaster that pays an unwelcome visit,” she said.

However, Ms. Rymer said she remains hopeful for a better future.

Cayman Islands representative Chad Anthony Powell Jr. said he was glad for an opportunity to come together to work on issues facing all the OTs.

“With all that we have in common, perhaps we can form something new, and we can work together to solve our issues,” he said, giving Ms. Rymer’s attention to climate change as an example. “We are more than just the sum of our parts.”

After speaking in the House, Ms. Rymer joined delegates from fellow OTs in meeting with representatives of the UK Foreign, Commonwealth and Development Office.