As officials walked through the doors of the Governor’s Office on Friday morning, some of them joked around with Transportation, Works and Utilities Minister Kye Rymer, saying he wasn’t ready …

END_OF_DOCUMENT_TOKEN_TO_BE_REPLACED 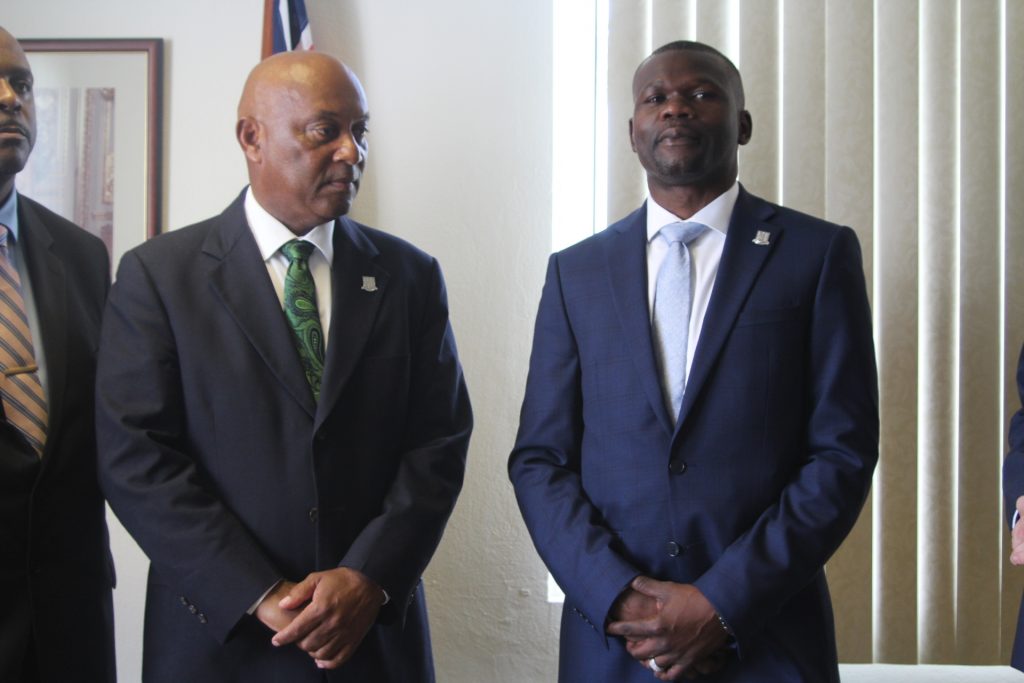 As officials walked through the doors of the Governor’s Office on Friday morning, some of them joked around with Transportation, Works and Utilities Minister Kye Rymer, saying he wasn’t ready to give up the title of deputy premier.

But now, the title temporarily belongs to Natural Resources, Labour and Immigration Minister Vincent Wheatley, who was sworn in for a three-month term.

“Premier, you can rest as- sured that over the next three months I’ll be making the most of this learning opportunity,” Mr. Wheatley reassured Premier Andrew Fahie. “Great leaders facilitate the development of leadership in others. They build a winning team. They do not prevent subordinates and team members from growing.”

Mr. Fahie explained that the purpose of rotating deputy premiers — a practice the new government announced shortly after taking office in February — is to ensure that every “link in the chain” is strong.

Mr. Wheatley is the third minister to take up the position since the February election: Before Mr. Rymer, the title was held by Education, Culture, Youth Affairs, Agriculture and Fisheries Minister Dr. Natalio “Sowande” Wheatley.

On Friday, Mr. Fahie acknowledged that he has handed over the reins to his deputy premiers at times, entrusting them to make important decisions about documents and legislation. He referred to the position of deputy premier as being a “hot seat” but explained that his own seat is “a little hotter.”

Mr. Rymer said, “The experience that I gained during this time, I will always remember. I was responsible for some important documents and I made those decisions in the best interest in the people of this territory. I understood the responsibilities and I used it, putting the people first.”

When Mr. Wheatley accepted the position and a signed document along with it, he took the opportunity to voice the concerns of sister island residents.

“It is not often we get a platform like this one,” he said.

These islands’ priorities, he said, include helping citizens and first-time homeowners to have suitable housing; reducing waste; increasing the use of alternative energy; fostering entrepreneurial spirit to maintain small businesses; ensuring access to health care; and improving infrastructure and transportation.

Jokingly calling his deputy an “Energizer bunny” for his list of priorities, Mr. Fahie acknowledged Mr. Wheatley’s “passion for the sister islands” and expressed his appreciation toward him for keeping “us pure in reminding us not to forget.”

When the floor opened up for members of the media to ask questions of attending officials — who included Governor Gus Jaspert — it was announced that at the end of the revolving terms, a permanent deputy premier will be chosen.

“When that time comes, we’re going to sit and choose a deputy premier,” Mr. Fahie said. “Like we’ve done everything, we’ll do it together. We’ll just sit down and see what’s best for the group. We’ll cross that bridge when it comes.”

Health and Social Development Minister Carvin Malone is the remaining minister who has not yet served in the position.