Is it time for a change in the Virgin Islands?   This was the question of the night on Saturday, when the territory’s two largest political parties each launched four …

END_OF_DOCUMENT_TOKEN_TO_BE_REPLACED 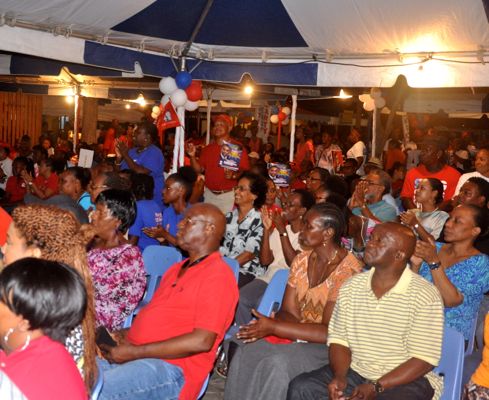 Is it time for a change in the Virgin Islands?

This was the question of the night on Saturday, when the territory’s two largest political parties each launched four at-large candidates during separate events in Road Town.

As the Virgin Islands Party introduced an at-large slate that includes three political newcomers, four National Democratic Party incumbents sought re-election by touting their record over the past three and a half years.

At the VIP event at the Band Stand, some 100 people sat under a green-and-white tent, and about as many milled around the edges of the field looking on.

Roxie Romney, the party’s Fourth District candidate, spoke first, followed by the at-large hopefuls, whose faces were projected on a large screen next to the stage: Dr. Karl Dawson, the president of H. Lavity Stoutt Community College; Charmaine Rosan-Bunbury, an attorney; Sharie De Castro, a former Miss BVI who at 24 is the youngest candidate contending the election; and Irene Penn O’Neal, a businesswoman who served as a government backbencher from 2007 to 2011.

Party president Carvin Malone acted as emcee, and each at-large candidate gave a short speech, touching on pet issues and eliciting cheers and air horn blasts from the audience.

Throughout the night, one message kept coming back: Standing in front of a banner that promised “Opportunities for All,” candidate after candidate argued that too many residents have been left behind by the current NDP administration.

They claimed that the VIP — whose 13 candidates include nine who have not held political office — offers fresh talent that would do better.

Later in the night, Third District incumbent Julian Fraser, the party chairman, laid out a “ten-year economic plan” that includes various promises: establishing a ministry of homeland security; opening a maritime and oceanographic sciences academy; building a junior high school; establishing a stock exchange and “currency and commodities market” in the territory; and launching a national development plan, among others.

Meanwhile, in the Sir Olva Georges Plaza, at least 300 people were tightly packed in chairs set up under blue-and-white tents.

Many attendees wore red shirts or caps with Dr. Smith’s name on them, and several others wore T-shirts printed with a photograph of Mr. Walwyn’s face.

Communications and Works Minister Mark Vanterpool, the Fourth District incumbent, served as emcee, and the party’s other district candidates sat facing the stage, flanked by members of the NDP youth committee.

The party’s at-large candidates gave longer speeches than their opponents across town, touching on wide-ranging topics.

But here, too, one message was repeated again and again: Standing in front of a banner that read “Action Speaks Louder than Words,” they claimed that their record over the past three and a half years should be reason enough to elect them to office to continue their work.

Major accomplishments, they said, include opening the new hospital, completing the cruise pier, launching an expanded technical school, and progressing with water and sewerage work, among others.

And if elected again, they promised, they will ensure that other projects they started will continue uninterrupted, such as the Wickhams Cay landside development, the hospital outfitting, and national health insurance.

They also made new promises, some of which were similar to their opponents’: building a junior high school; addressing the high cost of living; offering A-Level exams to 12th graders; building a medical campus in Road Town; and expanding medical tourism, among others.

Of the NDP’s 13 candidates, nine are incumbents, but the rest have not held political office: Shaina Smith in the First District, Melvin “Mitch” Turnbull in the Second, Kevin “OJ” Smith in the Third, and Hubert O’Neal in the Ninth.