Local News > VIP not in support of airport expansion

VIP not in support of airport expansion

The Virgin Islands Party is “not in support” of the proposed expansion of the Terrance B. Lett- some International Airport at this time, according to party Chairman Andrew Fahie. Speaking …

END_OF_DOCUMENT_TOKEN_TO_BE_REPLACED 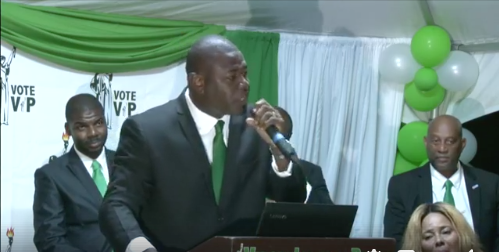 Carnel Clyne, a BvI Tourist Board officer who is vying to represent the Second District, speaks during his launch last Thursday in Cane Garden Bay. (Photo: FACEBOOK)

The Virgin Islands Party is “not in support” of the proposed expansion of the Terrance B. Lett- some International Airport at this time, according to party Chairman Andrew Fahie.

Speaking to reporters yesterday morning, he said there is no way government can justify spending more than $100 million on a “legacy project to its leader [Premier Dr. Orlando Smith] while people are still sleeping in community centres.”

Instead, he said, if the VIP is voted into office, it will focus on low-hanging fruit to increase tourist traffic and get “heads in the beds,” such as expanding ferry service and putting on more events. He added that the airport project may be revisited in the future once party members have a clearer picture of the financial state of the territory.

The announcement followed a series of VIP campaign events in recent days.
On Saturday, Mr. Fahie led a motorcade consisting of at least a dozen cars from Fort Recovery to the Cappoons Bay Recreation Grounds, part of his annual District One report and the formal launch to re-elect himself to the
seat he has held since 1999.

At the event, Mr. Fahie promised that the VIP will announce a “bold economic plan” designed to empower the people of the VI and “transform this territory district by district.”

Mr. Fahie — who is currently opposed only by businesswoman Stephanie Brewley of the Julian Fraser-led party Progressives United — claimed that even though two of the four parties have not fielded candidates to run against him, they are still “walking around the First District like Nicodemus by night, telling you your representative has done nothing.”

But he added that no one but him can claim credit for projects such as the West End jetty, the Cappoons Bay drainage system, and the revitalisation of the recreational grounds and the basketball courts.

“When they come to you asking about your representative, ask them which one of them they funded,”he advised .“And if you can find that, vote for them.”
Mr. Fahie went on to make several promises, such as consumer protection legislation, which has been discussed for years, including by the last VIP government.

He also addressed a common concern after Hurricane Irma: that insurers were trying to scam policyholders by claiming they were “underinsured.”

“If a next disaster hits, insurance companies will pay people their money,” he vowed.

“Voters do not want to hear about the $40 or $50 million [the government has] overspent on the pier park and hospital projects. … What voters want to hear about is where will the VIP get the funds and what they will do to improve our quality of life.”

Mr. Clyne had plenty of ideas to encourage innovation in his district and pack in more visitors to the already popular destination — everything from an underwater restaurant to a soap factory to dog walking services to a butterfly farm.

He gathered these ideas simply from walking through the district and speaking to residents, he explained.

“You know how crazy that would be to watch a caterpillar turn into a butterfly?” he asked the crowd of around 70 supporters.

Mr. Clyne, a BVI Tourist Board officer who was the latest candidate to be added to the VIP roster, explained that the success of Callwood Rum Distillery has proved that CGB can be a host to marketable products. He envisions more large events to bring in visitors, such as the annual spring music festival that fell by the wayside after Hurricane Irma, and a “goat festival”
on Jost Van Dyke.

“We need events of this calibre back now,” he said.

He proposed making JVD an official port of entry to the territory in order to en- courage visits.

He said he envisions a “centre for excellence for innovators,” both in this district and throughout the entire VI, that will align training and research and address skills gaps.

His candidacy is about “ways to create more opportunities for our flag-bearers,” he said, adding, “These entrepreneurship ideas are possible when you vote for me.”