During a three-hour press conference on Friday, Premier Andrew Fahie and Transportation, Works and Utilities Minister Kye Rymer highlighted the continuing post-pandemic economic recovery, which they said is helping the …

END_OF_DOCUMENT_TOKEN_TO_BE_REPLACED 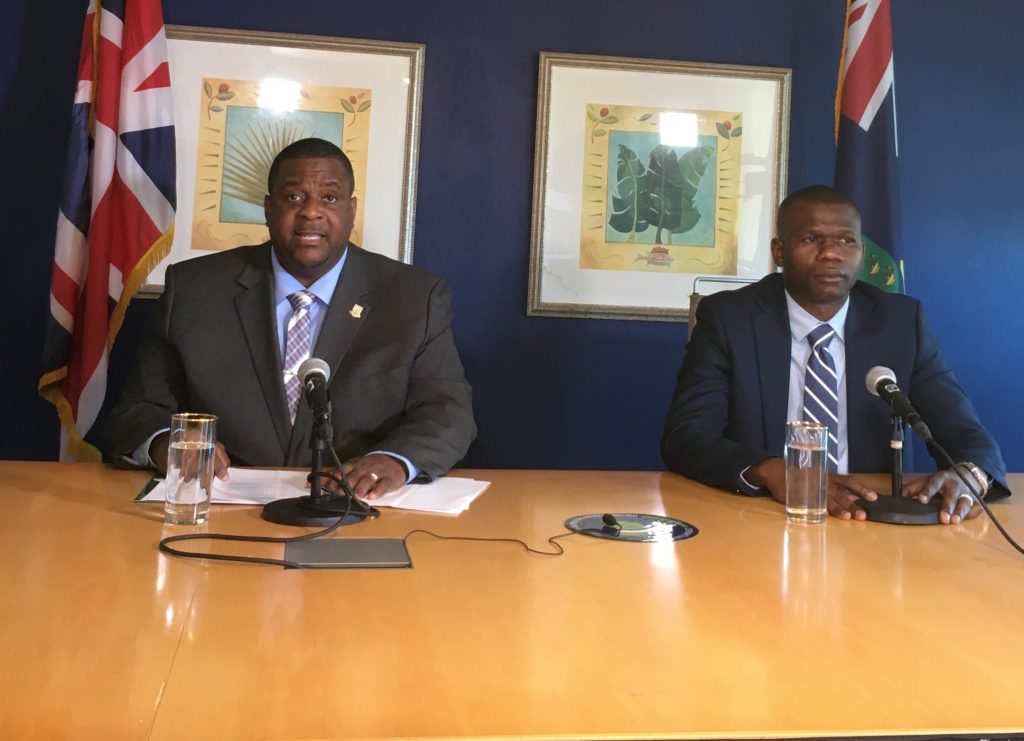 At a press conference on Friday, Premier Andrew Fahie and Transportation, Works and Utilities Minister Kye Rymer highlighted some of their recent achievements, and said that as the territory continues to recovery from the pandemic more are on the way. (Photo: JOEY WALDINGER)

During a three-hour press conference on Friday, Premier Andrew Fahie and Transportation, Works and Utilities Minister Kye Rymer highlighted the continuing post-pandemic economic recovery, which they said is helping the government make progress on legislating and finishing long-delayed capital projects.

Though Mr. Fahie blamed the pandemic for slowing his government’s work, he promised that with infections falling and tourism numbers rising his administration will be able to better focus on enacting new laws, and he pointed to the recently enacted Integrity in Public Life Act as an example.

“This is not to say that all is well, but this is to say your government continues to navigate this ship … through uncharted waters,” Mr. Fahie said.

The leaders also decried the continuing violence claiming lives of young residents, the most recent being Le’Shaughn Arr Smith, who police say was fatally shot in Huntums Ghut on Feb. 24.

“We cannot continue to lose … anyone anymore to violence or any other senseless crime,” Mr. Fahie said.

After the VI’s tourist economy plummeted following the onset of the pandemic in March 2020, signs of life are looking stronger, said the premier, who provided new figures of visitors to the territory.

The number of cruise ship passengers has been swelling too, with 72,263 cruise shippers landing in the territory between July and December, and 36,602 recorded in January, Mr. Fahie added. “With the commitments that we have already secured from our cruise partners, the prospects for the future look very, very positive,” he said, adding, “This is good news for our taxi drivers, tour operators, shops, restaurants, craft vendors and all the other businesses and people in our economy.”

Despite the recent strong showings, a December report by the Caribbean Tourism Organisation showed that the territory’s tourism recovery actually fared worse than the Caribbean as a whole in 2021.

Tourism was not the only aspect of the economy that has provided cause to celebrate, the premier said.

Except for taxes on international trade, which fell by about $7 million, “all revenue streams experienced growth over budget estimates,” Mr. Fahie added.

The financial services industry outperformed expectations, netting the VI about $190 million of revenue, which was about $10 million more than the budget estimate, Mr. Fahie said.

The trend of financial services revenue performing above budget estimates appears to have continued at the beginning of this year, as preliminary figures show that the industry collected $13 million in fees, about $2 million more than the budget estimate, he added.

He attributed some of the territory’s recent economic success to his refusal to accept the United Kingdom’s £300 pound loan guarantee to help the territory recover after Hurricane Irma.

Given the unforeseen events of recent years, including the pandemic, Russia’s invasion of Ukraine, global inflation and rising oil and gas prices, it was wise to not accept the loan guarantee at the time, Mr. Fahie said.

“Could you imagine if we had leveraged these Virgin Islands, and then, with these sudden and unforeseen spikes in the global economy, [if ] we had exceeded the ratios in the Protocols for Effective Financial Management, and the concerns that we were concerned about had been engaged?” Mr. Fahie asked.

In response to a later question, he said the loan guarantee is still on the table.

“We never told the UK we don’t want the loan guarantee: We just want to renegotiate some of the areas,” he said.

“And lately with new persons in positions, we have been able to bring this up in a more mature and professional manner.”

After opposition members blasted a July Cabinet decision that created the post of “ministerial political advisor,” Mr. Fahie announced on Friday that the name of the position has changed to “special advisor.”

When asked, he did not directly say whether the name change was influenced by the attention garnered by his earlier consultancy contracts with Claude Skelton-Cline, which drew scrutiny from the press and Commission of Inquiry for their opacity and unfulfilled deliverables, among other things.

However, he said that when he first awarded a contract to the consultant there was no “template” for such an arrangement.

“We do not have it covering … your political party agenda or your constituency agendas: It’s still based on getting the needs of the people done,” Mr. Fahie added.

The premier has so far hired national Sunil Ramjitsingh and Virgin Islander Kevin “OJ” Smith as his special advisors, and he said that he is looking for a third with experience in constitutional law and legislative drafting, he said.

The two junior ministers have appointed special advisors as well, the premier said, though he did not name them.

Friday’s press conference came roughly a month after government launched a fleet of six electric shuttles circling Road Town, which TWU Minister Kye Rymer described as one prong in the “Road Town Improvement Programme,” a broader effort to improve and beautify the city.

While answering questions from the media, Mr. Rymer pushed back against the suggestion that the recently launched fleet is the latest in a string of failed attempts to launch a viable shuttle service in Road Town.

A December 2019 pilot programme using shuttles borrowed from Romasco was a success, as was the shuttle service when it was resurrected in 2020 as part of a stimulus package to keep drivers paid, Mr. Rymer said.

He added that according to the most recently available figures, 1,100 riders have taken advantage of the service.

“I encourage motorists [and] pedestrians to utilise our shuttle service. We have a consistent service, and we are doing our part with … green energy in our territory,” Mr. Rymer said.

Apart from the continued works on the sidewalks on Admin Drive, which will have wheelchair-accessible ramps when completed, Mr. Rymer said his ministry is also improving the drainage at the intersection of Waterfront Drive and Admin Drive; widening eastbound lanes on the dual carriageway; and upgrading the drainage systems next to Bobby’s Supermarket, among other Road Town projects.

The first phase, which involves repairing and commissioning the sewage treatment plant near Paraquita Bay, should be finished by the end of the year, Mr. Rymer said.

He added that his ministry “is progressing steadfastly” with the rehabilitation of the Ralph T. O’Neal Administration Complex.

He said that workers have installed 75 percent of the doors and windows, and that this phase of the project is slated for completion by the end of this month.

After government signed a contract for basement access and drainage, works on those parts of the building are expected to begin this month, Mr. Rymer added.

Though he said that his administration “will surely be signing a contract for the entire building envelope repair, with works expected to commence in April,” he did not say when the building will be ready for occupancy.

He added he hopes to complete construction of a new bridge to Frenchmans Cay by May.

The bid for this project was awarded to Quality Construction for $350,753, and the completed bridge will be 30 feet wide and have six-foot guardrails, Mr. Rymer said.