After announcing in September that two foreign contractors with local partners had bid for the rehabilitation of the existing sand-and-gravel runway at the  Taddy Bay Airport in Virgin Gorda, the …

END_OF_DOCUMENT_TOKEN_TO_BE_REPLACED 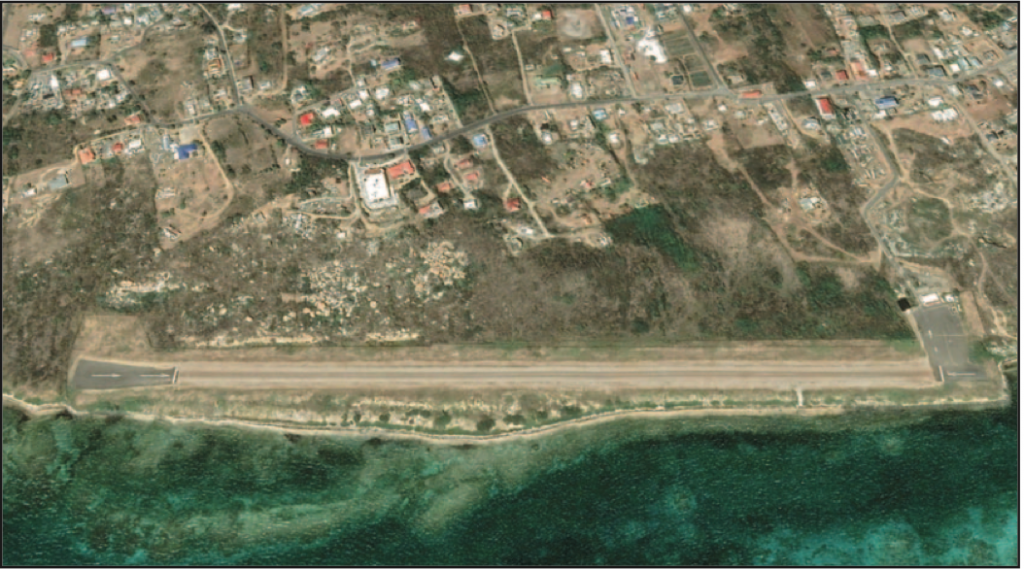 Plans are in place to pave the runway at the Taddy Bay Airport in Virgin Gorda, but the project was retendered last week after two previous bids were deemed not “acceptable.” (Photo: GOOGLE EARTH)

After announcing in September that two foreign contractors with local partners had bid for the rehabilitation of the existing sand-and-gravel runway at the  Taddy Bay Airport in Virgin Gorda, the BVI Airports Authority said earlier this month.

“The tender documents expressly state that BVI Airports Authority is not obligated to accept the highest or lowest — or for that matter any — offer made in response to its request for tender offers for the Virgin Gorda airport runway rehabilitation project,” BVIAA Chairman Bevis Sylvester told the Beacon in response to questions about a Nov. 3 press release announcing the re-tender.

“In the present case, BVIAA received two tender offers which the board, having reviewed and evaluated, was of the view that neither offer was acceptable and that it was therefore in the best interest of BVIAA to invite new tender offers for the project.”

The authority explained in the Nov. 3 press release that the rehabilitation will take place early next year during an airport closure, with “substantial completion” in May and runway grooving and final painting to
follow.

The specifications included in the re-tender notice differ slightly from the ones in the previous tender notice, which was issued in August. The major elements of the re-tendered project, according to last week’s press release, will be a common excavation of 8,000 cubic metres; runway grooving of 15,000 square metres; supply and placing of granular material of 6,500 cubic metres; placing of pavement line markings; and supply and placing of 5,000 tonnes of hot-mix asphalt.

The original tender notice issued in August specified a common excavation of 7,000 cubic metres; supply and placing of granular material of 6,000 cubic metres; and runway grooving of 13,000 square metres. The other specifications remained the same.

In September, the BVIAA announced that two foreign firms with local subcontractors had submitted proposals for the project.

Dexter Construction Company Limited of Nova Scotia, Canada, bid $9,464,001, according to the BVIAA. The company estimated that $3.9 million of its tender price would go to local sub-contractor EMCS Caribbean Limited.
Herzog Caribbean Limited of the Turks and Caicos Islands bid $6,991,399.64, and estimated that $600,000 of its tender would go to local sub-contractors including Guardian Surveying Services, the BVIAA stated.

Both companies appear to have related experience. In 2013, Dexter — which is part of a larger Canadian entity known as the Municipal Group of Companies and claims to be the largest civil contractor in Atlantic Canada — completed a renewal and reconstruction of the Halifax Stanfield International Airport runway, ac- cording to its website.

In 2017, Herzog completed a $20 million redevelopment of the South Caicos Airport, including the runway, terminal and other areas, in Turks and Caicos, according to its website and the newspaper TC Weekly.

The Beacon contacted EMCS, Dexter and Herzog for
comment, but they did not immediately respond. Guardian Surveying Services could not be reached.

According to last week’s press release, packages for the re-tender were made available Nov. 4, and can be obtained by contacting BVIAA Deputy Managing Director Luce Hodge-Smith by email at lhodgesmith@bviaa.com.
To visit the site, bidders must contact Ms. Hodge- Smith by next Tuesday. The tender will be open for bidding for approximately five weeks, the authority stated, adding that more information would be provided in the tender documents.

The previous tender required a bid bond or certified cheque for 10 percent of the tender price, and a consent of surety or agreement to bond for 50 percent of the proposed contract value. The required labour and materials bond remains the same.

The evaluation process will consider bidders’ experience in similar projects; proposed equipment and other resources; project team experience; proposed use of local sub-contractors and resources; work programme and schedule; and understanding of the project, the re-tender notice stated.

In a statement to the House of Assembly in February, Premier Andrew Fahie said the paving “will expand the scope of aircraft that currently use the aerodrome, which could make flights from the [United States] mainland to Virgin Gorda a reality.”

At the time, he added that Mr. Sylvester and representatives from the BVI Tourist Board were meeting with “two airlines currently operating in the territory to ascertain which additional routes can be had as a result of the runway being paved.”

In the September press release, Mr. Sylvester described the project as “yet another key initiative of the Andrew Fahie-led government of the Virgin Islands to both build economic resiliency throughout the entire [VI], as well as jump-start local infrastructure projects to assist in offsetting the economic downturn resulting from the Covid-19 virus.”

The September release added that the project is expected to contribute “millions of dollars to the local Virgin Gorda economy both during and after the construction, as the newly paved runway will enable larger planes to operate with greater safety and frequency to the island.”