Rain didn’t stop nearly 60 people from attending the third Poetry Grand Slam on Saturday night, when poets and other performers took the stage for a chance to win a …

END_OF_DOCUMENT_TOKEN_TO_BE_REPLACED 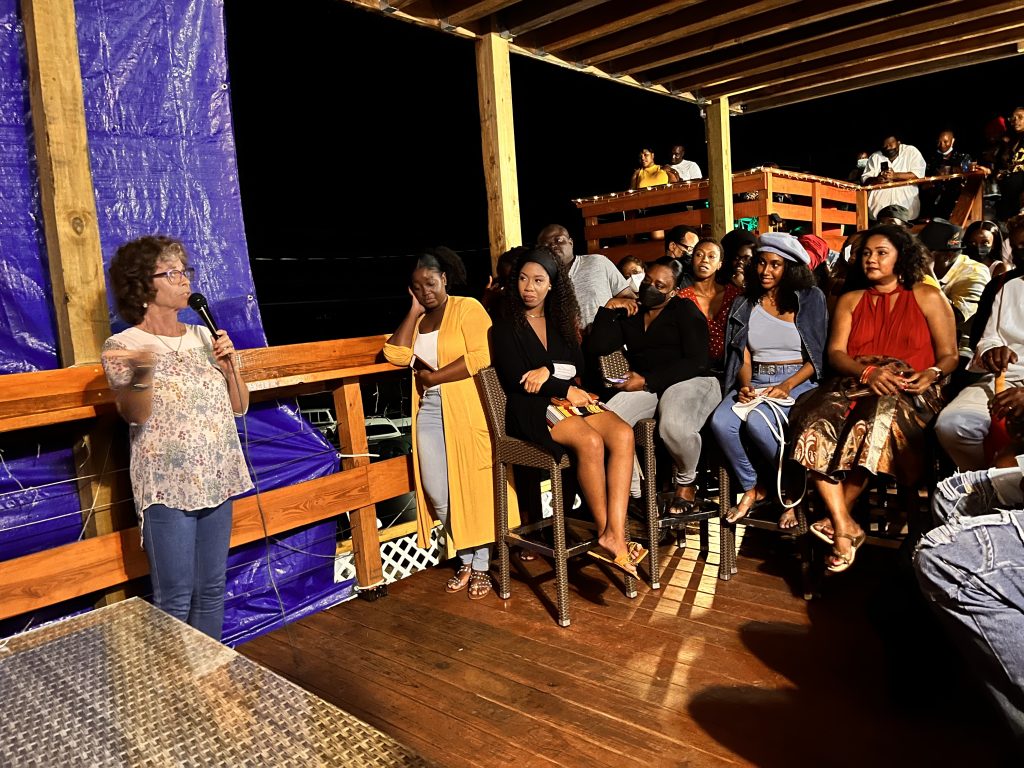 Rain didn’t stop nearly 60 people from attending the third Poetry Grand Slam on Saturday night, when poets and other performers took the stage for a chance to win a grand prize of $1,000 at Rose Duck N’ Dive in Brandywine Bay.

“My soul had known this soil and sand before it had memories to recollect,” she recited. “I could name every bruise this land has gifted me, could map coordinates to the cherry trees that housed and fed me on my way home from school in the afternoon sun.”

Her poem centred around her experience as a Virgin Islander — and what she would like to tell a stranger who asks her where she comes from.

During the slam, she and 21 others shared poems on a wide variety of topics, ranging from autonomy to happiness.

The event was hosted, organised and coordinated by April Glasgow and Jovan Wil- son of the Callaloo Poets and Artists Collective and was the first of its kind since the beginning of the pandemic.

“We decided that since we weren’t able to do the poetry slam for two years that this was a good time, especially now that the protocols are easing, and also just to keep the appetite for poetry open in the Virgin Islands,” Ms. Wilson said.

Though the organisation usually hosts an observance of World Poetry Day on March 21, the group waited until April to “dive into the power of poetry,” she added.

The slam contestants were judged mostly on content and delivery, but other aspects of their performances were also considered.

“We looked at things like eye contact, body language, delivery of words, how they enunciated, and their rhythm and flow,” Ms. Wilson said. “With an open mic competition, we listened for sound, delivery and pitch. All of those pull the audience into the story that the poet is trying to tell.”

She added that the poetry slam this year was “nothing short of a grand success.”

“We were very pleased about the diversity, not only in respect to the age but also the content that was displayed,” she said. “We also saw people placing a very special emphasis on performance, and it just really speaks to how powerful the arts is and how engaging it is.”

Ms. Wilson added that the large turnout was a “testament” to the idea that there is an appetite for poetry within the territory. Open mic sessions, she said, are held monthly at Rose Duck N’ Dive.

“That’s largely due to the minister [of education, culture, youth affairs, fisheries and agriculture] pushing for it,” she added. “It’s something that he believes in.” The prizes — $1,000 for first place, $500 for second place and $250 for third place — were sponsored by the government.