Seven people lay on the floor of the Virgin Gorda Seventh-day Adventist Church amid objects strewn around like debris. Some lay motionless and other cried out in apparent pain as …

END_OF_DOCUMENT_TOKEN_TO_BE_REPLACED 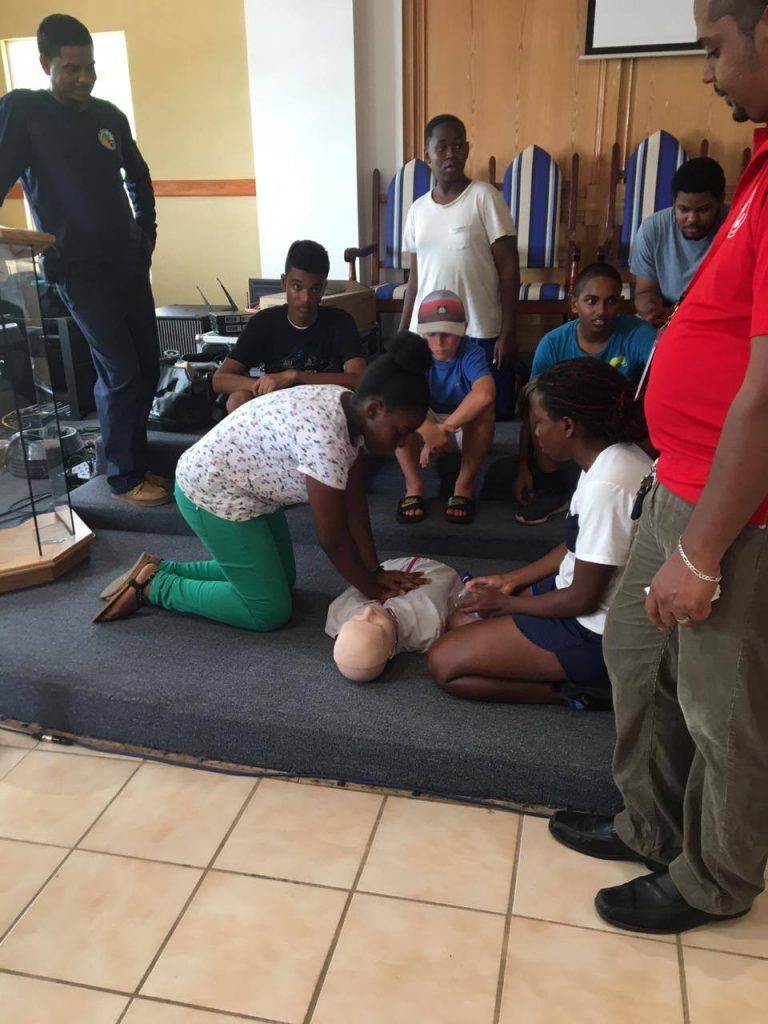 Seven people lay on the floor of the Virgin Gorda Seventh-day Adventist Church amid objects strewn around like debris. Some lay motionless and other cried out in apparent pain as teenagers rushed in to help.

The “casualties” were actors, and the teens were responding to a simulated explosion last week as part of a three-day training session offered through the Teen Community Emergency Response Team programme.

Among the “victims” was Jesse Cooke, a high school student who pretended to be suffering from a broken rib and an epileptic seizure. His simulated conditions rendered him helpless, but the trainees quickly took the actions required to stabilise him.

Meanwhile, new “patients” were rolling in by the minute, and the participants had to respond quickly.

The day was typical for the Teen CERT trainees, who learned how to respond to various dangerous scenarios that can take place in real life.

“Teen CERT was a great and very fun experience for me,” said participant Treviann John. “It bettered my everyday life knowing that I can assist some- one properly in case of a sudden emergency.”

On the first day, participants were divided into groups and asked to use VHF radios to retrieve items hidden around the compound.

The training was led by Department of Disaster Management Training Manager Carishma Hicks and Emergency Communications Officer Jacob Adolphus, but it also included other guests such as members of the BVI Red Cross and the Virgin Gorda Fire Department.

“Teen CERT programmes began before Irma in the year 2014, but since Irma — and seeing that educational infrastructure facilities sustained damage — what we ought to do is increase the capacity in terms of providing teens with the basic emergency response skills,” Ms. Hicks explained.

One of the primary lessons stressed throughout the training was the importance of teamwork.

On the first day, participants were divided into groups and asked to use VHF radios to retrieve items hidden around the compound.

Other team activities followed, with each group either passing or failing together.

Participants also were introduced to the CERT motto: “Doing the greatest good for the greatest number of people.”

However, Mr. Adolphus also had words of caution about that directive.

“When doing the greatest good for the greatest number, … you should also be mindful of personal safety,” he warned.

Participants watched videos and conducted hands-on activities designed to teach them how to respond to emergency situations including asthma attacks, epileptic seizures, broken bones, unresponsiveness, and others.

Though no more sessions are currently scheduled, schools can reach out to the DDM and request them.

No adult CERT trainings have been held so far this year, but refreshers are planned for existing groups to make sure their certificates are up to date, according to Ms. Hicks.