Virgin Islanders reflect on Windrush scandal in the UK

Douglas Wheatley was 15 when he first journeyed to the United Kingdom in 1962 to attend school. He remained for about three years — unlike many of his peers from …

END_OF_DOCUMENT_TOKEN_TO_BE_REPLACED 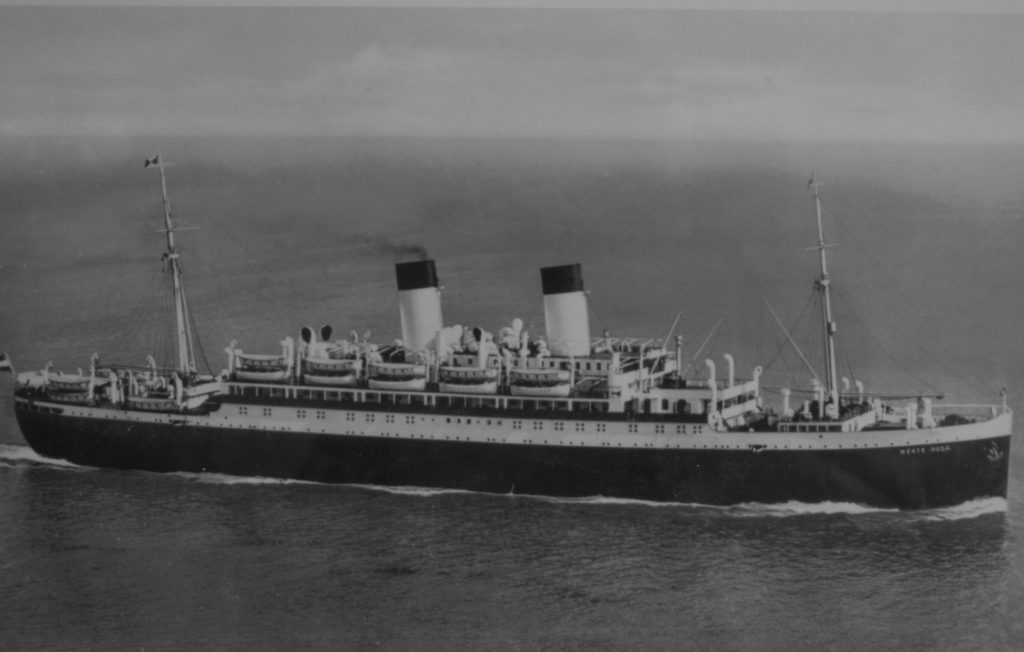 The Empire Windrush ship, originally the SS Monte Rosa, brought hundreds of Caribbean migrants to the UK in 1948. (Photo: A.DAVEY/FLICKR)

Douglas Wheatley was 15 when he first journeyed to the United Kingdom in 1962 to attend school.

He remained for about three years — unlike many of his peers from elsewhere in the Caribbean, who stayed in the UK to get jobs, start families and begin lives anew.

Still, he identifies as a member of the Windrush generation, and as the controversy heats up about the treatment of that wave of Caribbean migrants — who began emigrating in 1948 when the UK, seeking workers to fill postwar labour shortages, passed the British Nationality Act to grant citizenship to residents of British colonies — that time of his life is on his mind once again.

“In those days you used to have banana boats coming down to Trinidad and St. Lucia and it was easy to travel to London, … to the Caribbean,” he said. He recalled that he and a school friend attempted to get on one but couldn’t manage, so he ended up going by plane.

“It was one of those four-engine planes that took you forever to get to London,” he said.

Mr. Wheatley was one of thousands of Caribbean citizens who migrated to the UK between 1948 and 1971. Precise numbers are difficult to determine because many arrived as children, often on their parents’ passports — though one historian estimates that the West Indian-born population in the UK grew from 15,000 in 1951 to just under 300,000 in 1981.

It all began with the Empire Windrush, a former troop ship that left Jamaica in 1948 with 492 men, women and children aboard, the majority from Jamaica, Trinidad and Tobago, and British Guiana (now Guyana). Most were lured by advertisements for the plentiful jobs available in the UK’s booming postwar economy.

The era ended with the Immigration Act of 1971, when the right of abode in the UK was restricted to those with a prior link to the country.

However, the Windrush migrants, along with all other Commonwealth citizens already living in the UK, were given indefinite leave to remain.

But government record-keeping was spotty at that time, and in 2010, during a move to a new building, the Home Office deliberately destroyed thousands of landing card slips recording Caribbean immigrants’ arrival dates in the UK — though some employees reportedly warned them it would cause difficulties.

Mr. Wheatley said that he returned to the UK years ago and spoke with Caribbean migrants, the majority of whom settled in Brixton, London. Some of them wanted to return to their country of origin, but dared not.

“They told me at the time that they were not too happy being in the UK but they didn’t have anything to show their [status] in the UK [upon their return],” he said. “So they remained there.”

Fast forward to today when the current administration, led by Prime Minister Theresa May, has sought to crack down on illegal immigration.

Suddenly, members of the Windrush generation who have lived in the UK for decades have lost their jobs, been denied health care, and faced potential deportation because they cannot prove they have a right to live in the country.

“Because you have a new set of people holding those key positions in the UK, they have decided they don’t want too many migrants there,” Mr. Wheatley explained. “Already they have three million from the EU. They don’t want people accessing the health care services. They’re bringing a lot of pressure on them.”

MP David Lammy, who is of Guyanese descent, has called the government’s failure to act a “national shame” that is “inhumane and cruel.”

Initially, then-Home Secretary Amber Rudd called the treatment of the Windrush generation “wrong” and “appalling.” However, a leaked memo sug- gested that she had misled MPs about having “targets” for deportations, and on Sunday she resigned, saying that she had “inadvertently misled the Home Affairs Select Committee […] on the issue of illegal immigration.”

Her replacement, Sajid Javid, spoke in the House of Commons about his thoughts when he heard about the Windrush issue: “I thought that it could be my mum, my brother, my uncle or even me.”

Dr. Richard Georges, a VI-based writer and teacher who has been following the controversy, said, “At this time, Britain was the nation to which inhabitants of the countries of the Empire belonged. According to the British Nationality Act of 1948, every single person who arrived on the Windrush and subsequent ships was a British citizen by right.”

He added in a Facebook post, “Many of these people have held UK passports, [National Health Service], and [National Insurance] numbers. This is not a case of them needing to apply for rights. Those rights were theirs until the Home Office stripped them away arbitrarily.”

Now, to assist those affected, the Home Office is setting up a dedicated task force, including a hotline and website for those who need help gathering evidence of their right to be in the UK.

Earlier this month, Ms. May met representatives from 12 Caribbean Commonwealth states: Antigua and Barbuda, the Bahamas, Barbados, Belize, Dominica, Grenada, Guyana, Jamaica, St. Kitts and Nevis, St. Lucia, St. Vincent and the Grenadines, and Trinidad and Tobago. All are former colonies that are now independent countries.

During the meeting, Ms. May apologised and said that the contributions of the Windrush generation is valued, adding, “Those who arrived from the Caribbean before 1973 and lived here permanently without significant periods of time away in the last 30 years have the right to remain in the UK.”

According to Sylvia Moses, director of the BVI International Affairs Secretariat, there were likely few, if any, Virgin Islanders directly affected by the current Windrush row.

“During that period, the migration route for BVIslanders was to the USVI and then the US, which at the time we did more trading and commerce with,” she explained. “The recruitment of Caribbean people was more centred on the larger Caribbean countries like Jamaica, Trinidad and Guyana; and so the British Virgin Islands was not among the countries where nationals were recruited from.”

Of course, that did not preclude Virgin Islanders, such as Mr. Wheatley, from going to the UK. But most, like him, were likely there on a temporary basis. According to Ms. Moses, “While there might have been a small number of BVIslanders who went to the UK during that time (more so for educational purposes), there is no information to support that we were actual members of the Windrush generation.”

‘Suddenly they were gone’

Business owner and BVI Olympic Committee cofounder Rey O’Neal went to high school in Antigua in the late 1950s and early 1960s, and recalls saying goodbye to many members of that generation.

“There were two ships, the Ascania and Irpinia, that took persons to the UK on a large scale,” he said. “You were in the class with that person and suddenly they were gone.”

He added that he knew of “a few young men from the BVI who went to the UK,” probably in the late 1950s.

However, he added, “I’m talking about elderly men [now].”

He also knew a few who later returned from the UK but have since died, and he lost track of their families.

Mr. O’Neal agreed with Ms. Moses’ assessment that countries such as Jamaica, Trinidad and Barbados “would have had the largest number of migrants. Emigration from the BVI would have been small.”

Also to his knowledge, none of the VI migrants during that era would have brought children with them.

Mr. Wheatley also pointed out that the VI was included in the British Overseas Territories Act 2002, which specified that British OT citizens are full British citizens.

Ashton McCall was born in Montserrat but now lives in the VI. He went to the UK in 1948, the same year as Windrush, with two of his cousins, who have since died. He doesn’t remember the name of his ship, but he said during that time he was treated as a British citizen.

“I used to work; I used to pay National [Health] Insurance,” he said. “In fact, they were calling to put me in the Army.”

However, the status of Virgin Islanders in the UK has changed over the years as Parliament has amended immigration law.

During the time Mr. Wheatley lived in the UK, Parliament passed the Commonwealth Immigrants Act 1962, which made British citizens whose passports were not directly issued by the government of the UK (such as by the governor of a colony, which the VI was at the time) subject to immigration control.

The new laws were “very stringent,” Mr. Wheatley said. “I was asked to go up to the Home Office and get my BVI passport stamped so I could remain indefinitely in the UK,” he explained. “[They told me], ‘Now don’t ever lose this passport, because it was stamped and you have the right to remain here ad infinitum.’ A couple years later I lost the passport.”

He had to go back to the office and do it all over again. “The next time, I just didn’t bother,” he said.

By 1971, the wave of immigration had come to an end, but a generation remained.

Mr. Wheatley said he spent three years in the UK. “I had intended to stay a lot longer,” he said.

But like other members of the Windrush generation, he faced racism, including an incident he preferred not to discuss on the record but that was a major catalyst for his leaving the UK.

Over the years, Mr. Wheatley has spoken to migrants who arrived the same time he did, many of whom settled in the Brixton area of London. He observed that many “had a very, very difficult time.”

“Even though many had served in the armed forces during the Second World War, some of them were slighted,” he said. “It was difficult to get housing and so on.”

Mr. McCall said he, like many of the Windrush generation, experienced racism associated with the various far-right movements that formed in the
UK in the 1950s and 1960s.

In particular, a subculture of young men known as the Teddy Boys became known for violently targeting blacks. “They used to cause problems,” he recalled. “The bureaucrats used to set [blacks] up and get them in trouble.”

Still, he said he “loved” living in the UK. “There’s always racism any part of the planet you go; we can never get rid of it,” he said. “It started from the big book, the Bible.”

Meanwhile, Dr. Georges and Mr. Wheatley said they would like to see the VI government stand in solidarity with the rest of the Caribbean on the Windrush controversy.

Dr. Georges urged the government to “issue a joint statement that expresses concern and support for our fellow Caribbean British citizens who have been disenfranchised in this debacle.”

The UK, he added, should “apologise and compensate” victims without characterising the gesture as “any sort of charitable or benevolent act.”

Dr. Georges said that no matter who is affected, it’s not wise for residents of this territory to look away from those now having to prove that they are citizens after decades of living in the UK.

“We hold UK passports,” he said. “If we moved there and our territory subsequently became independent, we’d be in the same position as these poor folk.”