During an investiture ceremony on Friday at Government House, businessman and philanthropist Peter Haycraft was awarded the Order of the British Empire from the Queen for his services to the …

END_OF_DOCUMENT_TOKEN_TO_BE_REPLACED 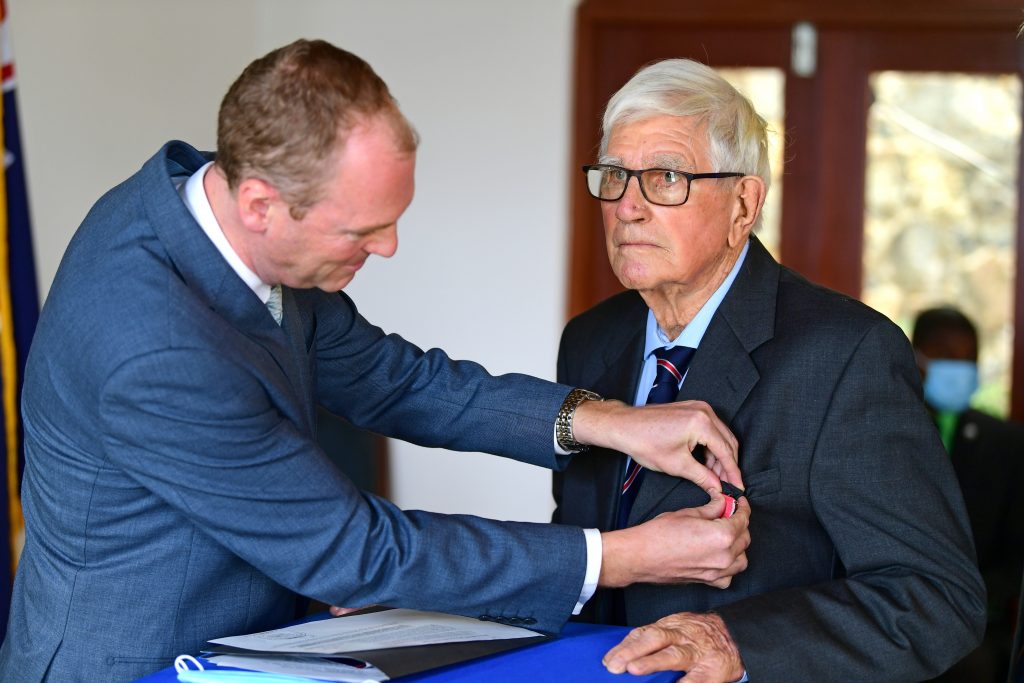 Governor Gus Jaspert pins a medal on Peter Haycraft, who was awarded the Order of the British Empire. (Photo: RONNIELLE FRASER)

During an investiture ceremony on Friday at Government House, businessman and philanthropist Peter Haycraft was awarded the Order of the British Empire from the Queen for his services to the Virgin Islands.

Mr. Haycraft migrated to the Virgin Islands in 1959 to run a ferry service between Tortola and St. Thomas, and he later founded Road Town Wholesale and Rite Way Food Markets.

An avid sailor, he has served as commodore of the Royal BVI Yacht Club on 13 occasions and was one of the original organisers of the BVI Spring Regatta, which is now recognised as a leading sailing event in the Caribbean.

Following Hurricane Irma, Mr. Haycraft also contributed more than $1 million to rebuild Enis Adams Primary School, where his wife Penny Haycraft has worked as a teacher, into a state-of-the-art facility.

“For the past 60 years the name Peter Haycraft has become synonymous with entrepreneurship, innovation and community support,” Governor Gus Jaspert said during the ceremony. “I am very pleased to see Mr. Haycraft honoured with an OBE for his philanthropic work.”

Mr. Jaspert presented Mr. Haycraft with the traditional insignia and royal warrant in the presence of a small group of Mr. Haycraft’s friends, family members and past honourees.

In his response, Mr. Haycraft extended gratitude to supporters including his wife, son Chris, and daughters Susan and Julie, who live overseas. He also thanked the people who nominated him for the award, and others who wrote letters of support.

“It’s important for you to know that you all have contributed, through loyalty or friendship, to me achieving this honour,” Mr. Haycraft said, adding, “Penny and I have never regretted for one moment the decision back in 1960 to make Tortola our home.”

Mr. Jaspert also thanked the BVI Honours Committee, which works within the community to help identify individuals who have made significant contributions to the VI and to submit nominations to the Queen’s Honours list every year.

Robert Mathavious and Stacy Mather also received honours from the Queen this year for their services to the territory.