“No justice, no peace!” The cry rang out through Road Town on June 20 as hundreds of residents stood in solidarity with the Black Lives Matter movement, marching down Waterfront …

END_OF_DOCUMENT_TOKEN_TO_BE_REPLACED 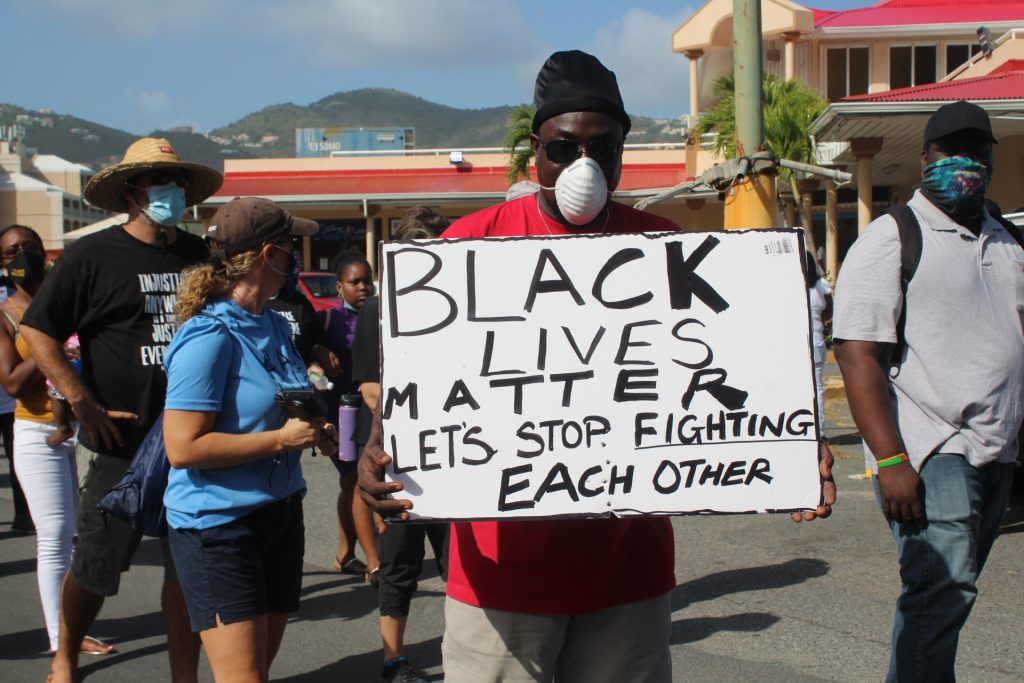 The cry rang out through Road Town on June 20 as hundreds of residents stood in solidarity with the Black Lives Matter movement, marching down Waterfront Drive and cheering on speakers at the Queen Elizabeth II Park.

The event ended with participants kneeling for eight minutes and 46 seconds — the same amount of time a Minnesota police officer knelt on George Floyd’s neck before he died on May 26.

Outrage over the killing of Mr. Floyd in Minneapolis sparked demonstrations in more than 60 countries and all 50 states in the United States of America.

The march was the first such event in the Virgin Islands, and organiser Nicoy Hendrickson explained why the movement is important to the territory.

“[Something] that we are not mindful of in the BVI is that we have the luxury of living with the illusion that we don’t have to be fearful of certain injustices and stomp out certain prejudices,” the 21-year-old said during a speech at the park. “That’s why this Black Lives Matter movement should be prominent not only in other countries but also right here in the BVI.”

Starting at 2:30 p.m. at the Noel Loyd Positive Movement Park, participants showed up carrying signs and wearing printed shirts for the protest, or they created their signs and bought shirts at tables set up by organisers.

Once a large enough crowd gathered by around 3 p.m., the march kicked off with words of prayer. Participants wore masks, and many police officers followed the march down the road.

With the sound of Bob Marley’s “Get Up, Stand Up” playing through the speakers of a pickup truck at the front of the procession, the peaceful protest began in front of First Caribbean International Bank.

As participants made their way toward Waterfront Drive, they waved signs, chanted and demanded an end to racism.

Mr. Floyd was accused of using a counterfeit bill and handcuffed facedown on a street in Minneapolis when officer Derek Chauvin placed a knee on his neck.

After repeatedly telling the officer “please” and “I can’t breathe,” Mr. Floyd went silent and motionless. Even after this, Mr. Chauvin, who is now charged with murder, did not remove his knee until an ambulance arrived.

Mr. Floyd was pronounced dead at the hospital, and a private autopsy report commissioned by his family found he had died due to asphyxiation from sustained pressure.

Mass unrest in America followed the death. People in more than 2,000 cities protested on June 13, and demonstrations have continued since then, overlapping Juneteenth, the annual June 19 observance that marks the emancipation of slaves in the United States in 1865.

Many of the protests were peaceful, but some turned into riots and looting while police responded with brutality. More than 62,000 National Guards were activated, and about 11,000 people have been arrested, according to Forbes magazine.

The protests have led to many legislative reforms de- signed to address police misconduct, systemic racism, and police brutality. Removal of Confederate monuments and statues, and the banning of Confederate flags, also occurred in many states. During the American Civil War, the Confederacy fought to keep slaves while the Union fought to free them.

Additionally, the plaza in front of the White House was renamed Black Lives Matter Plaza.

During the BLM demonstration in the Virgin Islands, Dr. Drexel Glasgow shared his story and explained why he believes the movement is important to the VI.

“As Nicoy said, several of our people, several of our sisters or brothers, family members, live in America,” he said. “What happened to George, it’s a real situation. I actually had something happen to me that could’ve gone south really, really quickly.”

As a student in Florida, he said, he went to a fast-food restaurant for a chicken sandwich, but was harassed by a police officer who used excessive physical force against him. At one point, the officer held a gun to his head, all for a crime he didn’t commit.

“I have always been respectful. I was studying for my PhD at that time. So what gave them the indication that I was the problem?” he said. “Everything that happened to George, it brings home a message. … The murder of George Floyd was a defining moment.”

The fight isn’t just about racism, he and other speakers said: It is a fight against injustice in general. That includes white supremacy and colourism, Mr. Hendrickson added.

Along with songs and poetry readings, the protest lasted until 6:30 p.m., eventually ending with participants kneeling for the same amount of time the police officer kneeled on Mr. Floyd’s neck.

On June 22, elected officials commented on the march in the House of Assembly, expressing their gratitude to those who organised it.

Likewise, Transportation, Works and Utilities Minister Kye Rymer said he wants to encourage the same youths to “be the voice for what they think is right for this community.”