Sherine Smith was excited as she took the 9 a.m. ferry from Road Town to see her favourite troupe, the Hugga Bunch, perform in the Adult Parade at the 70th …

END_OF_DOCUMENT_TOKEN_TO_BE_REPLACED 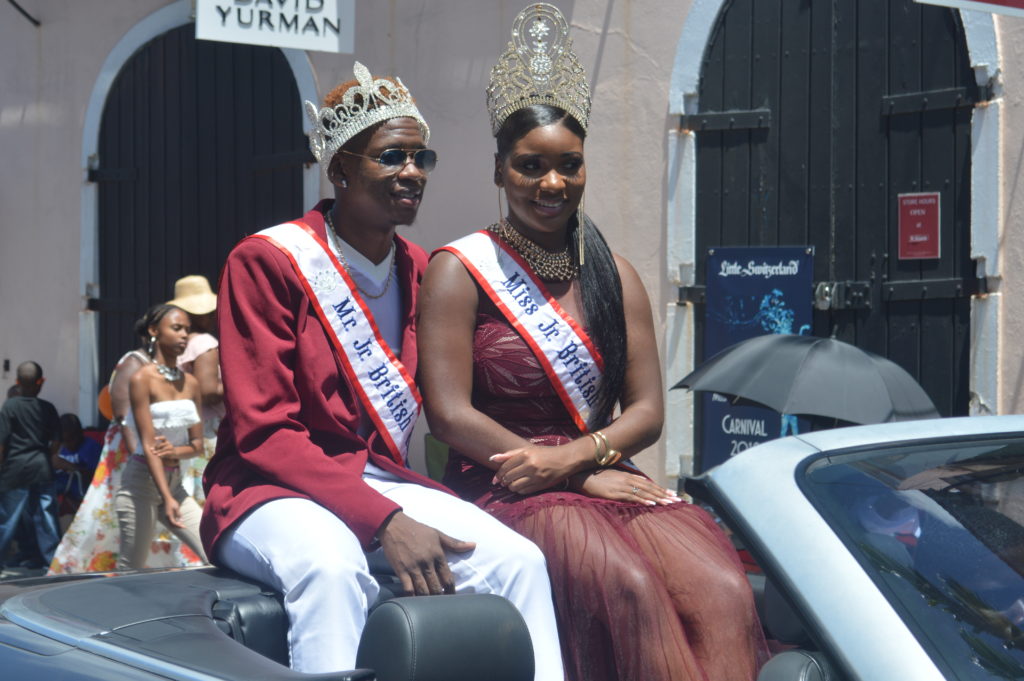 Photo: CLAIRE SHEFCHIK Mr. and Miss Junior BVI, Yohance Smith and Anondah Hodge, ride in the back of a car during the St. Thomas Carnival’s Adult Parade on Saturday.

Sherine Smith was excited as she took the 9 a.m. ferry from Road Town to see her favourite troupe, the Hugga Bunch, perform in the Adult Parade at the 70th St. Thomas Carnival on Saturday.

“They’re always the last and best,” she said. “I went last year for the first time, and now I want to go back every year because it was so much fun.”
She was among many residents from this territory to take part in the St. Thomas festivities.

Local bands VIBE and OMG both performed at multiple venues during the celebrations, though VIBE ended up missing the Saturday parade and sending a nearly empty float down Main Street.

OMG also sat out the parade, but performed Friday in the Carnival Village and at Krush Nightclub, teaming up with VIBE to compete against two United States VI bands — Cool Breeze and Venomous Poizon — under the banner “USVI vs. BVI: The Ultimate Showdown.”

Rickey Conner of OMG said he thought his band “represented the British side of the Virgin Islands extremely well. St. Thomas is no strange place for us and we love performing in St. Thomas.” He reported a great turnout, with plenty of familiar faces. “Many fans and supporters from the BVI came out in support of the home bands as well,” he said.

Mr. Conner added that the event was great practice as the band strengthens its performances and gears up to compete for the Road March title during Tortola’s 2018 August Emancipation Festival.

Both VIBE and OMG have frequently faced off during the march, with OMG having yet to win and VIBE having won three times in a row.

Visitors
Under the theme “Embrace our Culture, Music and Cuisine,” hundreds of performers, including steel orchestras, majorettes and troupes of dancers in dazzling feathers and rhinestones pranced their way from Western Cemetery to Lionel Roberts Stadium, led by grand marshal troupe Elskoe and Associates.

Many of the themes, such as construction workers and butterflies, reflected the tough year the USVI has had after being hit by two Category Five hurricanes.

Sonniel Pickering, another VI resident, was in the parade, riding on the Xtasy Carnival Troupe float at the invitation of his friend, one of the musicians.
Xtasy, with vivid green-and-yellow flower-themed costumes, was among the largest troupes to march.

“I’ve been to the St. Thomas Carnival many times,” Mr. Pickering said. “They are always happy to have us there, and especially this year.”

On the ferry on the way back, Mr. Pickering was joined by Miss BVI Kephra Sylvester, Mrs. BVI Zoe Walcott-Mcmilan, and Mr. and Miss Junior BVI, Yohance Smith and Anondah Hodge.

The group had received a warm welcome from the crowd at Emancipation Square before heading back on the 4:15 p.m. ferry to Road Town.

“One of my favourite parts is how many familiar faces we see,” Ms. Hodge said. “We love going over there.”