The sounds of campaigning filled the streets of Road Town Friday night as the Virgin Islands Party held a launch for its at-large candidates. Across the street from Digicel, a …

END_OF_DOCUMENT_TOKEN_TO_BE_REPLACED 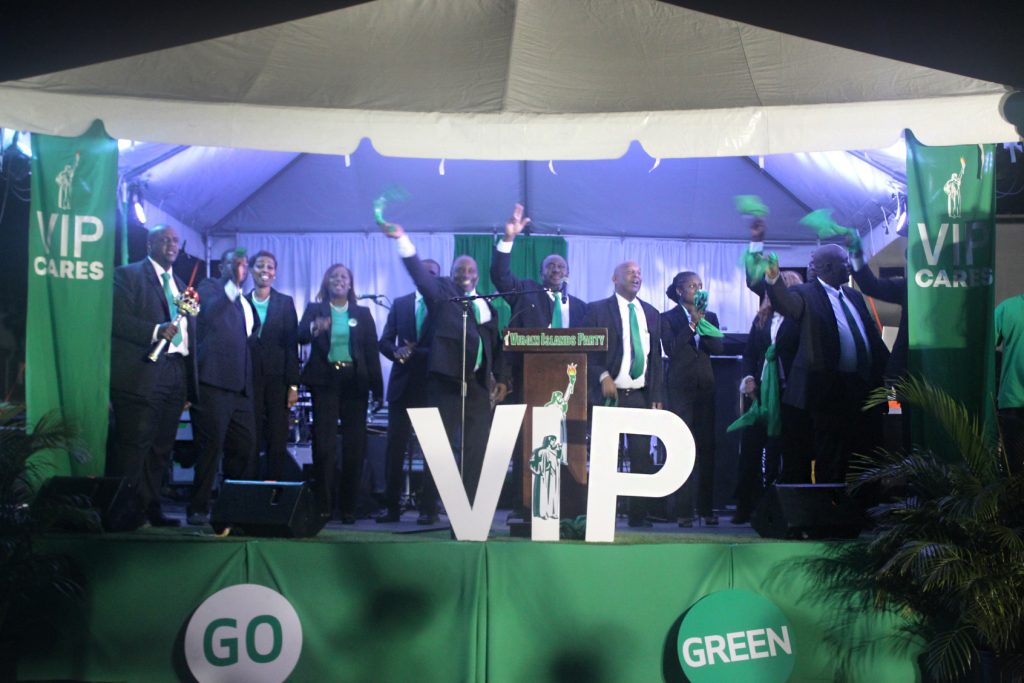 The Virgin Islands Party held a launch for its at-large candidates Friday night in the centre of Road Town. (Photo: Zarrin Tasnim Ahmed)

The sounds of campaigning filled the streets of Road Town Friday night as the Virgin Islands Party held a launch for its at-large candidates. Across the street from Digicel, a stage, tents and chairs were set up to host more than 150 people from across the territory.

Attendees heard from Shereen Flax-Charles, Neville “Sheep” Smith, Sharie De Castro and Carvin Malone, who were voted in by the 76-member VIP Congress in December.

A live band and emcee accompanied “Team VIP,” raising the momentum in the downtown crowd as the candidates walked onto stage waving green-and- white flags.

Luce Hodge-Smith, candidate for the Fourth District, led the launch by welcoming all the guests who came to hear what the at-large candidates had to say.

Next up was Arlene Smith-Thompson, the VIP candidate for the Third District, who shared stories about each of the at-large contenders before inviting Ms. Flax-Charles to the stage.

“We will be in that seat at the table and we will be in the fore- front of decision-making in our country,” she told other women in attendance. “I am not perfect, but I am 100 percent committed to do the right thing for our people and our country.”

“There are years that come along once in a generation,” he said, “The kind that makes a clean break from the trouble of past and set a course for our territory.”

He said he envisions a community that works together, puts education first and invests in infrastructure.

Ms. De Castro, who at 28 is one of the youngest candidates in the race, took the stage urging listeners not to see her as a candidate, but as a common citizen. “Tonight, I want to approach you as a citizen, a voter, just like you,” she said. “Someone who is required to vote for my future as well as yours.”

Ms. De Castro spoke about goals including improving health care on sister islands, reaching the territory’s full potential in tourism, and securing jobs for Virgin Islanders who are well qualified. She also touched on the impact of Hurricane Irma.

“No nation could ever be ready for such an occurrence,” she said, but later added, “The worst part of the storm was the inability of all leaders to lead.”

Carvin Malone, who served as VIP president for many years, was the final speaker of the night.

“I am excited about the bright future filled with hope and opportunity,” he said. “But why should you care … until you know how much I care?”

Mr. Malone then described the current government as one riddled with “excessive greed, lack of priorities, lack of accountability, lack of transparency, and lack of conscience.”

Over the past week the VIP also held five district rallies.

On Feb. 6, Seventh District candidate Natalio “Sowande Uhuru” Wheatley recalled his youth, which he said could suggest a way forward.

“Those were the days we lived as one before the fabric of our society began to tear apart,” he said.

He added that he’s seen massive changes since then: increasing crime, a crumbling infrastructure, a lack of economic diversification, poor management of the government finances, and increasing poverty.

“I am a fighter for the people,” he said. “It is in my DNA. I got involved in my community. I got on the radio to keep you people informed. I visited schools promoting history, culture and creative expression. I taught poetry at the prison. I joined the Lions Club.”

He promised to advocate for partnerships that will help bring tourism revenue into the seventh district, host events that bring the sectors and nationalities of the district together, and lead beautification campaigns that will help the district “truly go green.” This includes recycling and solar energy.

“Even when you don’t hear my voice, you will see my actions,” he said, adding, “Team VIP is here to the rescue.”

During her Saturday launch at the Band Stand across from Elmore Stout High School, Ms. Hodge-Smith rallied the Fourth District with nostalgia for what she described as better days.

“We have come a long way down from the days when scholarships were more accessible to our children; … the roads were good and the sewer system worked; … when our politicians were gentlemen and they put people’s interest before self,” she said.

Additionally, she promised to assist seniors by boosting transportation, activities and insurance options. To develop the economy, she added, she would re-establish the Main Street Business Association.

Preserving Main Street as a historic street is also among her goals, as is improving government transparency, she said.

Vincent Wheatley launched his campaign on Sunday on Virgin Gorda, decrying the “state of disrepair” of the territory.

In order to “dig ourselves out of this hole, it’s going to take a different kind of leadership,” he said.

His objective: transformation. Mr. Wheatley called for a movement to elect politicians well versed in local, regional and international politics.

“Wherever the occasion takes us, to make sure the BVI remains on the cutting edge,” he advised.

Mr. Wheatley emphasized the importance of allowing people to keep their lands in order to pass them on to future generations.

“One of the things we have to do and is a top priority: we have to establish those land committees once more. We have to free your land up,” he said. “I can’t say that I have all the answers, but I do know that working together, we will sort it out.”

He also proposed setting up a special development fund for the Ninth District with contributions from government, businesses and landowners.