As Russia continues to attack Ukraine in an escalating war overseas, the Virgin Islands has braced for economic and other impacts here in the Caribbean. “We don’t control the world’s …

END_OF_DOCUMENT_TOKEN_TO_BE_REPLACED 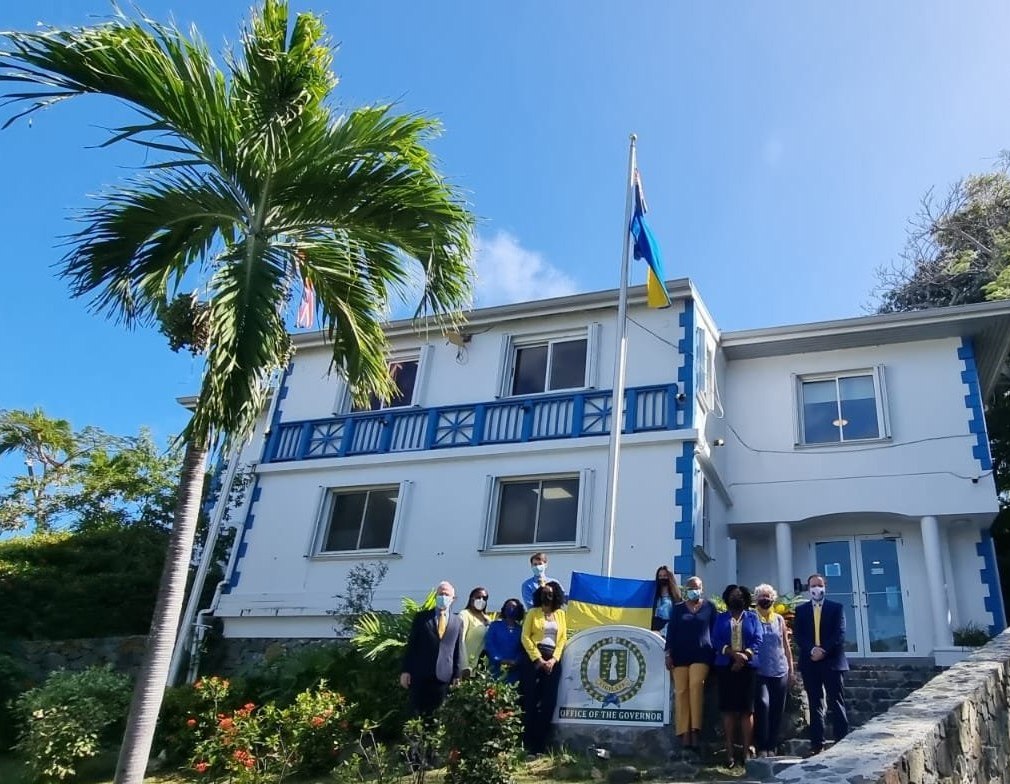 Staff at the Governor’s Office wear blue and yellow while raising the Ukrainian flag on Monday in solidarity with the country, which is being invaded by Russia. (Photo: GOVERNOR’S OFFICE)

As Russia continues to attack Ukraine in an escalating war overseas, the Virgin Islands has braced for economic and other impacts here in the Caribbean.

“We don’t control the world’s economy.That’s why we went green; that’s why we’re going green,” Premier Andrew Fahie said during a press conference on Friday. “Even if your prices increase in Ukraine because of the war in Ukraine, it does not increase the cost of the sun that comes from heaven, which is free.”

Mr. Fahie said the BVI Tourist Board had scheduled meetings with partners in Europe to assess the current conflict, and he noted that the crisis will affect oil prices and electricity bills in the territory.

Forbes magazine reported on dent Caribbean may also face challenges to food security due to the war at a time when the region is already reeling from the financial impacts of Covid-19, supply chain disruptions, price hikes in oil and goods, rising shipping costs, and the limited availability of vessels.

In a statement on Monday, the Premier’s Office echoed those warnings.

“In addition to our concern that this conflict will cause and increase human suffering, we are also mindful that there are economic impacts — which are already showing and which will get worse — as well as social implications which will ripple around the world,” the statement noted. “Coming on the heels of the August floods and hurricanes of 2017 and more recently Covid-19, the possibility of war makes it important for us to be prepared for any disruptions that can be felt here.”

The office also urged residents to be mindful of the impacts the overseas conflict will have on international travel, trade and commerce.

Additionally, the office stressed the need to increase the territory’s economic resilience by investing in sustainable energy and food security.

One of the territory’s two main economic pillars — financial services — may also feel a pinch during the turmoil be- tween Ukraine and Russia.

“Sanctions issued by the [United Kingdom] against Rus- sia apply in the Virgin Islands in the same form and rigour as in the UK itself,” the Premier’s Office stated. “As such, participants in our financial services sector are being kept abreast of these sanctions and all updates to the consolidated list of sanctioned persons and entities.”

The office stated that the territory will cooperate with overseas law enforcement to share beneficial ownership information within one hour of requests.

“Should it become necessary for any further measures to be taken to protect the local economy and the social well-being of our people, Virgin Islanders and residents can be assured that the government of the Virgin Islands will be prompt and decisive in our actions,” the office stated.

In a show of solidarity on Monday, the Governor’s Office flew the Ukrainian flag, and its staff dressed in blue and yellow.

The office urged residents to “stand united in condemning the Russian government’s reprehensible actions,” which it called a “fundamental violation of inter- national law and the United Nations charter.”

Governor John Rankin noted that the UK imposed its largest and most severe sanctions against Russia.

“Those sanctions will also be applied in the [ VI], cutting off access by Putin and the Russian banks to international finances,” he said. “In addition, all aircraft owned, operated, or chartered by a person connected with Russia or registered in Russia is banned from flying in the air space of the Virgin Islands.”