No COVID-19 cases had been confirmed in the territory as of yesterday afternoon, but at least 22 people were under quarantine and the government announced plans on Tuesday to close …

END_OF_DOCUMENT_TOKEN_TO_BE_REPLACED 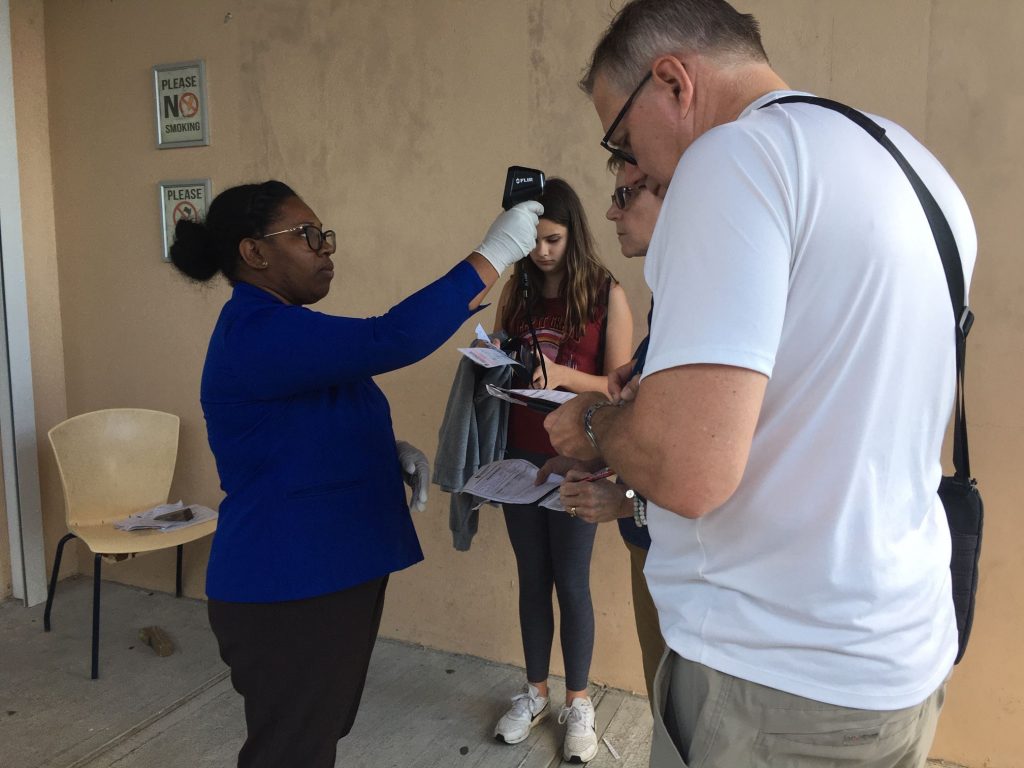 A health official takes the temperature of arriving passengers on Monday at the Road Town ferry terminal. Govern- ment said such screening procedures are in place at all open ports of entry. (Photo: CLAIRE SHEFCHIK)

No COVID-19 cases had been confirmed in the territory as of yesterday afternoon, but at least 22 people were under quarantine and the government announced plans on Tuesday to close schools for two weeks, turn away tourists, and limit public gatherings to 30 people, among other preventive measures.

During a Tuesday evening press conference, Premier Andrew Fahie said more than 15 people had tested negative for the virus over the past seven days, and he promised to provide updates during weekly press conferences and on the government’s website.

He also provided details about the government’s new response measures.

Entry into the territory by sea or air is prohibited to foreigners who are not nationals, belongers, residents, work permit holders, or their depend- ents, he explained, adding that exceptions include flight crews, diplomats, and crew aboard freight and cargo vessels.

All public and private schools, as well as extracurricular activities “are mandated to close” for 14 days, he added.

Meanwhile, for 30 days all social gatherings — including weddings, funerals, sports activities, cultural events, recreational events and commercial events — should be limited to a maximum of 30 people at a time, or ten people who fall within vulnerable categories such as seniors, according to the premier.

Visits to Her Majesty’s Prison and to residential homes like the Rainbow Children’s Home and the Adina Donovan Home for the Elderly are prohibited, he said.

“Minimising movement helps significantly in preventing the spreading of the coronavirus,” he said.

Mr. Fahie added that officials met with supermarkets and shipping companies, and reported that most of them are set up with a “six-month supply.”

While he acknowledged that “some preventative measures will create inconvenience,” he added, “It is always better to be safe than to be sorry.”

Also during the press conference, Deputy Premier Carvin Malone, who is also the minister of health and social development, explained that the new measures were taken by Cabinet in accordance with the Public Health Ordinance, the Quarantine Act, and the Infectious Diseases Notification Act. These laws will also be used for enforcement, he explained.

The territory’s new measures are similar to steps taken throughout the world in recent weeks, but such prohibitions have proven to restrict businesses and affect employment. On Tuesday, however, officials did not outline any comprehensive government programme to help struggling businesses or individuals who are out of work, and attempts to contact officials at the Social Security Board were not successful.

The premier said that 15 people were tested for the virus over the past week, and all those tests came back negative. He added that more tests have been conducted since then, but when asked how many he directed the question to Mr. Malone, who did not provide the total number.

Though the territory is able to test for the virus and get preliminary results within hours, it must continue to send those results to the Caribbean Public Health Agency’s laboratory in Trinidad for confirmation, Mr. Malone explained.

Mr. Malone added that 22 people are in quarantine.

“The Health Services Authority is preparing isolation areas, we are preparing quarantine areas, and we are preparing all that is required at the ports of entry so that our frontline personnel, our office staffing, are protected at all times,” he said.

Asked what would happen in case someone falls gravely ill and needs overseas medical care, Mr. Malone said the territory needs to be mindful that there may be difficulties in turning to neighbouring countries or territories for help at a time when the outbreak is affecting most of the world.

Currently, he said in response to another question, the Dr. Orlando Smith Hospital has six ventilators that could provide mechanical ventilation to critically ill coronavirus patients, and officials are “looking at isolation wards instead of quarantine spaces.”

Mr. Fahie added, “We do not have all the answers. This is uncharted waters. Whatever is humanly possible to do, we are doing it.”

On Monday, the Beacon asked the public to send their questions about the COVID-19 response via Facebook, and more than a dozen people complied.

The Beacon was unable to ask all of those questions on Tuesday — the press conference came to a close after about an hour and ten minutes — but Mr. Fahie encouraged media to fax, email, or phone in any questions that were not answered.

Attempts to answer the questions yesterday, however, were not immediately successful.

Mr. Malone also assured the public that answers to all questions would be posted to www.bvi.gov.vg/covid-19.

Asked about increased border security, Mr. Fahie did not disclose specifics but assured residents that the subject has not been not overlooked.

“We can’t give up full details of the border security, but they are there. It will be ramping up more,” he said. “In terms of beefing up those numbers, those plans are in place.”

Deputy Chief Environmental Officer Henrietta Alexander told the Beacon in a Facebook post that passengers at all ports of entry are being temperature checked.

Mr. Fahie posted photos on his Facebook page showing officials at the ports taking temperature scans of those entering the territory.

In a meeting with ferry operators on March 11, health officials also gave the operators and employees health and travel advisory forms for all passengers to fill. Ferry operators handed these forms out along with customs forms before passengers boarded ferries, according to a Beacon reporter who travelled into the territory Monday aboard a ferry from St. Thomas (see page one).

Officials also asked that captains fill out forms declaring any passengers who might be showing virus symptoms on each trip. That information, officials said, would have to reach the ports before the ferries dock.

Meanwhile, the BVI Airports Authority has erected a tent at the Terrance B. Lettsome International Airport in order to isolate passengers suspected of having COVID-19, the agency announced yesterday on Facebook.

On Friday, Cabinet decided to issue a moratorium blocking all cruise ships from entering the territory for 30 days starting the next day.

Government decided to postpone the BVI Spring Regatta, which was scheduled for March 30 to April 5, and the Virgin Gorda Easter Festival, which would have been held April 11-13.

A taskforce was created for the next six months to monitor the situation and present solutions to “remain ahead of the curve,” the premier added.

The premier asked for the support of the United Kingdom to supply a ship for the purpose of quarantining people in the event that the territory needs to do so. He also asked for support in setting up temporary quarantine facilities on land if needed.

On Monday, Governor Gus Jaspert issued a statement about the ongoing response, citing many of the actions decided by government on Friday.

A quarantine advisory was issued on March 11, and an update to that advisory was published on Friday. It stated that passengers and crew who have travelled to, from, or through a “special interest” country in the last 14 days will be quarantined upon arrival in the territory. These countries include China, Italy, Iran, South Korea, France, Spain, and Germany.

Anyone who has travelled to, through, or from high-risk countries or has been in close contact with a suspected or confirmed case of the virus, may be subject to quarantine for up to 14 days even if they don’t exhibit symptoms of the virus. High-risk countries listed are the US, Switzerland, United Kingdom, and Norway.

On Saturday, officials met with taxi drivers who operate tours at the cruise pier along with vendors at Tortola Pier Park and Crafts Alive to discuss the impact of the virus in the territory. Similarly, officials led a BVI Chamber of Commerce and Hotel Association meeting last Thursday night where hospitality stakeholders expressed their concerns and asked questions about the virus and preparedness.

As of yesterday, there had been 216,074 reported cases of coronavirus and 8,892 fatalities globally. The number of cases is dropping in China, where the virus originated, but continues to grow in other countries.