A week before the border reopening, more details on the official entry protocols were announced and the online portal for applying to enter the Virgin Islands went live. But businesses …

END_OF_DOCUMENT_TOKEN_TO_BE_REPLACED 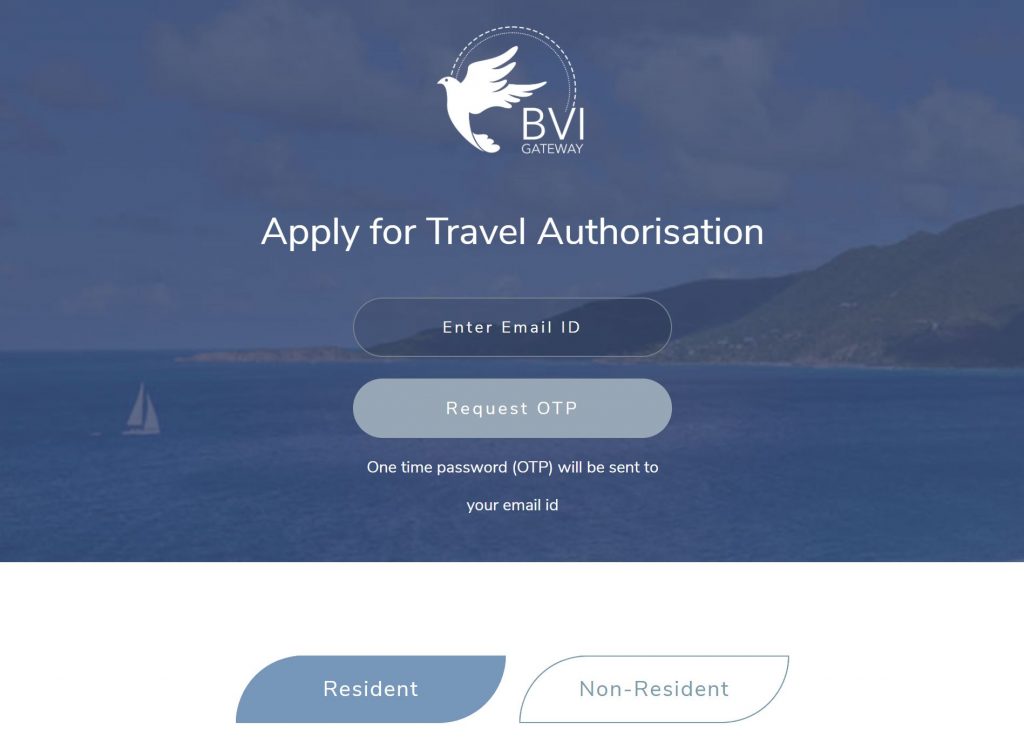 The online portal where travellers to the Virgin Islands must register before booking their travel arrangements went live Monday evening after being promised since Nov. 2. Visitors and returning residents can access the portal at www.bvigateway.bviaa.com. (Screenshot: BVI GATEWAY)

A week before the border reopening, more details on the official entry protocols were announced and the online portal for applying to enter the Virgin Islands went live. But businesses are still looking for some answers regarding where visitors can go and how government will support various industries moving forward.

On a different website than was previously announced, the online “BVI Traveller’s Authorisation Portal” launched Monday evening at www.bvigateway.bviaa.com, delayed from the anticipated Nov. 2 launch.

Business owners, particularly those in the hospitality industry, have been eagerly awaiting the publication of these protocols so they can better market to visitors coming to the territory.

Andrew Ball, BVI Marine Association chairman and an ad hoc member of the government’s Economic Advisory Council, said compared to the 60 percent occupancy rates some businesses had been reporting prior to the announcement last month that protocols would be stricter than many stakeholders expected, rates have fallen substantially to about three to five percent occupancy for next month in the marine industry, which is expected to play a major part in the reopening.

Now businesses in that industry and others are figuring out how best to move forward.

All travellers to the VI, including children, must get a “BVI Gateway travel authorisation certificate” through the online portal before visiting the territory.

Applications must be completed 48 hours prior to travelling, BVI Reopening Steering Committee Chairwoman Felice Swapp said in a Nov. 19 video about the portal. The travel certificates are valid for five days.

The application includes forms for health, immigration and customs, as well as information about quarantine accommodations and Covid-19 test results.

A big question from the reopening announcement last month was if visitors would be able to quarantine on boats, which stakeholders said they hoped would help in striking a balance of entertaining patrons during their lockdown while also supporting the marine industry. Recent information from the steering committee and elected leaders confirmed that they could.

Visitors also will be allowed to enter the VI through seaports after Dec. 8.

“A Covid-19 negative PCR lab test result within five days of your arrival must be completed by a medical laboratory that has the appropriate certifications,” Ms. Swapp said.

Children younger than 5 don’t have to take a PCR test; children ages 5-10 can do a mouth swab.

People can go ahead with making their travel arrangements after the certification is finalised, Ms. Swapp said. And they should carry a print or electronic copy, as well as a confirmed negative Covid-19 PCR test and any typically necessary travel documents.

“This certificate streamlines the process at the airport and … seaport and removes the need to fill out paper forms,” she said.

Answering some frequently asked questions in a video on Friday, Ms. Swapp clarified that everyone, including Virgin Islanders and residents, must follow the travel protocols.

That means taking a Covid19 test when they arrive on “day zero” and then completing a further four full days of quarantine. On the morning of their fifth day — their fourth full day in quarantine — travellers will take another Covid-19 test, and if it comes back negative on the sixth day of travel, they will be free to move about the territory.

People will find out where to take their test once they make an appointment, Ms. Swapp said.

“The introduction of ‘day zero’ seemed to come out of nowhere, which was a bit of a surprise,” Mr. Ball said. “It turned four days effectively into five, and you don’t get your test results until the next day.”

When visitors can’t move about until the sixth day of a trip, that makes it very difficult to market typical week-long vacations, he said. Mr. Ball added that government’s decision to abandon earlier plans to allow tourists restricted movement on days five through eight in favour of just the “four-day” quarantine doesn’t effectively make much of a difference given the new quarantine protocols.

Travellers must also install the BVI Gateway App on their phones “for health monitoring, medical health request[s], [and] geo-fencing for quarantine support and contact tracing,” according to a published set of travel protocols.

Travellers also must pay a $175 entry fee, which can be done through the online portal as well. This covers the cost of airport and seaport fees, PCR tests on days zero and four, the GPS-tracking app, and any monitoring devices that might be required. It does not include the cost of the Covid-19 test needed prior to booking a flight.

Anyone seeking to quarantine at a private house must contact the Environmental Health Division at 468-5110. Though travellers can request a certain facility, the Ministry of Health and Social Development makes all final decisions, according to government.

The long-awaited protocols have been published, but government offered a reminder that they’re not set in stone.

“Persons are reminded of the fact that the Covid-19 dynamics are constantly changing,” the BVI Tourist Board noted upon publishing the travel protocols on Monday. “Protocols are therefore subject to change given the epidemiological environment.”

Mr. Ball said he appreciated what the steering committee is doing to help communicate with the maritime industry regarding the opening. But he said he still hopes for better collaboration between marine industry stakeholders and government.

“We’re sitting here saying, ‘Well, we open in six days, and we don’t actually know what we can sell,’” Mr. Ball said.

One element still missing from the reopening plans as of Tuesday was a definitive list of locations where travellers could go while quarantined aboard a vessel. Mr. Ball said a proposed list was submitted to Cabinet but approval had not been received.

He also said stakeholders and officials still need to coordinate on some other key areas as well. For example, he expressed concern about the GPS tracking bracelets’ ability to withstand water. Without that function, some marine vessels can’t effectively plan bookings, he said.

To adapt to the protocol requirements that don’t permit free movement until day six, Mr. Ball said some companies are pitching new packages to potential visitors, offering a 10-day stay for the cost of a week. But he said it’s challenging for business owners to be testing out new models at this time.

Such challenges are exacerbated when trying to compete with other Caribbean countries that already have such kinks worked out. He added that he didn’t have much hope for December and January bookings.

Mr. Ball also said it’s important to understand that the industry anticipates most travellers will be people who own boats and only have a limited amount of time to use the vessels annually, not tourists looking to book crewed charter trips.

“They have reservations, and we expect probably up to 50 percent of them to cancel,” he said. “They have reservations because nobody else is going to use that time anyway. They’re not losing revenue by saving the time. So they’ve got their boat on hold, and the company will get it ready for them if they come. But I think most of them are sort of waiting to see if there are any changes, and then they’ll throw in the towel when there’s not, unfortunately.”

Other questions could also affect bookings, particularly the dearth of information about what exact Covid-19 insurance packages are required for visitors, and the pending return of VI crew stuck outside the territory, Mr. Ball said.

Still, he hoped that a lot will be learned in the coming weeks that will inform future policy. He acknowledged the difficulty of navigating the pandemic and importance of finding a balance in supporting the economy while minimising the spread of the virus. Making the launch as successful as possible really will “take a village,” he said, and it will be up to community members to support as many failsafe measures as they can.

“A lot of this is about proving that it can be done safely,” Mr. Ball said of the reopening. “We have two months before February in which we can hopefully show that … with this approach, not enough people are coming; there’s not enough people to reach critical mass where the businesses on the out islands can function and pay their staff and put food on the table. But we also have in that two months a way of stress testing everything, seeing how we can improve upon it, and building confidence with the government that this can be done properly.”

To gain a better understanding of how industries are coping with the pandemic, the BVI Chamber of Commerce and Hotel Association is circulating a confidential survey to business owners.

The chamber hopes to learn more about how the current reopening protocols are affecting the business community and get suggestions for how they could be modified to make them work better.

BVICCHA Administrative Assistant Shelly Richardson said figures promised by government about unemployment haven’t yet been published, but the chamber needs to understand what concerns businesses have in order to address them now.

The deadline to respond is 11 a.m. Nov. 28. The 2012 Business Outlook Survey is available under the “Advocacy” tab on the chamber’s website at www.bviccha.org.

The chamber will share the survey results during a community meeting at 5:30 p.m. next Wednesday. It will be broadcast live via the BVICCHA page on Facebook. Email info@bviccha.org for more information.

Also of importance is having a full economic recovery plan from government to guide the long-term rebuilding of the territory, Ms. Richardson said.

“In the report, we would love to see some diversification in regards to the different industries … and how they will be promoted as well,” Ms. Richardson said. “Because we understand that finance and tourism are our top two sectors in the BVI. But we would love to see how the other industries can be promoted to help, especially in times like this, when we see that tourism is down. It would be nice if we had the other industries to kind of uplift the economy.”

She added that the chamber would be happy to offer input on the plan based on concerns and ideas it has heard from the business community.

Governor Gus Jaspert tweeted on Tuesday that United Kingdom Prime Minister Boris Johnson had this week confirmed the UK’s commitment to purchasing enough doses of a Covid-19 vaccine for the UK and its overseas territories.

“Any use of vaccines is a voluntary choice and is a matter for [the VI government] to decide how it is offered to the community,” Mr. Jaspert added.

The University of Oxford announced that it worked with the firm AstraZeneca to develop a vaccine offering a “high level of protection” from Covid-19. The university aims to supply three billion doses next year.