With a red-tailed boa constrictor wrapped tightly around his arm and the snake’s head safely in his hand, William Coles explained to a group of frightened and fascinated viewers what …

END_OF_DOCUMENT_TOKEN_TO_BE_REPLACED 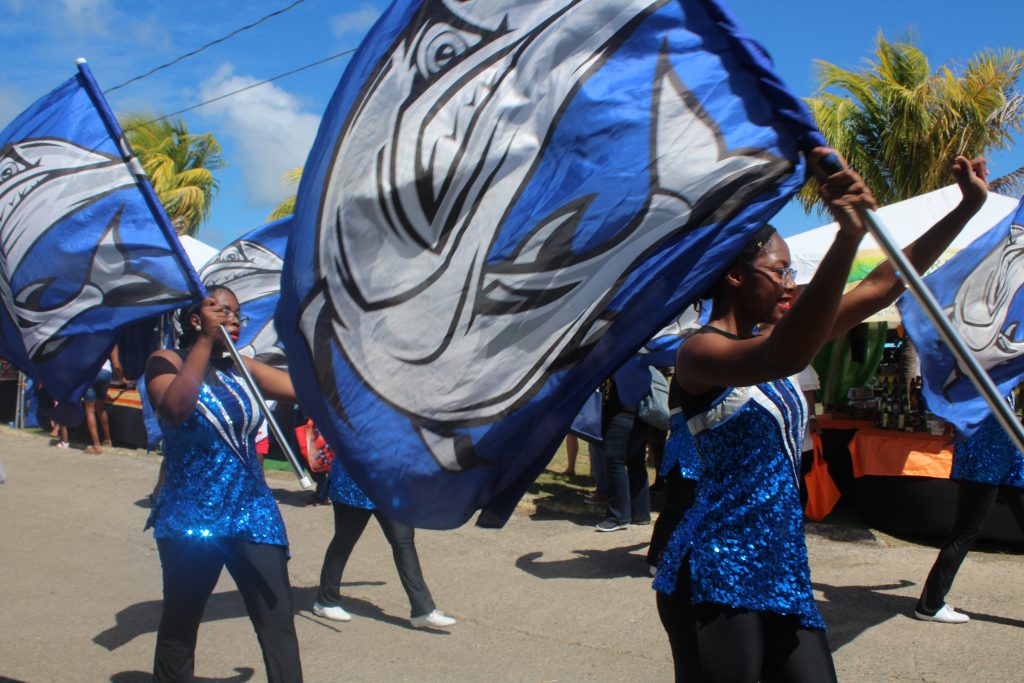 With a red-tailed boa constrictor wrapped tightly around his arm and the snake’s head safely in his hand, William Coles explained to a group of frightened and fascinated viewers what to watch out for if they come across the creature.

“You see the rows of teeth? That’s what you need to be careful of,” said Mr. Coles, who works for the United States Virgin Islands Department of Planning and Natural Resources.

Since 2012, more than 50 invasive red-tailed boas have been caught on St. Croix, each ranging in size from 13 inches to 14 feet long.

Educating attendees of the 49th St. Croix Agricultural Fair was an important part of the three-day fair that welcomed thousands of guests from all over the Caribbean, and networking was the main goal for farmers from this territory.

The VI government chartered a ferry from Tortola to take as many as 100 farmers to the festival on Saturday.

“I thought of it being good because we wanted to engage the farmers back into farming, and where’s a better place to do it than the St.Croix’s Farmers Week?” said Deputy Speaker of the House Neville Smith (R-at large), who took the journey in place of Education, Culture, Youth Affairs, Fisheries and Agriculture Minister Dr. Natalio Wheatley, who was attending a funeral in his district. “We tried to get as many farmers across and engage so they could network.”

From Feb. 15-17, the agriculture fair hosted local and international farmers, vendors, musicians and more. Farmers and members of media from the VI boarded the Sea Express II ferry at 8 a.m., reaching St. Croix at 11 a.m. after stopping in Red Hook, St. Thomas. By noon, the passengers reached the festival grounds on the west side of the island.

Visitors first encountered a food pavilion where fresh cakes, pastries and local foods were sold. Just behind the pavilion, a stage was set up with live music performances, and booths selling local foods surrounded it. Nearby, carnival games and rides were set up.

At the entrance of the festival grounds was a bridge leading into a walkway with food booths set up along both sides.

Here, various foods were for sale, including vegan lasagna and fresh drinks.Tricia Taylor sold vegetarian and vegan food including coconut curry tofu and pea balls made from split peas.

With ancestral roots in Tortola, Ms.Taylor is from St.Thomas but has lived in St. Croix for six years and participated in the agricultural fair for two years.

“I have two booths,”she said.“I have the refreshment booth and I also sell natural soap, natural toothpaste, Maasai jewellery that I order directly from Ghana.”

The food and products she sells directly reflect her spiritual and religious beliefs, she explained.

“Rastafari is a livity and we believe in holistic healing and wholesome living, eating and drinking natural and from the land,” she explained.

With a flag honouring former Ethiopian Emperor Haile Selassie I at the back of her booth and donned in ankh earrings, Ms. Taylor served drinks and food all day. Visitors enjoyed the fare in a courtyard of yellow benches and under the shade of mango trees.

Though rain came and went, deterring some people from participating in the fair, she said, a good crowd was still expected to come.

Farther down the line of food booths were vendors who sold natural products, clothing, books, artwork, leather shoes and more. A second stage of live music was set up behind the booths, and the Educational Complex Barracudas Marching Band performed throughout the pathways while dressed in blue and white.

At the heart of the festival grounds were the S&D Animal Feeds Animal Pavilion and the Rosa Tree Farmers Market pavilions, buzzing with activity and excitement. Birds, turtles, hamsters, fish, turkeys and cows were on display or for sale under the animal pavilion, where Mr. Coles held his daily boa shows.

“We always encourage the community to come out and buy from the farmers,” said Marthious Clavier, director of exhibits for the University of the Virgin Islands. “They are selling a wonderful variety of fruits and vegetables. We have our off-island exhibitors who are here from places like Guyana, St. Lucia, St. Kitts, Antigua and Barbuda, and they have goods that they brought also.”

Watermelon, sugarcane, sorrel, eggplant, avocado, turnips, parsnips, potatoes, cucumbers, pineapple, coconuts, squash, and kohlrabi were just a few of the fruits and vegetables found in the pavilion. Along with flycatchers and lemongrass plants, visitors also found cacti and succulents for sale.

“The farmers make their money here,” Mr.Clavier explained. “That’s a big part of why we do this: to highlight the farmers just for a couple days. … They make that connection and that person may have, hopefully, a customer for life.”

Making connections to potential lifelong customers isn’t the only benefit farmers found at the fair. Learning new techniques and networking with other farmers were also crucial, Mr. Clavier explained.

This year’s festival was held under the theme “Trendy in 2020,” and it focused on innovation. The UVI tent showcased homes for pollinators in the form of hollowed wood. Another section of the tent demonstrated how to raise chickens in a backyard.

Ideas for the VI

Mr. Smith, the House speaker, said the festival gave him good ideas for the VI, and that he hopes to see Farmers Week return to the territory soon.

“I think we should contact all the farmers now…. Let’s also invite farmers from St. Croix and St. Thomas to share their experience and their wealth of knowledge,” he said. “Let’s network.”

Though the territory typically hosts a farmers’ market every other Saturday in Road Town, it hasn’t hosted a government-backed Farmers Week since 2016.

“For a long time, farming has been on the backburner. I think it’s very important because if you realise what happened after Hurricane Irma, we were all without food for a while,” Mr. Smith said. “I think it’s important that we at least be able to feed ourselves. Even if we can’t export, we should farm enough where we could feed ourselves.”

Mr. Clavier echoed the importance of farming, saying,“Without farming, we know none of us would exist, because food is life. We have to eat it to survive.”