When Jamel Davies was a child, he watched his uncle build a Virgin Islands sloop. He didn’t know he would be restoring the same boat 20 years later, eager to …

END_OF_DOCUMENT_TOKEN_TO_BE_REPLACED 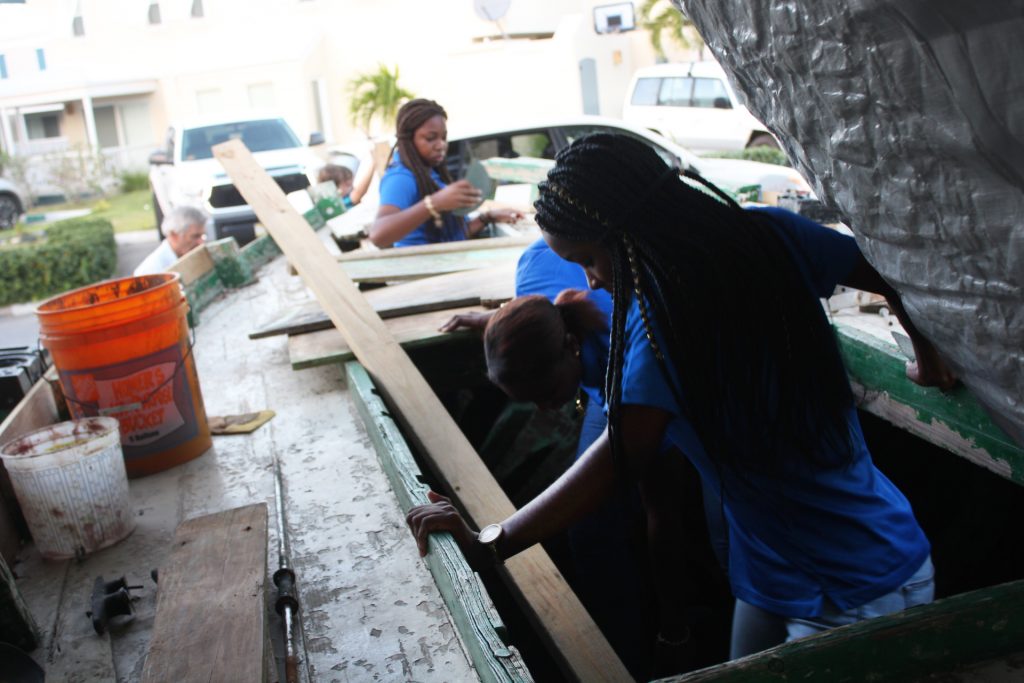 When Jamel Davies was a child, he watched his uncle build a Virgin Islands sloop. He didn’t know he would be restoring the same boat 20 years later, eager to have it back on the water again.

“It’s like catching up with your past,” he said, adding that when he’s working on the boat now, “Sometimes it feels like [he’s] back there.”

Mr. Davies is helping preserve the boat, named The Youth Instructor, as chairman of the Virgin Islands Sloop Foundation, a non-profit organisation that launched last Thursday night in Nanny Cay.

The foundation welcomed members to join the cause during a BBQ. For $20 a person, attendees enjoyed a plate of rice, beans, corn, ribs and chicken while supporting the renovation of historical boats.

The organisation’s four sloops—which sustained various levels of damage during Hurricane Irma —are being restored with the help of three young women apprentices who are learning an old trade.

Chemoia Hodge, 21, Tenisha Roberts, 20, and Norissa De Leon, 19, are all Virgin Islanders who go to college and work at a zipline company, but they also spend a lot of their time woodworking on the boats. They took electrical and woodworking courses through the Youth Employment Programme after Irma, but they learned the most about the boats from Geoff Brooks, who nurtured the boats for many years as the curator of the VI Maritime Museum.

“It’s kind of different,” Ms. De Leon said of the fact that all three apprentices are female. “It kind of shows that anybody could do it.”

Mr. Davies said restoring the boats is akin to “bringing back the days of old.”

“These were the main way of transportation in the BVI before we had cars,” he added. “Eventually these are relics of the past. Modernisation is taking place with new techniques and new materials.”

The frames are made out of local timber, including sea grape trees from Anegada and the poke-me-boy, a tree known only in the VI that is scientifically known as Acacia anegadensis. Manufactured yellow pine is also being used to restore the boats.

Each workday, the three apprentices get their materials together, learn from Mr. Brooks, who spearheaded the programme, and start working on the boats.

“I can’t sit in an office and work,” Ms. Hodge said. Ms. De Leon agreed, adding, “It is a more free-spirited environment and easier to learn.”

But Mr. Davies, who has sailing in his blood, is most excited about getting the sloops out on the water.

“Sailing is the fun part: This is the hard part,” he told the apprentices. “The reward is after you done go through a major feat building boats—and go through the hardships and toiling—and after you’re done to see it launch, to see your work in the water, to see the results of your work.”

But the young women said they will be happy enough to watch the sailing from shore. None of them can swim.

Ms. De Leon felt similarly. “I think it’ll be much more better if we build it and let someone else enjoy it,” she joked.

Ms. Roberts agreed, “Based on my fear of drowning, I think that will be better.”

Asked what the foundation needs the most right now, Mr. Davies said “awareness.” Anyone can walk through the foundation’s “shop,” set up near the beach bar in Nanny Cay. Matt Holt, an attendee at the BBQ and member of VI Search and Rescue, was amazed by the setup of the project site.

“I love the workshop,” he said. “It’s exactly what a sloop shop should be: fairy lights covered by a sail under the shade of a sea grape tree.”

Governor Gus Jaspert attended the event as well, though he didn’t make an address. The event drew about 75 participants, 16 of whom became new members. Membership is $100 a year for anyone interested in supporting the cause. The foundation is aiming to get the sloops up and running by the Great Festival Sloop Shootout and Heritage Regatta in Nanny Cay in August.