Arliene Penn credits a pap smear screening in 2001 with saving her life by detecting her cervical cancer before it progressed to an advanced stage. Now she is using her …

END_OF_DOCUMENT_TOKEN_TO_BE_REPLACED 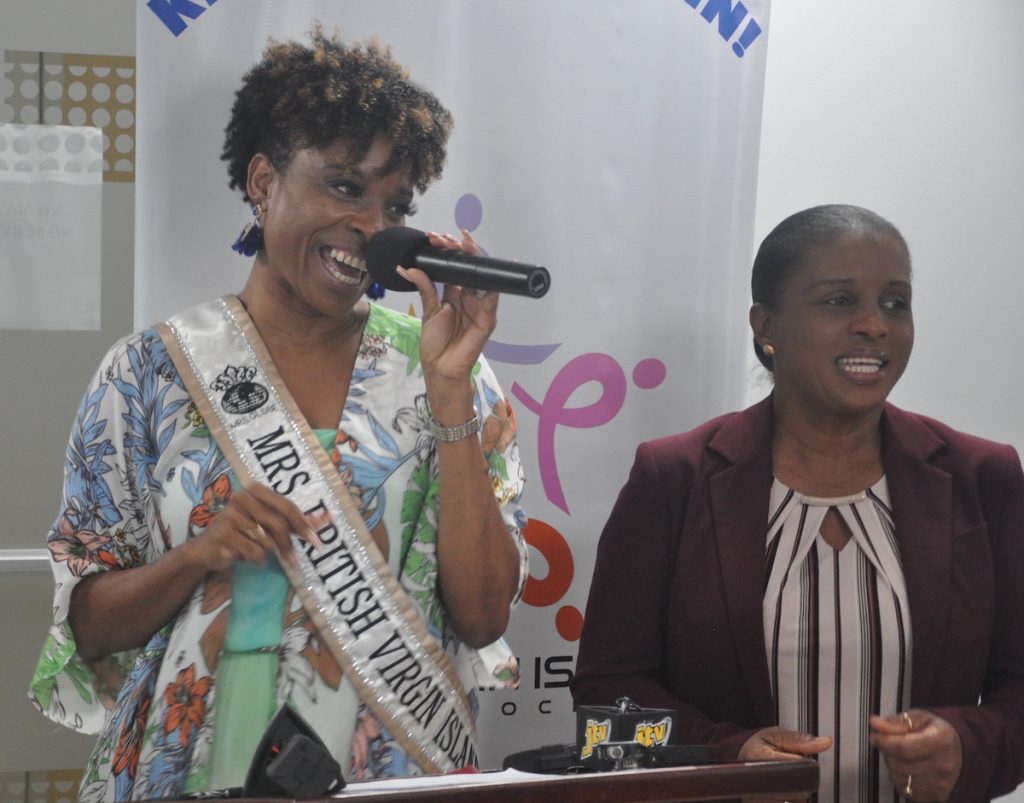 Mrs. Globe BVI Arliene Penn sings during the launch of a programme offering free pap smear tests during the first half of December. (Photo: FREEMAN ROGERS)

Arliene Penn credits a pap smear screening in 2001 with saving her life by detecting her cervical cancer before it progressed to an advanced stage.

Now she is using her platform as Mrs. Globe BVI to encourage other women to get the same test.

To make it easy, the government communications director has partnered with two non-profit organisations — the BVI Cancer Society and Women in Need BVI — to offer free pap smears next month at Eureka Medical Clinic.

“I’m an 18-year cervical cancer survivor, and I firmly believe that early detection saves lives, because it saved my life,” Ms. Penn said during a press conference on Nov. 17 at BVI Finance.

Cancer Society President Gloria Fahie, who accepted the first donation during the press conference, stressed the importance of regular pap smears and other forms of preventive healthcare.

“Most persons, I would say, are in denial, and they don’t want to take care of their health, and even if they come across any kind of symptoms they just push it aside until it’s too late and it’s like stage three or stage four, when it’s almost impossible to cure,” she said, adding, “Even if you’re not showing symptoms, you need to get yourselves checked.”

As of Nov. 17, more than 100 women had already registered for the screenings, according to Win BVI Director Alicia Green.

If too many women sign up to be covered by Ms. Penn’s donation, Ms. Fahie said the Cancer Society will ensure that they all receive the test for free.

She also credited Ms. Penn with helping to convince the Cancer Society to rebrand and broaden its traditional focus on breast cancer awareness to also include other types of the disease in women and men alike.

“Mrs. British Virgin Islands Globe is a firecracker,” said Ms. Fahie, who is a breast cancer survivor. “I have never experienced such a firecracker. … I believe what she has been saying all along: that we have been paying too much attention to breast cancer.”

Ms. Penn said she is now preparing to represent the territory at the Mrs. Globe 2023 International Pageant in Hong Kong in April.

She ended the press conference by performing a song titled “Reclaiming Me.”

Registration is open through Nov. 30 for the free screening at Eureka Medical Clinic.

The screenings, which include a free consultation with a doctor, will be held from Dec. 1-15.

The test is recommended for women ages 21-65 who are sexually active and have not been screened in the past three years. To register call 440-4122.