Though the annual Emancipation Service could not be held in person due to Covid-19 precautions, viewers who tuned in to a virtual version of the event last week still got …

END_OF_DOCUMENT_TOKEN_TO_BE_REPLACED 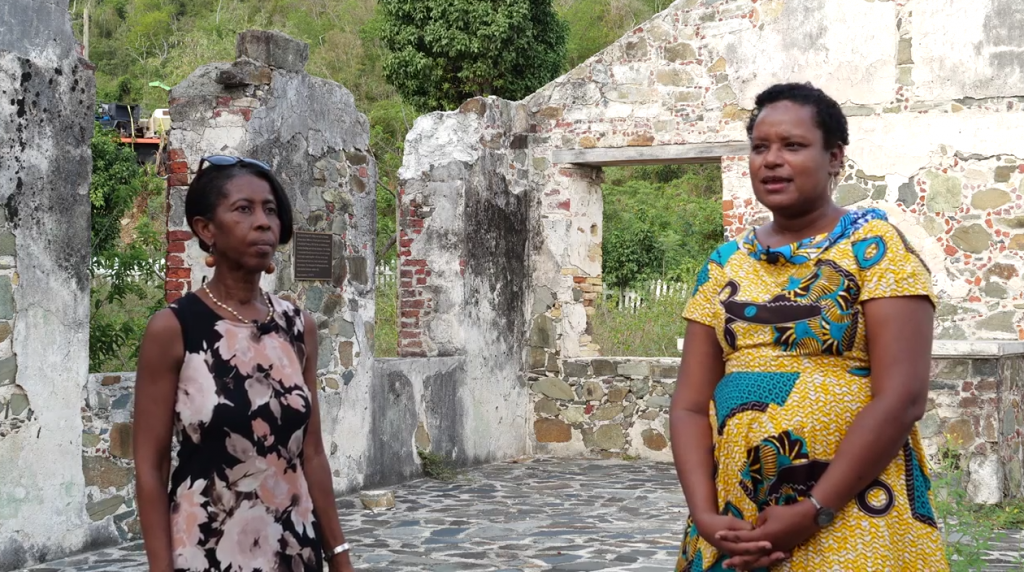 Though the annual Emancipation Service could not be held in person due to Covid-19 precautions, viewers who tuned in to a virtual version of the event last week still got a close look at the people and places that played key roles in the territory’s emancipation journey, beginning with some of the earliest communities of freed slaves in North America.

The women led viewers on a virtual tour of the free village of Long Look, which dates back to 1776 when Nottingham Estate’s Quaker owners bequeathed the land to 25 formerly enslaved people, creating one of the oldest known free black communities in the West.

The hosts said these Long Look residents helped begin the territory’s journey toward prosperity and self-determination as they began farming and trading with nearby territories.

“This started the ball rolling for them,” Ms. Louis said. “It made them independent long before the other enslaved persons became free, and they were not just landowners. They became entrepreneurs.”

Many of the territory’s leaders, both past and present, were descendants of those 25 original Nottingham landowners, she added.

Next the hosts paid a visit to St. Philip’s Anglican Church in Kingstown, which was founded by free Africans who entered the territory in 1814 after they were found on four Spanish slave ships known as the Candelaria, the Venus, the Acevedo and the Emmanuela after the United Kingdom had abolished the slave trade in 1807.

Dr. Quincy Lettsome spoke about how the August Emancipation Festival had evolved over the decades, starting with the first organised Festival in 1953, which he said looked very different from today’s raucous festivities.

Among simpler events like beach picnics and dances, it featured a competition to catch a greased pig, he recalled.

“They would let that pig go and it would run and run and if you’d hold it, it would slip through your hand,” he said. “Eventually somebody would catch the pig and that pig would be theirs.”

In his remarks during the virtual service, Premier Andrew Fahie said that although 186 years have passed since emancipation, that did not mean that oppression had come to an end in the VI.

He pointed out that for years after being freed, ex-slaves were still exploited by their employers due to an “apprenticeship” programme that they had to fight to abolish, and noted that “there has been no formal apology” from the United Kingdom.

“There has been no meaningful expression of remorse by those who institutionalise the inhumanity towards our ancestors,” he said, adding, “While we do not hold any animosity, we all must agree that there must be reciprocity.”

Education, Culture, Youth Affairs, Fisheries and Agriculture Minister Dr. Natalio “Sowande” Wheatley explained the reasoning behind the theme of the 2020 Festival — “Be fully free, emancipate yourself from mental slavery” — which he said was especially meaningful as the territory ponders its destiny in light of this year’s constitutional review.

“Too many of our people believe that in the Virgin Islands we cannot be successful if we are not ruled by the United Kingdom, the nation which enslaved us,” he said. “They are still very uncomfortable with the concept of us ruling our own destiny. This is because for many years, we have been taught that black leaders are incompetent and corrupt. I am here to tell you that we have prospered as people because of the courage, competence and compassion of our leaders.”

For his sermon, Dr. Melvin Turnbull, chairman of the Virgin Islands Heritage Month Committee, read from the book of Daniel, concerning three Hebrew boys’ escape from the fiery furnace into which they were thrown after refusing to compromise their morals.

“What a solid unwavering stubborn faith is needed to withstand all the temptations and trials,” he said. “You ask our forefathers. They have been through it all. This sweat. They bled, then died … and that’s why we have the freedom that we have today. For this reason, the Lord encourages us to place our faith in him, so that we can stand.”