A virtual twist for Festival 2020

The 66th August Emancipation Festival was unlike any other before it. Rather than packing into the Festival Village to dance to soca and calypso, residents logged onto the Virgin Islands …

END_OF_DOCUMENT_TOKEN_TO_BE_REPLACED 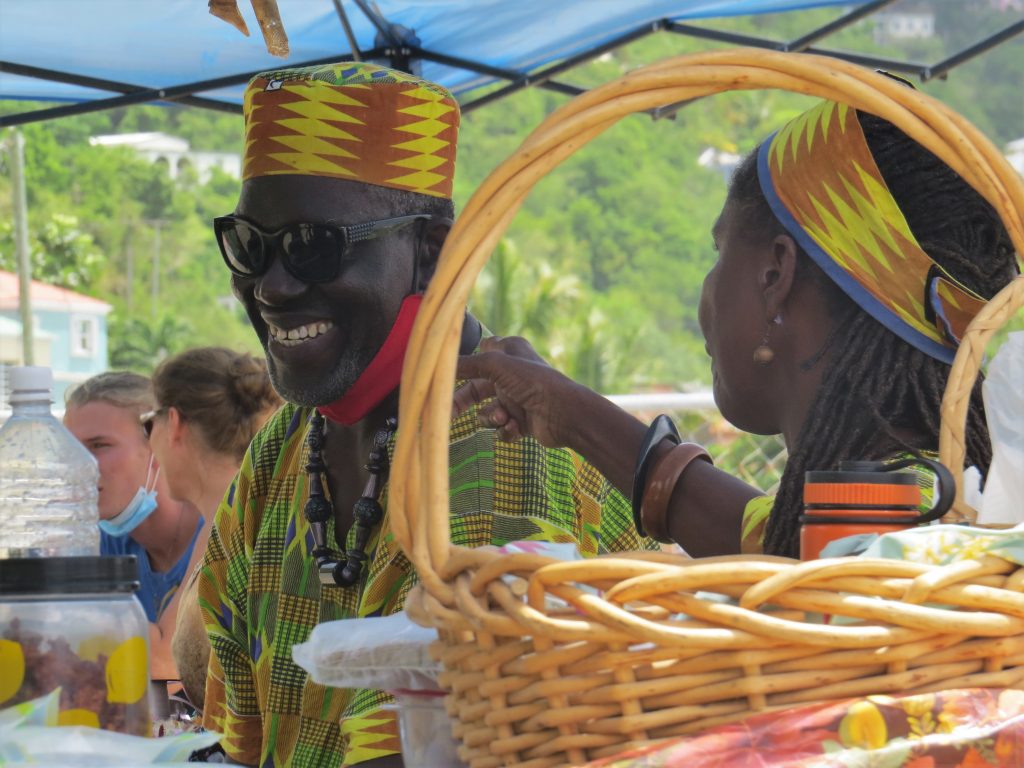 For the second year in a row during the August Emancipation Festival season, farmers and artisans set up shop in Carrot Bay for the village’s farmers market, a day full of food, fun, and games. The event was one of the few held in-person this year: Several others were held virtually due to the Covid-19 pandemic. (Photo: DANA KAMPA)

The 66th August Emancipation Festival was unlike any other before it.

Rather than packing into the Festival Village to dance to soca and calypso, residents logged onto the Virgin Islands Festival Facebook page to attend virtual ceremonies and to sing along as VI musicians’ tunes were streamed live.

With the threat of Covid-19 still looming over the territory, the celebration this year was scaled down, with mainstays like the parade and Rise and Shine Tramp nixed from the calendar, while more subdued outdoor events and virtual ones took their place.

Some residents complained that this arrangement undercut the spirit of the celebration, but Festivals and Fairs Committee Acting Chairman Khalid Frett said he appreciated the change of pace, explaining that the toned-down partying allowed the territory’s culture to shine.

“It played out very well,” he said, adding, “We were able to focus a lot more on our culture and heritage.”

The Festival kicked off with a poetry slam on July 31 because the virtual opening ceremony scheduled to precede the event was pushed to Aug. 1 following technical difficulties.

Mr. Frett said the switch worked well, explaining that the poets’ performances prodded residents to consider the legacy of emancipation from many angles.

Though poets were competing for cash prizes, the mood was jubilant and friendly, with host April Glasgow cracking jokes and smiles when welcoming participants to the stage.

Sticking to the theme of emancipation, some of the poets recounted festivals past, while others spoke to the ongoing efforts to seek justice for the modern-day oppression of black people.

At the end of the night, Via Donovan-Hodge took first place, Teia Edwards second and Kamal Lettsome third.

After an unannounced rescheduling — which officials blamed on challenges with broadcasting the video — the opening ceremony was streamed online on Aug. 1, and it was viewed by more 5,000 people.

Beginning with a message from Education, Culture, Youth Affairs, Fisheries and Agriculture Minister Dr. Natalio “Sowande” Wheatley, the video then broached the topic of emancipation through a different art form: dance.

As a man started to recount his family’s journey from slavery to freedom, the video faded into a nighttime dance sequence, in which a group of women dressed in black pants and grey shirts performed in front of a fire, moving in unison to the soundtrack layered with the man’s story of emancipation.

The following week, despite the absence of a bustling Festival Village lined with bars serving cold drinks and hot food, the online musical showcases drew plenty of eyes, with almost 8,000 people tuning in to the Kings and Queens of Calypso Review on Aug. 4, some 17,000 people tuning in to the Soca Showcase on Aug. 3, and about 18,000 watching the Gospel Explosion on Aug. 2.

The comment sections of these virtual parties were lively, with viewers cheering on the performers and saluting the organisers for ensuring that the show went on, even if not in person.

Beneath the soca showcase video, one commenter wrote, “I almost decided not to tune in but glad I did … this dude Pascal is very lively & entertaining. All the guys are awesome #!GoodShow!”

Another added, “Feel like I’m right in the village, but I’m right here at St. Thomas.”

One of the unexpected upsides to the virtual programming was that it made the festivities accessible to Virgin Islanders living abroad and attracted older residents who may not have felt comfortable in the midst of the village, Mr. Frett said.

Another positive, he added, was that the format highlighted the talent not only of the territory’s entertainers but also those who work behind the scenes to host the entertainment.

Though there was at least one technological mishap, with the virtual opening ceremony unexpectedly pushed back, Mr. Frett said he was grateful that the territory’s telecom companies pulled through and provided the necessary bandwidth, and impressed by all the organisers and workers who ensured smooth programming.

Festival activities, however, were not only relegated to Facebook broadcasts.

Musicians and speakers held court at the The Stickett in Long Look for the Festival of Culture and Praise that lasted throughout the day on Aug. 5, playing gospel and prayer music and celebrating the area’s important role in the story of VI emancipation.

When it was his turn at the microphone, Dr. Wheatley, who draws his lineage directly from the enslaved people who were freed in 1776 at Nottingham Estate, said that in reflecting on the struggle of his ancestors, he feels confident that the territory can rise above the challenges it currently faces.

But to do so, the community must cast aside division and seeking unity instead, he said.

“Our ancestors have been through a lot,” Dr. Wheatley said, noting the brutality of slavery as well as the economic hardship that followed emancipation.

“We have to get rid of all the backbiting. … and the tearing each other down, and the VIP and the NDP and the high class and the low class and all the different types of division we have here in this community. And we have to truly come together if we want to do like our ancestors did and make it through these tough times and tough challenges.”

Outdoor celebrations continued on Friday at the Cyril B. Romney Tortola Pier Park during a food fair that was post-poned from the previous week following the passage of Tropical Storm Isaias.

Attendees roamed around from vendor to vendor feasting on local favourites as well as dishes that are becoming harder to find.

Alongside her sister, Amy Gordon sold drinks and baked goods, including rare treats like one she called poya bread, a mound of cornmeal that tastes as though it is tinged with honey.

There was plenty of savoury food as well, as people waited in long queues for stalls such as Jenny’s Kitchen, where deep metal pots held bright-orange pumpkin soup flecked with pepper, and cooks lathered a rich brown sauce on top of plates of oxtail and rice.

For entertainment, a troupe of moko jumbies danced in the grassy lawn in front of Beans coffee shop.

After debuting during last year’s Festival celebration, the Carrot Bay farmers market on Saturday — which also was postponed from the previous week following Isaias — again welcomed residents to the seaside fairgrounds on Aug. 8.

Early in the morning, vendors laid out tables stacked with goodies like freshly peeled sugarcane, homemade tarts and corn hot off the grill.

Though attendance wasn’t as high as last year, vendors took the time to chat and reminisce about a time when agriculture used to be a larger part of life in the VI.

The afternoon brought a series of competitive games, starting with the lime races.

Standing six feet apart per social distancing guidelines, entrants shuffled to the finish line as quickly as they could while balancing a lime on a spoon.

Smiles spread as the fruit went flying, with Dr. Wheatley joining in on the fun.

The VI’s youth shone in the first round of bucket races, for which they had to rush to fill their buckets with almonds and then carry them across the finish line.

The activities concluded with a speed mango-eating competition as the winner finished six mangos in minutes.

In the view of Dr. Nikki Rubaine, who owns Smiles Dental Spa in Road Town, the circumstances that necessitated a quieter festival may have helped preserve some aspects of the territory’s culture.

Dr. Rubaine took her children to the food fair to track down some of her favourite treats, like gooseberry and tamarind stew, which she worries might eventually disappear as lifelong bakers get older, she said.

But with so much time on her hands during the quarantine, Dr. Rubaine, like many others, learned how to cook some of those traditional dishes she’s grown up loving.

“I myself learned how to …master my Johnnycakes,” she said.

Others, however, were less positive about this year’s celebration.

On Monday, Romain Minott said he did not feel any Festival spirit this year and did not participate in any of the organised events.

Shoba Ram, who was sitting under the shade of a nearby tree in Noel Lloyd Positive Action Movement Park, said she also felt this year’s celebration was lacklustre, though she agreed that it was better to sacrifice a more exciting Festival to safe-guard the community against the virus. “It’s not bad that they didn’t do it because it’s just for the people’s health and safety,” she said. “So we all understand.”