Boaters in North Sound, Virgin Gorda on Sunday morning might have been shocked to see two bright green mermaid tails flapping in the water. But the two apparent sirens were …

END_OF_DOCUMENT_TOKEN_TO_BE_REPLACED 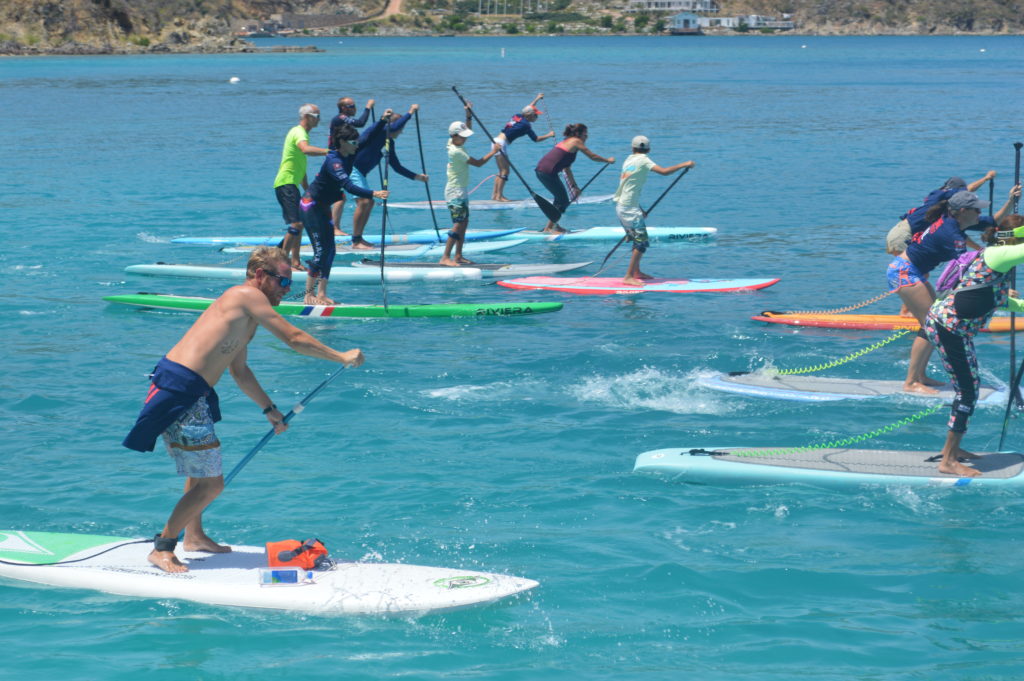 Above, swimmers in the two-mile race head away from the dock at Bitter End yacht Club. Below, stand-up paddleboarders take off from the dock for the two- mile race to Leverick Bay. (Photo: CLAIRE SHEFCHIK)

Boaters in North Sound, Virgin Gorda on Sunday morning might have been shocked to see two bright green mermaid tails flapping in the water.

But the two apparent sirens were just Mark Sanders of TMM Yacht Charters and Elizabeth Killeen of Carey Olsen, a law firm sponsoring the seventh annual Swim and SUP the Sound fundraiser for Virgin Islands Search and Rescue.

The pair were among the residents who competed in the one-mile or the two-mile swim race between Bitter End Yacht Club and Leverick Bay Resort. Another was VISAR’s patron, Governor Gus Jaspert, who finished third in the one-mile swim.

Alongside them were the stand-up paddleboarders, who raced two miles along a slightly different route.

“Last year we had people swim it in full VISAR kit,” VISAR Operations Manager Julie Schneider said as she laughed at the mermaids. “I can’t wait to see what they do next year.”

She added that she was delighted with the turnout — which included more than 50 racers — and the amount of money raised, which she declined to disclose. Post-Hurricane Irma, organisers had kept their expectations low.

“Honestly, we weren’t sure how many people were still on island,” she said. “When we pitched it to the sponsors, we were honest. We didn’t know how many people we were going to have sign up. We just wanted to make it a fun community day.”

Organisers were worried about logistical challenges resulting from having to transport attendees on boats from Leverick Bay to Bitter End and back again.

“Last year and every year before, the start has always been at Saba [Rock],” she explained. “Registration was there. They had time to set up their SUPs, and it was a little bit smoother.”

This year, Bitter End, which remains closed due to the damage it sustained during the hurricane, was the only place that was usable, despite its limited space.

“That was a little bit confusing, but we’ve done worse,” Ms. Schneider said. “Since Irma, this was easy. It was really good to have the Bitter End, considering the state of the island.”

VISAR is a nonprofit rescue organisation that relies on volunteers and does not charge for its services, and its other major annual fundraiser, the Governor’s Gourmet Gathering, was cancelled due to Irma.

“This is our only fundraiser this year,” Ms. Schneider said.

A smooth start led to some choppy conditions as racers reached the middle of the sound. By afternoon, Shane Donovan had emerged victorious among the two-mile swimmers and Elizabeth Besom among the one-milers. Saskie Laing finished first among the paddleboarders.

Ms. Laing called the event “a really fun race” that became more difficult near the middle when the wind suddenly picked up.

“I fell off my board three times,” she said. “I was not expecting that.”

She was full of praise for her fellow competitors, all of whom “paddled really hard,” she said.

Afterward, racers convened at Leverick to enjoy barbecue, beer, beach games and a tug-of-war featuring Team VISAR against “everybody else.”

The governor said after the race that he was asked about a month ago to become a VISAR patron.

He joked that the request made him think twice about what he’d signed up for.

However, he added, “Today made me realise what an amazing organisation VISAR is. You probably don’t think of it often until you really need it.”

‘Crucial to the BVI’

Charlotte Caulfield — the managing director of KRyS Global, which has sponsored the event for the past six years — attended with her family.

“Everything that VISAR does is crucial to the BVI, because we’re such a boating community,” she said. “All of us in the firm, we all go out on boats; they’re there for us.”

As she sat on the beach watching the finishers, she praised the community support. “It feels like normal, and that’s the nicest thing I can say about it,” she said of the event. “It feels like getting back to normal.”