Local News > VISAR gets influx of new trainees after Irma

VISAR gets influx of new trainees after Irma

“VISAR, VISAR, this is the captain of Lucy and Grace,” Nelson Boothe crackled over a VHF radio from the deck of a catamaran. “There’s a woman on the boat who …

END_OF_DOCUMENT_TOKEN_TO_BE_REPLACED 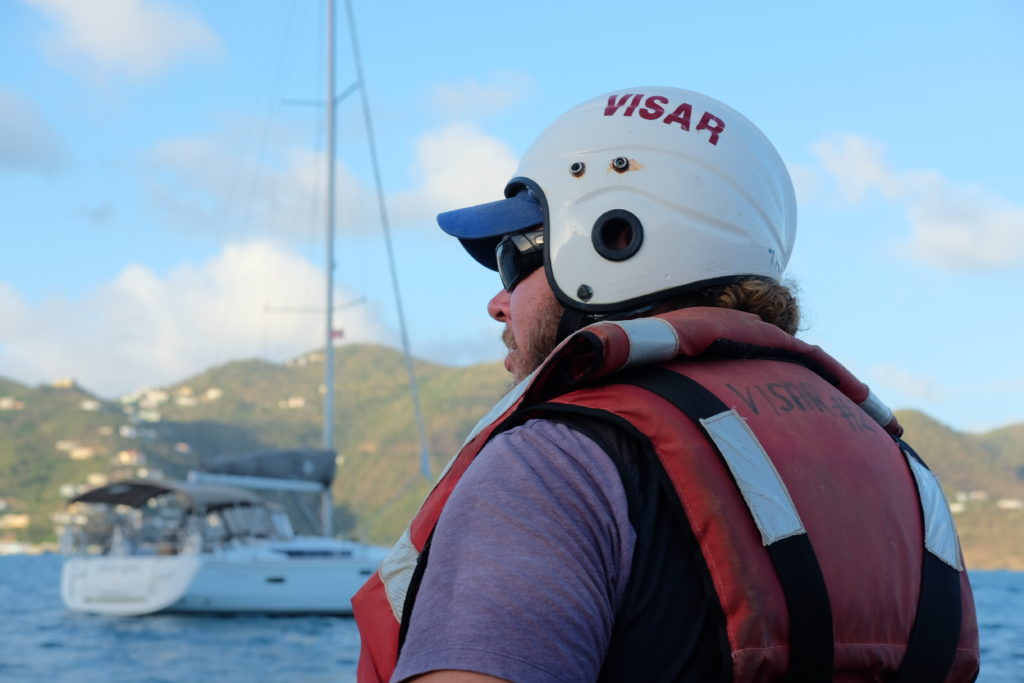 The number of active VISAR trainees has grown to 10 this year. One of them, Nelson Booth, said he joined after seeing the rescue group assisting others after Hurricane Irma. (Photo: AMANDA ULRICH)

“VISAR, VISAR, this is the captain of Lucy and Grace,” Nelson Boothe crackled over a VHF radio from the deck of a catamaran.

“There’s a woman on the boat who fell and hit her head; we’re not sure what’s wrong but she’s laying on the floor. We need assistance.”

Within a matter of minutes, the unmistakable orange VISAR boat was tethered to the larger vessel, hands hoisting over a first aid kit, “trauma” kit and spine board covered with a series of multi-coloured straps (more officially called the Kendrick Extrication Device).

For the record, there was never any injured woman – at least not this time.

The training session was one of many that VISAR, or Virgin Islands Search and Rescue, conducts over the course of the year to teach budding members how to respond in emergency medical and rescue situations.

There’s a lot to learn.

To become crewmembers, trainees must become certified in Emergency First Response, a basic course that encompasses first aid and CPR. The rest of their education involves practicing sceneries that test that knowledge and more, like diving under the VISAR boat in “full kit” (helmet, life jacket and jumpsuit) and mapping out an array of search patterns.

Depending on previous marine or medical experience, each new member completes their training in about six to eight months. A certain number of members also go on to be trained as advanced medics.

But lately there’s been no shortage of recruits eager to take the plunge. Since Irma, the number of active trainees has swelled to ten. Previously, VISAR normally got about one or two a month.

“These trainees are definitely not the fly-bys,” said Gerard Kraakman, president of the board of directors.

“We have people who are serious about VISAR after Irma. The new trainees are all serious, we have a good crew right now.”

Before last year’s hurricanes, he owned and managed the company Barecat Charters and would give visitors the standard “two-minute spiel” about VISAR, he said. Recently, he decided to join the rescue group himself.

“It was that all the sudden I wasn’t working seven days a week, and I had time for it. I saw that right after the storm, VISAR had the means and mobility to go out and help people that I didn’t have.”

Though the number of trainees has gone up, the amount of calls VISAR has received over the past few months has dropped.

Sergio Dantas, a representative for the Tortola crew, said there have only been four “shouts,” or calls VISAR responds to, between Tortola and Virgin Gorda in 2018.

He estimated that, typically, there would be about 30.

“What happened since Irma, I believe, is that most of the sailors coming back are more experienced, it’s not their first time sailing and they’re not here for the first time. But we’ve still had missing persons, people that fell down,” he said.

Irma has posed some unprecedented obstacles for the group, however.

When the beacon meets enough water pressure, it’s automatically activated and sends a distress signal to the nearest rescue coordination centre – in this case, VISAR.

But the vast majority of these recent alerts are false alarms.

EPIRBs have been going off on storm-damaged boats that finally floated to the surface in marinas or are being crushed by an excavator, for example.

Mr. Dantas said the group has been lucky that sometimes other organisations, like salvage companies, can confirm if there’s a legitimate emergency before VISAR crew has to investigate.

That lesson of uncertainty applies to all VISAR calls; in other words, it’s not always evident what crew members will find on shouts.

“We are never 100 percent sure what we have,” Mr. Dantas said. “I went out one day for a severed finger, and it was actually a child with a problem with their foot.

“Sometimes people are nervous and they give you the wrong information, or they judge something is way worse, or way easier to handle, than it is.”

Back at VISAR’s base in Road Reef Marina, things are returning to normal, if not becoming more polished.

Granted, a large boat is still half-submerged directly in front of the mouth of the boathouse, causing navigational problems for the VISAR boat every time it has to leave on a call.

But Mr. Dantas said the vessel is expected to be moved very soon – the group is merely waiting for the boat’s owners to sign off on its removal.

Despite significant damage to the headquarters’ roof, offices and siding, VISAR has remained active since the storm.

A brand new VISAR boat is also coming soon to the boathouse, he said, and necessary repairs will be made to the building.

Save for a $5,000 yearly grant from the Department of Disaster Management, VISAR relies completely on “donations of money and time,” Marketing Director Kate Mullan said.

“One of our concerns several months down the line from Irma was [that] we do have operating costs,” Ms. Mullan said, adding that charter boat visitors would typically donate $2 each to VISAR.

For its only fundraising event of the season, the group is hosting “Swim & SUP the Sound” on May 6, where event-goers can either compete or spend a day at the beach.

Donations of time are also strongly encouraged – and have, in turn, given many VISAR crew members a bigger sense of purpose, Ms. Mullan said.

“People want to feel like they’re a part of something,” she said.