Virgin Islands Search and Rescue has faced a year of challenges, but on Monday night the brand-new, custom–built Parker 1,000 Baltic rescue boat Spirit of Tortola served as a symbol …

END_OF_DOCUMENT_TOKEN_TO_BE_REPLACED 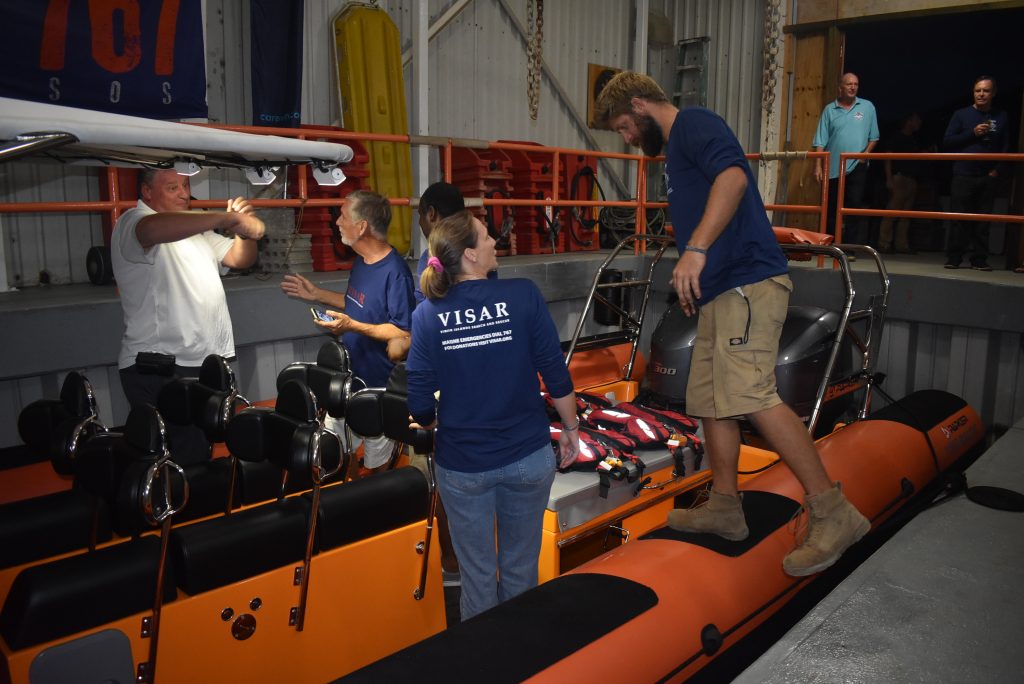 Crew members get a look at the features on the new VISAR rescue boat during its official blessing ceremony on Monday. (PHOTO: CLAIRE SHEFCHIK)

Virgin Islands Search and Rescue has faced a year of challenges, but on Monday night the brand-new, custom–built Parker 1,000 Baltic rescue boat Spirit of Tortola served as a symbol of an organisation that’s ready to concentrate on doing what it does best: save lives at sea.

The boat was officially “blessed” by Governor Gus Jaspert at a ceremony at the newly-refurbished Elisabeth Ann Harris Base Station in Road Reef.

Board member Mark Sanders, who led the two-year process to design, build and fundraise enough to purchase the boat, said the Spirit of Tortola is “bigger, better and faster” that its predecessors.

The boat will officially go into service two weeks from now, after crewmembers have been properly trained in all of its advanced features. Among those, Mr. Sanders explained, are thermal imaging for combing murky seabeds, and rear-facing camera so that medics can effectively communicate with the helm.

“In this way we can give the casualty the best care by making sure that we can stay faced in the right direction,” he said, explaining that crewmembers previously had to shout back and forth to each other to coordinate.

“If the medics can’t do their job, we can’t do our job.” Shock absorbers will give the crew a smoother ride, and the deck space has been expanded.

“One of our concerns has always been, what if we have a mass casualty situation?” Mr. Sanders said. “And this gives us enough room to deal with one properly.”

As recently as April, part of the base’s roof was still torn off, the interior was damaged, and a large partially-sunken boat was blocking access to the water — all lingering reminders of Hurricane Irma.

Now the roof has been fixed, the path to the water is clear, and most of the base’s interior has been freshly refurbished and repainted. “As we all know, this has been a very long year in the rebuild process for the BVI, and we are happy to have our base almost back up to normal,” VISAR President Gerard Kraakman said in his remarks, adding that the new boat is not the only thing the organisation has to celebrate. “We have a number of new crewmembers who’ve worked extremely hard this past year.”

This week, 15 members celebrated completing their Advanced Adventure Medic training, an intensive course led by Canadian EMT Dave Watt of Rocky Mountain Adventure Medicine, in which they were challenged to cope with unexpected medical scenarios using limited equipment and resources.

Mentoring others With the launch of the new vessel, the total number of VISAR boats will remain at two, with the other based on Virgin Gorda. The Spirit of Tortola is replacing an older boat that will likely be sold to St. John Rescue. Mr. Sanders said the two organisations plan to train together and share knowledge.

“It’s a good startup boat for St. John,” he said, noting that one of the aims of VISAR, which this year celebrates 30 years in operation, is to train and mentor other crews.

Mr. Kraakman also thanked Roger Harris, husband of the late Elisabeth Ann Harris, and the Joan Braithwaite Sailing Trust, who provided major donations toward the purchase of the boat, as well as the organisation’s main sponsor, law firm Carey Olsen.

Mr. Sanders pointed out that the old boat is still serviceable, but that the goal is to replace the organisation’s vessels every ten years in order to keep up with current technology.

“One of our goals is that we don’t stagnate; we don’t stay the same,” Mr. Sanders said. “We stay on top of our seamanship skills.”

He said that VISAR was modelled on the United Kingdom’s Royal National Lifeboat Institution, which was established in 1824.

Mr. Jaspert said the name of the new boat is apt, since it represents the spirit of community members coming together.