As the financial services industry faces existential threats from multiple directions, a recent report found good news for the Virgin Islands: The territory is among a small number of offshore …

END_OF_DOCUMENT_TOKEN_TO_BE_REPLACED 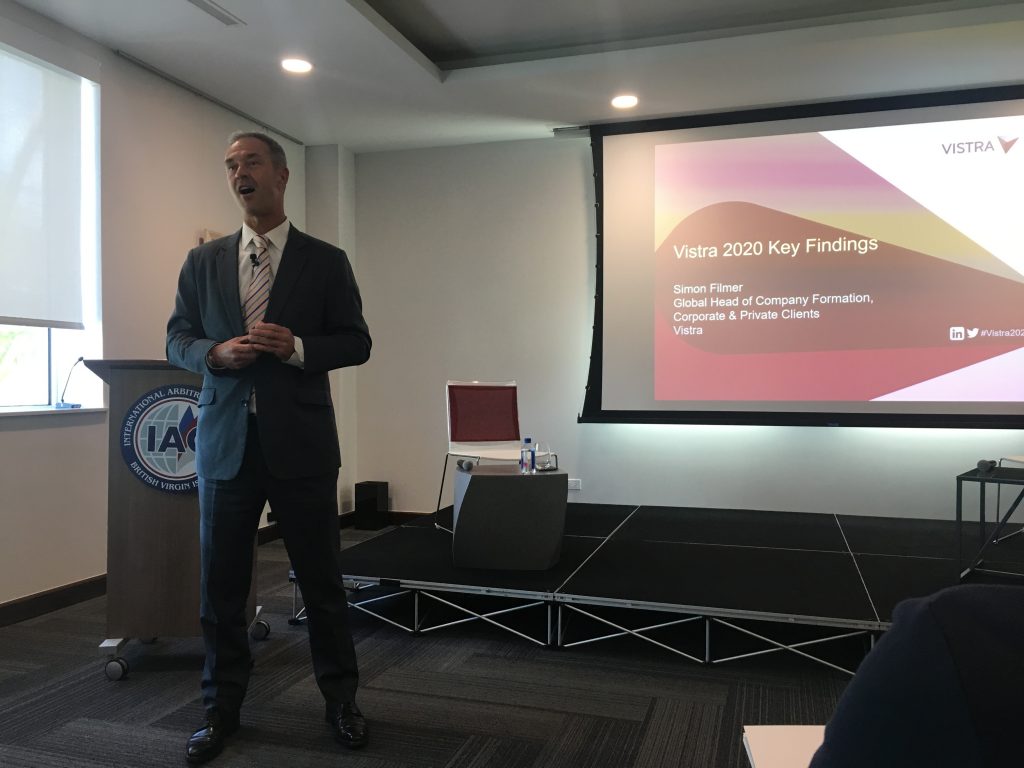 As the financial services industry faces existential threats from multiple directions, a recent report found good news for the Virgin Islands: The territory is among a small number of offshore jurisdictions that continue to thrive, at least in terms of global perception.

However, should the industry decline, the VI is also likely to suffer the most damage, ac- cording to the eighth annual Vistra 2020 report, titled “The disruption advantage: Opportunity in a changing world.”

In a survey of the perceived importance of 17 financial jurisdictions, the VI finished second to Hong Kong, up two-tenths of a point from last year. Cayman ranked sixth, and second among offshore jurisdictions.

During a May 8 presentation at the BVI International Arbitration Centre, Simon Filmer, Vistra’s deputy group managing director of corporate and private clients, added that the VI and Cayman have survived because they’ve have earned niche reputations: incorporations in VI’s case and fund structuring in Cayman.

The report explains, “The BVI is a good example of industry resilience and ‘anti-fragility’ in the face of hostile opinion. Following the Panama Papers in 2016 and the Paradise Papers in 2017, many could have expected the jurisdiction to fall in the rankings. Yet it remains at number two in our list.”

The results were culled from a survey of 800 financial professionals from firms around the globe, including 48 in the VI.

The report suggests that the VI has maintained its reputation even as increased global wariness of offshore businesses drives clients to onshore and midshore jurisdictions including the United States and United Kingdom, which surged in the rankings and now fall just below the VI.

However, Mr. Filmer added, “You think about this as trade routes, but from a BVI perspective: China, Hong Kong companies — where are they using? They’re using the BVI.”

According to the report, the VI and Cayman established trade routes for Asian businesses, which have seen more significant growth than businesses in other regions and “still have a relatively strong demand for offshore and are loyal to IFCs that provide consistently high service.”

However, the VI’s ongoing solid performance could mean that it has the most to lose in the face of tightening regulations.

Sixty-one percent of survey respondents said that the VI — more than any other jurisdiction — was likely to be negatively affected by increased regulation, and just 14 percent said the VI would be positively affected by regulations “while the US, and other onshore and mid-shore large financial centres, are expected to most benefit.”

However, the report pointed out that the VI, despite the odds, is currently experiencing growth in new incorporation volumes: 11.2 percent in the first nine months of 2018 over the previous year.

Much of that growth comes from China. Between January and August 2018 alone, Chinese firms invested in 4,309 businesses in 153 countries worldwide, and Chinese companies are responsible for more than 40 percent of the $1.5 trillion mediated through the VI, according to the South China Morning Post.

In Europe, the VI earned just 21 percent of the vote. One VI-based respondent called Europe a “dead zone” where even “marginal advantages get swept away.”

In fact, regulatory issues such as the EU economic substance requirements — which the VI enacted this year in an effort to stay off the blacklist — continue to spook VI professionals: 77 percent ranked the compliance process and new regulations the number one threat to the jurisdiction, compared to 73 percent worldwide.

However, Mr. Filmer, after eight years of reporting on the industry, pointed out, “All of these changes are absorbed into the industry; the industry actually becomes more resilient. There is disruption; bottom falls out; a sector of clients disappear. They’re not coming back, but the industry has been so far very resilient and continues to be strong.”