Volunteers clean up 8,828 feet of coastline

Volunteers across the territory joined in a belated observance of International Coastal Cleanup Day last weekend, clearing piles of waste from shorelines at Salt Island; Spring Bay on Virgin Gorda; …

END_OF_DOCUMENT_TOKEN_TO_BE_REPLACED 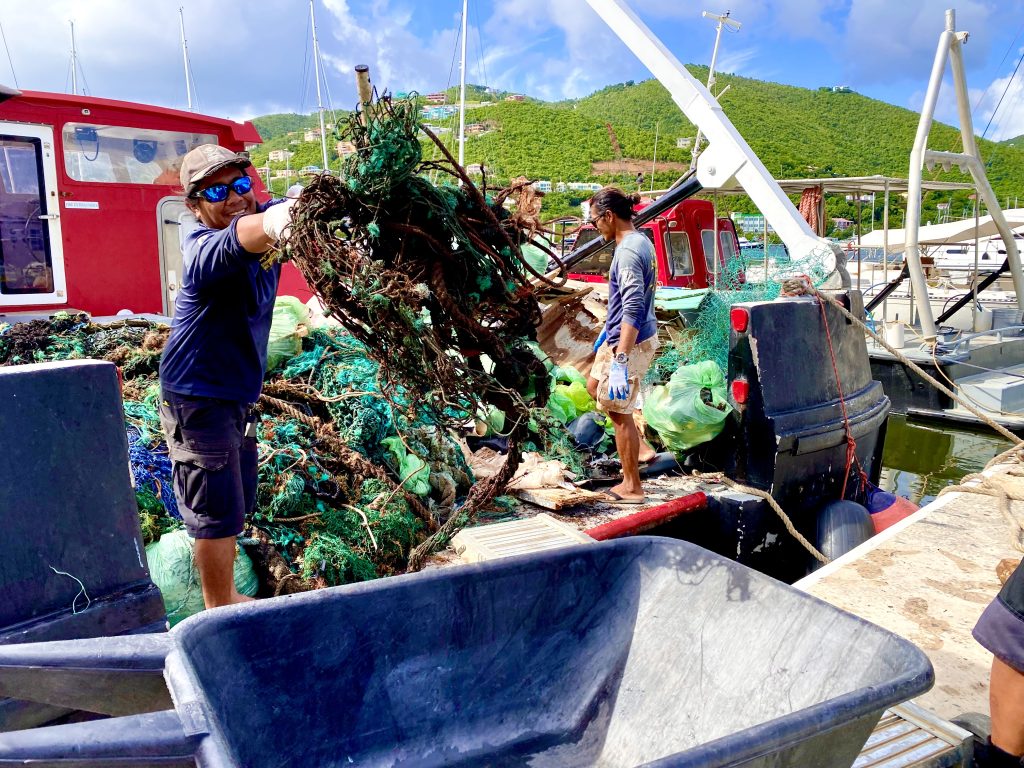 Team members from Beyond the Reef unload a barge full of litter collected from Salt Island beaches on Sept. 25 as part of a weekend-long, territory-wide coastal cleanup effort. (Photo: DANA KAMPA)

All told, 323 participants joined in cleanups at seven sites, covering 8,828 feet of coastline, according to Green VI Deputy Director Sarah Penney, who helped organise the effort.

International Coastal Cleanup Day began more than 35 years ago, and the VI’s annual effort began in 2007 through the then-Department of Conservation and Fisheries.

Since then, numerous organisations and individuals, today largely organised by Green VI, have pitched in for the massive effort to keep valuable ecosystems clean.

This year, the cleanup was initially scheduled for Sept. 17- 18, but it was delayed due to the passage of Tropical Storm Fiona.

As volunteers cleaned over the weekend, they documented the waste they collected with the app Clean Swell.

The app, created by Ocean Conservancy, allows volunteers to record data about their findings during cleanups and automatically generates a report with the cumulative results that can be shared globally.

On Salt Island on Sept. 25, some volunteers came early in the day to explore the island’s hills, and boats brought about 40 students later in the afternoon to help clear trash around the salt pond and the oceanside.

The adventurous youths navigated along rocky shores and below cliffs all while scanning for general trash, items in good enough condition to be recycled, and the “ghost” fishing gear that accounts for a large percentage of plastics found in the ocean.

Later in the afternoon, a few teams of adults ventured into the mangroves to cut free entangled fishing nets, an effort led by the VI-based non-profit organisation Beyond the Reef.

They crouched under the mangroves and slogged through ankle-deep sargassum while hacking away at lines and nets so entangled in the trees that they were nearly integrated into the coastline. Heaps of this trash were collected and transported out to a boat that carried it back to Village Cay.

Beyond the Reef organises beach cleanups in areas throughout the territory year-round.

On Sept. 24 at Spring Bay, Virgin Gorda, another group of more than 30 volunteers participated in the cleanup with support from the Rotaract Club of Virgin Gorda, the Leo’s Club, the Lions Club, and government backbencher Vincent Wheatley (R-D9).

“We promote a greener, cleaner, healthier BVI, and by being here today you are a part of this mission,” she said. “All recyclables collected today will be diverted from the dump. You are also helping to get rid of mosquito-breeding sites.”

Volunteers gathered into teams and searched the entire bay for several hours that morning, recording their findings as they went.

“This data significantly helps agencies tackle the pollution of coastlines and oceans both globally and locally,” Ms. Bellot said.

Last year, the VG cleanup took place along the coastline across from Pond Bay.

Anika Christopher contributed to this report.