Irma Anniversary > ‘Doing a little bit towards something big’

‘Doing a little bit towards something big’

Before volunteers started reconstructing Wonder Years Daycare & Preschool, there was essentially no upper floor left at all. “The roof was completely gone,” project manager Mitch Lederman said while giving …

END_OF_DOCUMENT_TOKEN_TO_BE_REPLACED 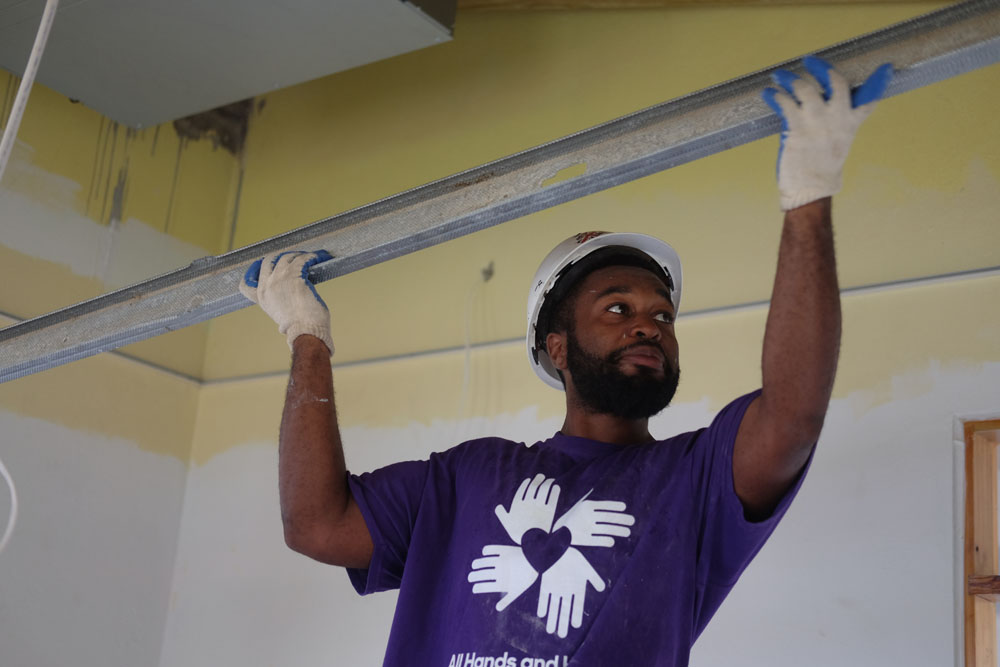 A volunteer with All Hands and Hearts helps to rebuild the Rainbow Children’s Home. (Photo: AMANDA ULRICH)

Before volunteers started reconstructing Wonder Years Daycare & Preschool, there was essentially no upper floor left at all.

“The roof was completely gone,” project manager Mitch Lederman said while giving an impromptu tour of the transformed space last month. “And this wall was so badly damaged it had to come down. We rebuilt the whole wall out there.”

The United States-based non-profit organisation All Hands and Hearts – Smart Response has spent roughly six months repairing the daycare — one of the many projects the group has taken on since Hurricane Irma.

While children learn and play downstairs, the volunteers have rebuilt the entire second floor above them.

AHAH is one of several local and international non-profit organisations that have continued to use volunteers to assist in the Virgin Islands’ recovery.

While AHAH has focused mainly on repairing educational facilities in the VI, others have taken on different roles. The BVI Red Cross, for instance, launched a financial assistance programme and continues to provide disaster training, among other functions; the United Kingdom branch of Team Rubicon is currently helping to rebuild the West End Community Centre; and Unite BVI has backed various programmes and projects across the territory, to name a few.

Sauda Smith, the executive director of Unite BVI, said the outpouring of generosity from around the community harkens back to a different time.

“I hear my mother-in-law say all the time this is what we used to be,” Ms. Smith said. “You know, we used to look out for our neighbours; we used to make sure that everybody had food to eat. People would come to stay with you if they didn’t have a place. She said that as terrible as this was, it shows this is who we really are.”

The Unite BVI Foundation — a non-profit whose operating costs are covered by Sir Richard Branson and its international arm, Virgin Unite — worked diligently in the local community before Irma, but the storm expanded its efforts.

In the aftermath of the disaster, Virgin Unite began collecting donations from around the world through the BVI Community Support Appeal, which the small Unite BVI team now manages.

There is about $2.1 million in committed funding to the territory in the fund, according to Unite BVI operations manager Kim Takeuchi.

“The Community Support Appeal fund was created in response to the overwhelming generosity of people coming forward and saying, ‘We want to help. What’s going on there? Please let us know,” she said. “This particular appeal fund received more hits and more circulation and more funding in a short amount of time than any other project they’ve ever done in the history of Virgin Unite.”

In the past year, the foundation has backed 35 different local projects that fall under the general themes of community and education, entrepreneurship and the environment.

“Despite Irma, we’ve kept those three topics throughout and into the recovery effort,” Ms. Takeuchi said.

Some of those projects include handing out Kickstart BVI microloans to businesses that have suffered after the storm, becoming a sponsor for the MALE (Mentoring Anointed Leaders Everywhere) summer camp, and providing 650 Chromebook laptops to senior students across the VI.

Another major project for Unite BVI is helping to fund the rebuild of Bregado Flax Educational Centre on Virgin Gorda. The foundation is repairing a building block and constructing 14 classrooms, and is currently going through the tender process with contractors, Ms. Takeuchi said.

“It’s a structural rebuild, and that’s not something we would normally get into, but this is something that’s near and dear to us,” she said. “We’re hoping to jumpstart this ASAP.”

Two more employees also recently joined the Unite BVI team (whose salaries are covered by the Branson family rather than by donations), including executive director Ms. Smith.

“Prior to us joining there were just two women, two female dragon slayers. I like to say I joined the dragon slayers because two people — Lauren [Keil, foundation manager] and Kim — did an incredible amount of work,” Ms. Smith said.

The director said that while funding is obviously critical, so are relationships with other non-profits, businesses and organisations.

“Yes, the money is there, but the spirit and the humanity of it, and the work — it’s about more than just donating money,” she said. “It’s about, okay, we have this money here: How do we work together and disburse it?”

The local Red Cross branch, though it suffered damages to its own headquarters in Road Town, has preserved its tried-and-true programmes while also starting new ones as part of its disaster response.

One initiative that the group launched for the first time was its financial assistance programme.

The Red Cross distributed more than $3 million to struggling households across the territory — cash injections that officials said benefitted nearly 12 percent of the population.

Making direct payments to disadvantaged people is a practice that the International Red Cross has been using for almost two decades in countries including Nigeria, Greece and Nepal. And with those direct payments, VI residents were able to pay for rent, transportation, education, household items or anything else they needed after Irma.

“The cash programme was far and away the most successful thing we did, and it set a precedent worldwide,” said Geoffrey Brooks, chairman of the BVIRC board of directors. “It really shook up a lot of people that we could have pulled it off. I’m really proud of it and I think we all are. We used a lot of lessons that had been used over the years and applied them in this instance.”

The Red Cross has also rolled out several rounds of psychosocial support training to help residents cope with the mental stress of the storm, as well as “darkness-to-light” training, which helps people who work with young children identify signs of abuse, the chairman said.

Some residents haven’t stopped since Irma to evaluate the toll the storm took on their mental health, Mr. Brooks said.

“It’s going to take another year or so before it feels like we’re really getting back to normal,” he said.

Meanwhile, Team Rubicon, a disaster response non-profit, was one of the first international relief organisations to reach Tortola after Irma.

The group helped coordinate aid distribution with local entities; assisted in transforming the former Clarence Thomas Ltd. building into a new space for Elmore Stoutt High School; and flew in many sets of volunteers.

More recently, though, the group’s primary project has been helping to rebuild the West End Community Centre alongside the BVI Red Cross and the Ministry of Health and Social Development, said project manager Charlie Peschardt, who is stationed on Tortola for a year.

Mr. Peschardt said he can understand the occasional frustration from residents that the recovery process — especially the rebuild of community centres and schools — doesn’t appear to be moving swiftly, but often much work is happening behind the scenes.

“The BVI had a direct hit from one of the largest hurricanes ever, so from the beginning there was a general acceptance that this was never gonna be super fast. I do think the BVI is in a much better position than maybe it would have seemed it would be on Sept. 6 last year,” he said. “There are plans that are now being put into action, but it always takes a while to work out what needs doing, what the priority is.”

Back at Wonder Years, Lanny Watson pointed out a large door on the upper level that he installed himself. He likely wouldn’t have been able to do that bit of handiwork before leaving the UK for several weeks and volunteering with All Hands and Hearts, he said.

“What I’ve really enjoyed about doing this is I have no construction background … and I’ve been getting taught by these guys — just little bits and bobs — and it’s nice to know I’ve made a little bit of difference,” Mr. Watson said. “I think that’s with everyone here: You get thrown into the deep end, but ultimately that’s what makes All Hands work. Everyone is doing their little bit towards something big.”

Not everyone working on AHAH projects has flown in from overseas.

“We’ve had a lot of volunteers as well from the community,” Mr. Lederman said. “We’ve employed local masons, local contractors.”

The several rounds of AHAH volunteers who have taken the time to work in the VI for free have been roughing it while they build roofs and paint walls.

Since about February, the group has set up camp in Ivan Dawson Primary School in Cane Garden Bay — yet another one of the schools the members are repairing.

“For us, it’s like our home. It is a building site, so there is sand in your bed; you gotta pump up your air bed; mosquitoes are buzzing around,” Mr. Watson said. “But we make it work. All the volunteers — it’s like all for one, one for all.”