Throughout the recent lockdown, the newly formed group HandsFree BVI distributed diapers, food and other aid to needy residents. But as the economy starts reopening, the volunteers’ work isn’t done. …

END_OF_DOCUMENT_TOKEN_TO_BE_REPLACED 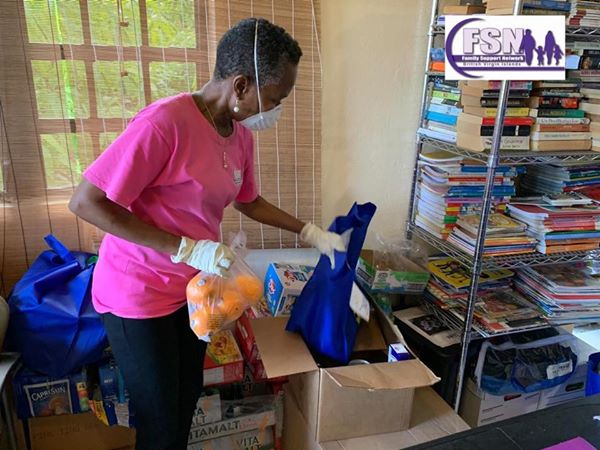 Volunteers and staff from the Family Support Network and BVI Red Cross helped distribute water and other essential items throughout the recent lockdown. (Photo: PROVIDED)

Throughout the recent lockdown, the newly formed group HandsFree BVI distributed diapers, food and other aid to needy residents. But as the economy starts reopening, the volunteers’ work isn’t done.

“Right now, we have 600 people who just need general assistance,” said Alex Durante, one of the founders of Hands-Free BVI. “Some are asking for simple things like bread and water. These are basic things that people need to survive.”

Others are asking for different types of support. Ms. Durante noted that requests for food assistance have dropped since supermarkets reopened to the public for limited hours, but requests for money to pay rent and other bills are on the rise.

“It was the end of the month, and it’s a very uncertain time for a lot of people,” she said. “I’m hoping a lot of people get their jobs back. They’re afraid of being kicked out of their house. And if you had to pick one, food or shelter, you’d choose to pay rent.”

HandsFree BVI isn’t alone. Other non-profit organisations and government agencies are also struggling to keep up with needs as unemployed residents and others face desperate situations in an economy decimated by the coronavirus pandemic.

“A lot of persons unemployed prior to shut-down — mostly in the construction and tourism industries — had no income during the lockdown, and jobs are very scarce,” explained BVI Red Cross Director Stacy Lloyd. “If the economy doesn’t open, [people] can’t eat.”

During the lockdown, the BVIRC, HandsFree BVI, Family Support Network and others ramped up capacity and adjusted their efforts to fit the needs of a distressed community. Now they are adapting to changing needs.

HandsFree BVI is logging requests for financial assistance and gauging the demands, but it is unable to assist as many people as members had hoped, Ms. Durante said.

Similarly, FSN President Judith Charles said that agency is “back to what they do” and operating normally, but there has been an increase in the number of people who need help because of financial troubles.

“We have so many people without work and laid off for three months with no paycheques,” she explained.
Before the first lockdown at the end of February, the FSN distributed food to clients who would normally come for food, but “nothing like what we’re seeing now,” Ms. Charles said.

Both FSN and the Red Cross assisted with the distribution of government-funded food packages through the Territorial Provisioning Programme, which was announced on April 18 shortly after news of the first Covid-19 death and a week-long extension of the round-the-clock curfew.

Well before that effort launched, though, the organisations had already set up a food bank programme to provide assistance, according to Ms. Lloyd.

“Then we started to receive calls before the two-week lockdown, and we started to provide packages,” she said. “People would call us, register and provide information, and once we determined which people were in need, we placed them on a list and had volunteers deliver packages.”

Prior to the shutdown, the BVIRC also picked up medical prescriptions for the elderly and for sick people. A psychosocial hotline was set up to help people who were feeling stressed or overwhelmed, and it is still open to the public.

“Homeless persons were not forgotten,” Ms. Lloyd said. “We made sure they had meals and understood what was going on. We provided masks and literature.”

Noticing an increase in domestic violence calls, the BVIRC also has had to call the police to some homes during the lockdown.

Now, the organisation has opened its doors after outfitting its building for social distancing.

The BVIRC is largely funded through government subventions and revenue-generating streams like its thrift store, first-aid training, medical equipment rentals, training facilities and conference room rentals, but it also relies heavily on donations and fundraisers to provide about 60 percent of its overall operations and services.

In recent weeks, FSN board members have worked with staff and other volunteers to pack bags of supplies, and members of the Lions Club and other service groups made deliveries.

“There was no way we’d be able to do any of what we did without those volunteers,” Ms. Charles said, adding, “We needed endless volunteers.”

For a while, the government contributed to the pantry since the FSN was providing food throughout the territory. The organisation was able to use government funds to purchase supplies at supermarkets.

“In March it was nearly every day we have to go shop- ping,” Ms. Charles said. “Normally supplies are donated, and there have been a good amount of donations made to us for the purpose of the pantry.”

Donations have reached sister islands as well, she said. Be- fore the pandemic, only a couple of people in Virgin Gorda regularly requested assistance from the FSN, but in recent weeks food has gone to many more who needed it.

Under normal circumstances, the FSN receives a government subvention which covers a quarter of its costs, and the rest of the money comes from fundraisers and the public.

In recent weeks, residents got creative in raising money for the cause. Chefs on two crewed yachts raised over $10,000 by walking on their boats for hours.

They split the money between FSN and a women’s resource centre in St. Thomas.

HandsFree BVI — which was launched by Ms. Durante, Liz Barahona, Brittany Meyers and Jen Gress — aims to help anyone who is in need as a direct result of the pandemic.

What began as a Facebook post to see what was happening with vulnerable populations like the elderly, children, pregnant women, and the ill has turned into a full-fledged operation.

The group launched a website and Face- book page, compiled a list of 60 volunteers prior to the first lockdown, and began with helping people pay rent and utilities.

But with a large influx of requests and difficulty vetting them, eventually the group chose to focus on distributing goods for families, babies and the elderly.

The group received donations from different sources and was able to distribute items like diapers as well as food packages.

Ms. Durante commended the government and other agencies for stepping up to help those in need, but acknowledged that some people were overlooked with the limited amount of time and resources available. Group members continue to operate from their homes. Each day, volunteers review email requests for assistance and submit information into a system.

Group leaders then process the requests and prioritise needs in order to plan deliveries. Finally, volunteers deliver the items.

With the help of WIN BVI, Dream Big Group, Road Town Fire Station, MicroAntix Limited, Digicel, and individuals throughout the territory, the group says it has helped more than 300 people so far.

These organisations and many other residents are still waiting to hear if the government will provide an economic stimulus package similar to what countries around the globe are providing to their residents. With several promises for such a plan made for more than a month, a comprehensive package still hasn’t been announced.

Early last week, Premier Andrew Fahie said a plan would be made public “soon,” but he has not yet followed through.

As the reopening proceeds in fits and starts, however, there have been some boosts to the economy. Over the past week, contracts worth about $3.5 million were signed to repair three public buildings in Virgin Gorda with funds from a Caribbean Development Bank recovery loan.

Acting RDA CEO Anthony McMaster projected that $20 million would be injected into the local economy this year alone through projects administered by the RDA.

Residents can help others in the community by emailing dversoza@rtwbvi.com and choosing to donate to the Family Support Network, the BVI Red Cross or the Social Development Department. Residents can also visit bvihandsfree.com to support that group’s cause.

If you need food, medicine, or other assistance, the below services may be able to help.