Local News > Dispatches from the districts: Voters weigh in on Polling Day

Dispatches from the districts: Voters weigh in on Polling Day

To gauge voters’ thoughts on the new voting machines and their general opinions about the 2019 election, the Beacon reported from several districts on Monday. District Two After a raucous …

END_OF_DOCUMENT_TOKEN_TO_BE_REPLACED 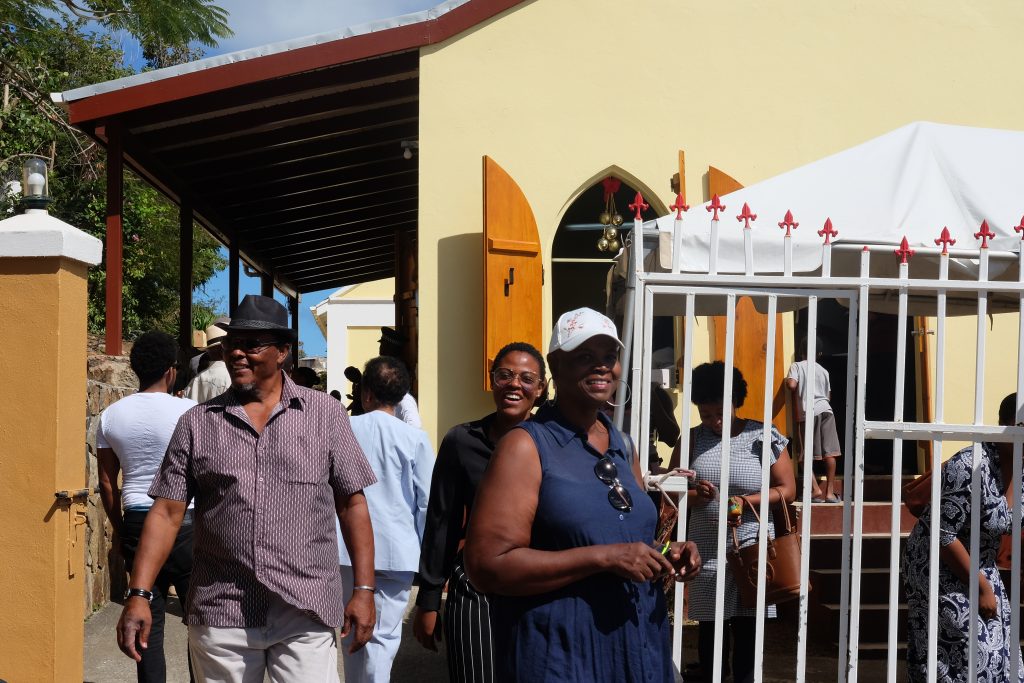 To gauge voters’ thoughts on the new voting machines and their general opinions about the 2019 election, the Beacon reported from several districts on Monday.

After a raucous week featuring party motorcades and last-minute campaigning from candidates, Cane Garden Bay was calm on Monday morning.

A handful of voters mingled amicably outside a polling station at Ivan Dawson Primary School, catching up with friends and neighbours.

Ms. Hoyt described District Two contenders Mitch Turnbull and Carnel Clyne as “good guys.” “Nonetheless we are a small community, so no matter what happens I think we will have good representation either way,” she said.

Christian Cheraymond, another voter who cast his ballot at Ivan Dawson, said he was backing Mr. Turnbull. The National Democratic Party has not been unified over the past four years, he said, though he wasn’t sure yet if Mr. Turnbull’s Progressive Virgin Islands Movement represented a more cohesive team.

“I don’t know yet, but I just know about [Mr. Turnbull]. He has been doing what he has to do in his district, for himself,” he said.

As for the newly introduced voting machines, Mr. Cheraymond said he prefers the more old-fashioned way of hand- counting ballots.

“It looks pretty easy but I don’t trust it. If it’s electronic, things can happen,” he said. “People can find a way to hack things and make people get more votes than others, so I’m kinda sketchy about it.”

At the Thomas Ebenezer Primary School polling station for District Three, voting was delayed about a half hour because the voting boxes came in late.

Polling officers agreed that that the station should remain open for an extra half hour to be fair in the elections.

The VIP’s Dr. Arlene Smith-Thompson, Progressives United incumbent Julian Fraser, and NDP candidate Aaron Parillon were all at the station, roaming in and out of the building as the polls closed.

Out of the 1,707 registered voters, 1,055 turned out to vote by 4:30 p.m., said Linton Leonard, an information officer with the House of Assembly. In the morning, he said, the lines were long.

“They’ve done an outstanding job,” he said, noting that there were no arguments or hiccups.

In Road Town, voters from the Fourth District strolled into the polling station set up at the House of Assembly throughout the day. For most of the day, business went on as usual on the streets without any lines of traffic or signs of commotion.

Polling officers at the doors asked all voters to turn their cell phones off before entering the polls.
Voters described the process as “simple” and “straightforward” with the only significant change being in the shading of the circles rather than marking an “x” for candidates. The process typically took no more than a half hour for each voter.

As rain began to pour, the line grew up to a dozen people around 2 p.m. Children were not permitted in the building, but many accompanied their grandparents.

VIP District Four candidate Luce Hodge-Smith said the lines to vote in the district were very long in the morning. People were lined up by 5:30 a.m., Ms. Smith said. She, along with other candidates, were at the station throughout the day.

The Fifth District also saw sparsely populated polling stations after the initial morning rush, although those who did show up said they were satisfied.

Presiding officer Lena Stoutt-Frett said at Enid Scatliffe Pre-primary School that voters were excited by the new machines, but turnout overall was “not what we expected.”

She added that by 5 p.m. a little more than half of registered voters for that polling station had showed up to vote by her estimate. NDP chairman Myron Walwyn also speculated that there was low voter turnout from his observations.

“There seems to be some voter apathy,” he said.

At the nearby Althea Scatliffe Primary School, District Five returning officer Connie George said that only a handful of voters showed up without identification. She added that all of them returned with ID and were able to vote, and that no one was turned away because they did not have identification.

“It went awesome. It was so awesome. I did it in 2.3 seconds. That was so easy,” said voter Delani Chapman, who left ASPS around 5:30 p.m. after voting for the first time.

“Tortola is in bad shape,” he said. “To get back in shape you need somebody to do better for the territory.”

In the Sixth District returning officer Avelinda Freeman said “everything went smoothly” both at Alexandrina Maduro Primary School in Baughers Bay and the Joyce Samuel Primary School in Belle Vue.
When the polls opened at 6 a.m., she added, voters were lined up out the door, hoping to cast their ballots before work. She said both polling stations were operating without issue.

Voters overall seemed pleased with the electronic voting system, like Sixth District voter Alvin Dore, who said it was “easy and straightforward.”

“Once you got the card and your ID, you’re gone clear,” he added.

“Easy as 1, 2, 3,” said another voter, Rawle Hannibal. “The process was very straight-forward.”

Up in Belle Vue, Chantal Davis came to the primary school at 1:30 p.m. to avoid the morning crowds, arriving right before the grey overhanging clouds turned into rain.

She is on maternity leave, and came with her young daughter and infant son, hoping to show them that it’s “their right to vote.”

This year she said she mixed up her vote instead of voting down-ballot for one party. She thought a coalition government would be a good thing, rather than one party having “all the opportunity and all the power.”

“It will be interesting to see who will win,” she said.

Around 6 a.m., a line of people spilled out of the Long Look Methodist Church Hall — the sole polling station in District Seven — and wrapped all the way down to The Stickett in Long Look.

Police officer Kevin Eddy was one of many voters in the long line.

After waiting about two hours to cast his ballot, Mr. Eddy said, he returned home and put on his uniform to complete his second responsibility of the day: directing traffic outside the polling station. Three other officers remained on duty inside the building, though by mid-morning the line of voters outside had all but dissipated.

Police officers maintained an official presence at every station on Monday, but Mr. Eddy said he hadn’t heard of any fights or disagreements that morning.

“It’s not as violent as some places in the Caribbean,” he said. “Some countries take politics to a whole other level.”

A few minutes down the road at Willard Wheatley Primary School, voters were also lined up and ready to go early on Monday.

“The first hour and a half of the morning was really hectic,” said Eunice Crawford, one of several election staff working at the station.

In that brief time period, more than 300 voters came through, Ms. Crawford estimated. By about 11 a.m., the number of voters swelled to 528 — nearly a third of the 1,778 total registered voters in the district.

Despite the initial crowd, Ms. Crawford was pleased that voting machines had been keeping up with the demand.

“We have had absolutely no hiccups,” she said. “Everything has been working well.”