Sea Cows Bay is the target of renewed disaster-preparation efforts spurred by a report from the BVI Red Cross, which aims to help residents identify what risks they face and …

END_OF_DOCUMENT_TOKEN_TO_BE_REPLACED 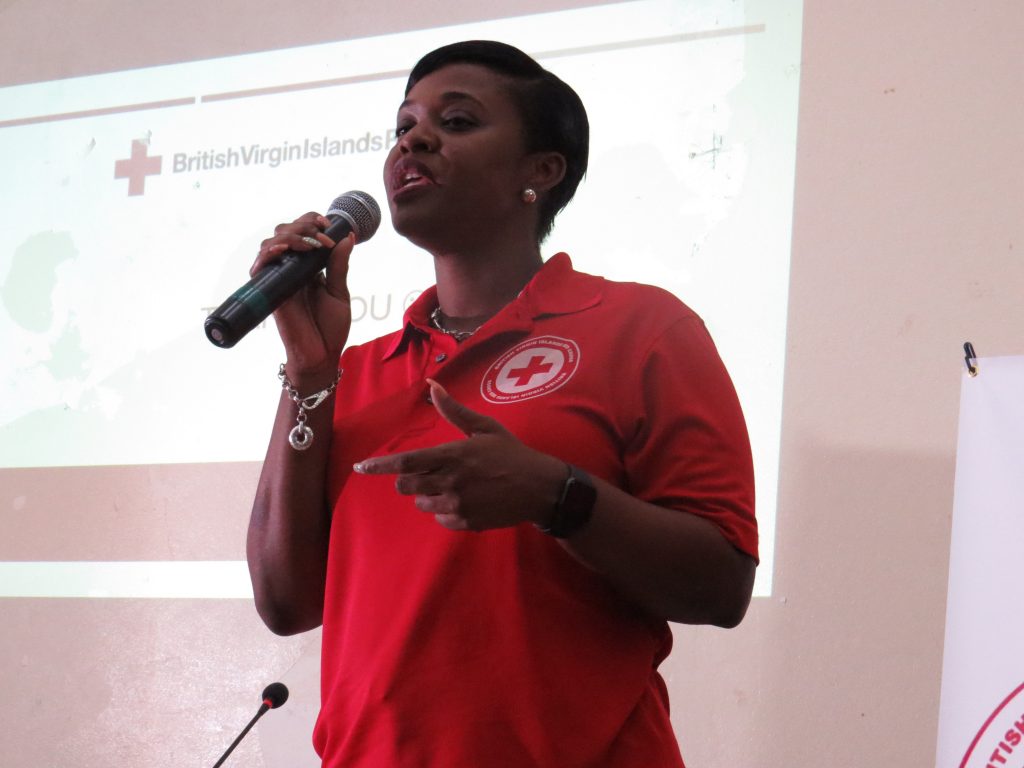 Sea Cows Bay is the target of renewed disaster-preparation efforts spurred by a report from the BVI Red Cross, which aims to help residents identify what risks they face and carry out a plan to fix them.

“Sea Cows Bay has been identified as one of the most vulnerable communities in the territory,” opposition member Julian Fraser (R-D3) said while thanking the BVI Red Cross for taking a special interest in the area. “We want to stay on the cutting edge.”

Members of the BVI Red Cross shared their insights into the challenges facing the community last Thursday at the Valerie O. Thomas Community Centre as they presented the Enhanced Vulnerability and Capacity Assessment to area residents. Mr. Fraser urged attendees to arm themselves with information from the report and take charge of improving the community.

“The directors are appealing now to assist in helping yourself,” Mr. Fraser said to the approximately 50 attendees. “Those initiatives that come from the outside sometimes act as a catalyst to move you.”

Given its location, Sea Cows Bay is particularly susceptible to hurricane destruction, flooding tsunamis, landslides, siltation issues, storm surge and mosquitoes. But there are ways community members can get involved to mitigate these risks.

The International Federation of Red Cross and Red Crescent Societies, a global humanitarian organisation that coordinates and directs international assistance following natural and manmade disasters in non-conflict situations, supports programmes on risk reduction and fighting the spread of diseases. The societies use the EVCA process to involve community members in analysing risks at the local level and formulating a plan to address them.

To determine which area should be the first to get an EVCA, the Red Cross compared communities across the territory using its “Strategic Targeting Methodology” selection tool. Sea Cows Bay emerged as one of the most vulnerable, along with Purcell, East End and Jost Van Dyke. Ms. Lloyd said the facilitation team plans to provide assessments for these communities in the future.

The plan assesses the community’s ability to resist natural hazards, focusing on disaster preparedness and showing where residents can focus their efforts to better protect themselves. The BVI Red Cross, supported by the British Red Cross team in the United Kingdom office, conducted its research between Aug. 19 and 31. Disaster Management Officer Peterson Yearwood headed the facilitation team with three other EVCA field officers, who worked with the SMART Communities Project Team at the Department of Disaster Management.

Experts focused on identifying and understanding threats, and determining what residents can do about them.

There were several reasons why the facilitation team placed Sea Cows Bay at a higher risk than other areas in the territory.

“It was the highest because of flooding and poor waste management problems,” according to the report. “The community is also known for having a vulnerable population, which is predominantly the Spanish speaking members, in which many are migrants and live in vulnerable conditions.”

Researchers said the language barrier means some residents have fewer communication sources when it comes to preparing for and dealing with a natural disaster.

Community members in flood-prone areas can struggle to recover from severe flooding, such as that experienced after Hurricane Dorian passed the territory last year.

“Some individuals (multilingual) living within the low-lying regions who experienced flooding and needed assistance are not connected with other members of the community and often suffer,” the report elaborates.

The report draws from a small portion of the Sea Cows Bay population, surveying 51 participants in the 2019 Disaster Risk and Preparedness Survey out of the 2,203 people living there. BVI Red Cross also conducted community meetings at the end of last year, but only 11 people went to the August session, and seven people went in September.

Sea Cows Bay is also particularly susceptible to hurricane damage due to its location, which is compounded by flooding issues, according to the report.

“The gravity of exposure within the entire Sea Cows Bay community has been graded high,” the report states. “This is due to the low-lying regions being located on the flood plain, and because of the location and topography of the elevated regions within the community.”

Buildings that are still damaged from the 2017 hurricanes presented one of the biggest issues. The community centre where the meeting took place was mentioned, as it still needs replacement windows.

The same goes for personal residences.

Of the 50-plus survey participants, 65 percent said the hurricanes caused property damage.

“Housing structures are old and in need of repairing and upgrading to meet building standards,” according to the presentation.

Of particular concern are houses made from sheetrock that are lacking storm shutters and located in flood zones.

Researchers also identified issues with stocking up on food and water, citing, “little preparation to stock up on food prior to a hurricane season and a reliance on unhealthy canned goods which can lead to illness, while after a storm cisterns can become contaminated.” Meanwhile, Community Based First Aid and Community Emergency Response teams need retraining, and newer residents need access to both types of training, the researchers found.

Household surveys also indicated a need for community education on disaster preparedness. A fifth of respondents said they were not aware of nearby evacuation routes, and nearly a third said they do not know about the early warning system.

Researchers did point to a few positives for hurricane preparedness, including the community centre’s drop-in clinic available two days per week. Several nearby shops and markets are poised to deliver food and necessities. Sea Cows Bay is also home to construction workers and trucking businesses.

Residents deal with major flooding issues both because it is geographically in a place that gets a lot of rain, and because of inadequate drainage systems.

Sea Cows Bay faces bigger challenges when it comes to heavy rainfall because it is a coastland and highland, meaning it receives a lot of rain and water collects easily there. And when it pools, there isn’t anywhere for it to go.

“Community members expressed major concerns on poor management of ghuts and drainage routes, believing that this poor management has caused the community to be prone to frequent flooding,” the report says.

Some community members struggle to find the help they need with water damage.

“Many homes/buildings need repairing,” the report says. “This highlights that members within the community are vulnerable and do not have the sufficient funds for repairs. Furthermore, the community is at risk and is currently unable to respond or be fully prepared to withstand another system.”

Among the infrastructure issues is a lack of hurricane shutters on many houses in the area. The presentation also explained that areas around some houses need to be cleared of debris that could contribute to flood damage of homes and roads.

The presentation pointed to an “increase of bulk waste and derelict vehicles in the community” as one of the main issues causing an increase in mosquitoes.

“The community has been experiencing the high mosquito prevalence and they feel as though no one is helping,” according to the report. “They believe that for anything to be done, they will have to conduct these actions on their own.”

The BVI Red Cross did note that the Environmental Health Division periodically conducts fogging to lower the number of mosquitoes within the area and treats mosquito breeding sites. But it sought support from government and community-based organisations to make a bigger dent in tackling the issue.

The big concern is preventing the spread of disease.

The Aedes aegypti mosquito, mostly located in tropical places, is the main carrier for viral diseases including dengue, Zika and Chikungunya. Though the report says not many people have caught these diseases in the area, “the community still constantly expresses deep concern for the mosquitoes.”

Mosquitoes breed in stagnant fresh water that can collect in trashcans, accumulated garbage, gutters, tree stumps and mud piles. That is one of the main drivers in wanting to clean up the bay area. Poor garbage disposal is especially noticeable from November to April because of the number of festivities, according to the report. Then mosquito season ramps up from May to August.

The report said it is important for residents to advocate for help from government and other businesses to clear the debris where mosquitoes breed.

Mr. Fraser also pointed to an ongoing issue — the need to replant mangroves that were damaged by the 2017 hurricanes, which could provide some protection against future natural disasters.

He said he has been pushing for government to prioritise this project for years and was repeatedly told there wasn’t enough money to do it.

He said this made reported dredging efforts in the nearby bay disappointing. He said the $1.5 million spent on those contracts could have been used to address pressing health issues in the area.

The opposition member also pointed to other areas in need of repair in the area: street lighting damaged by Irma, derelict vehicles and vessels, and other structural concerns.

The BVI Red Cross also said in the report it sees an ongoing need to interact more effectively with vulnerable communities and key stakeholders to reduce risks and adapt to climate change. To tackle these concerns, the organisation plans to work with faith-based organisations, schools, clinics, the Environmental Health Department’s Vector Control Unit, and more.

For dealing with the mosquitoes, BVI Red Cross suggested implementing a fogging schedule rather than just waiting until many people file complaints or after heavy rains. Campaigns on dengue and other insect-borne diseases are needed, as well as educating people about removing stagnant water and other prevention practices, the report noted.

BVI Red Cross volunteer Anisha Brewley, a EVCA field officer, encouraged attendees to join a committee to help push for these actions to be carried out. Attendees also received copies of family emergency plans to be used for planning ahead of a natural disaster.

The guidebook offers information including what to pack in an emergency kit, such as water, food, clothes, blankets, first aid supplies, hygiene products, important documents, and any special items such as baby formula, spare glasses and medications.

The BVI Red Cross advises residents to revisit their emergency plan every year in January and May, or after moving to a different community.