Walk and vigil held for Alzheimer’s

More than 50 people attended an annual march and candlelight vigil hosted by the Virgin Islands Alzheimer’s Association on Friday evening as part of its observance of World Alzheimer’s Month. …

END_OF_DOCUMENT_TOKEN_TO_BE_REPLACED 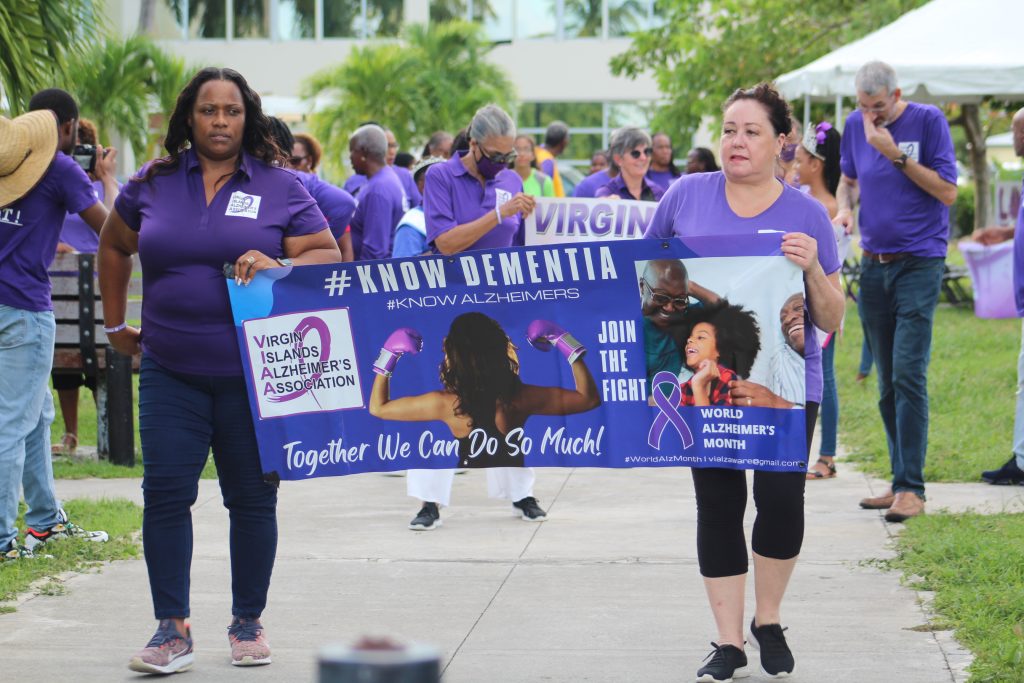 More than 50 people attended an annual march and candlelight vigil hosted by the Virgin Islands Alzheimer’s Association on Friday evening as part of its observance of World Alzheimer’s Month.

The VIAA aimed to “Turn the Town Purple” with public participation in the walk and vigil while raising awareness and challenging stigmas about Alzheimer’s and other diseases that cause dementia. This year’s theme was “Know Dementia, Know Alzheimer’s.”

VIAA Patron Tara Curtis, the wife of Governor John Rankin, was among the speakers at the Friday event.

“Like many of you, I am also experiencing a loved one with Alzheimer’s: my mother,” Ms. Curtissaid.“As family members, as care partners, as caregivers, we share many experiences: the loss of the person that we know, the feelings of helplessness, the sadness, the tears, and the frustration. But there is hope. There are ways that we can still connect with our loved ones.”

One of those ways is music, she said. Another way is to continue to raise awareness.

“Our vision of the VIAA is to have a Virgin Islands community that is dementia-friendly,” she added.

The programme — which followed a march through Road Town — included speeches, musical interludes, and dancing.

“How many of you do line- dancing?” asked VIAA President Edna Williams. “If you don’t do line-dancing, you’re missing out on something. And you’re missing out on something, because line-dancing really activates different parts of the brain. It’s planning, movement, strategy — and it’s intentional. Learning anything new, from choreography to dance routine, is an efficient and effective way to create new neural pathways in the brain. And that’s what we all need to do.”

Participants also held a candlelight vigil, where they sang together in remembrance of loved ones they lost to the disease.

Dementia refers to a decline in mental ability that impacts daily life, and Alzheimer’s is its most common cause. Educating others about the disease and other causes of dementia can help empower caregivers and families, according to the VIAA.

Throughout the month of September, members of the VIAA have partnered with businesses and government agencies to raise awareness.

The VIAA also decorated the Road Town roundabout with purple balloons and flags, and it has posted other purple flags across the territory.

Following the march, the VIAA took part in a race hosted by the H. Lavity Stoutt Community College on Saturday.