The National Democratic Party rally on Saturday was a night full of music, dancing, cheering and political promises. The roughly three-hour event was held in the Road Town Market Square …

END_OF_DOCUMENT_TOKEN_TO_BE_REPLACED 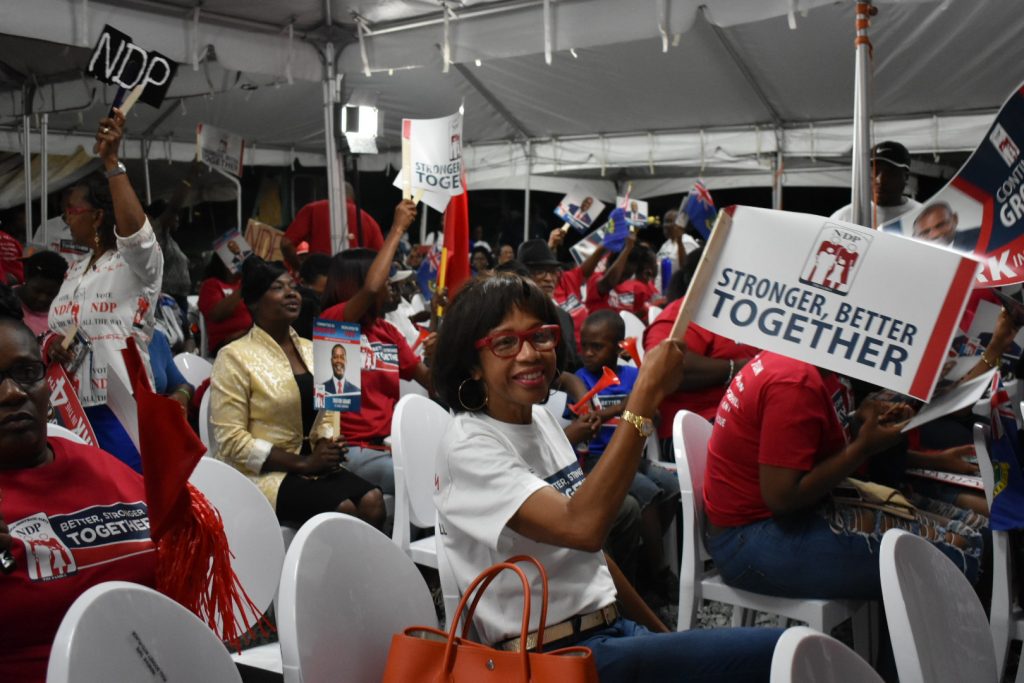 The National Democratic Party rally on Saturday was a night full of music, dancing, cheering and political promises.

The roughly three-hour event was held in the Road Town Market Square under a tent crowded with about 400 lively attendees eager to show support for the NDP’s roster of candidates.

The event kicked off with remarks from NDP Chairman Myron Walwyn, who addressed some of the recent criticisms of the party, offered solutions and aimed barbs at his political rivals.

Mr. Walwyn began by addressing one of the biggest challenges that the NDP has faced during its past two terms: financial management and reporting. The party has been harshly criticised in part because several audit reports on government accounts were delayed for years.

“Yes, there are some problems,” Mr. Walwyn admitted. “We have some financial reporting issues, and the audit reports came out late and it’s not supposed to happen.”

However, Mr. Walwyn, the minister of education and culture, also noted that these problems are not solely NDP issues.

“It also happened under the VIP,” he said of the Virgin Islands Party, which last held power from 2007 through 2011. “I’m not saying that because I’m playing tit for tat. … I’m saying that if those same problems happened under two finance ministers, it means we have systemic problems in the service.”

Mr. Walwyn asserted that training for public officers is the answer to fixing these problems.

The chairman also warned against alleging corruption without proof.

He also said that no one has provided proof of corruption and argued that unsupported allegations lead to “overregulation.”

“You have so many eyes on top of you in the international community that they [will] come with all kind of rules,” he said. “When they come with all [those] fancy rules, the money [goes] overseas and most people here can’t get a cent. That is what happens.”

Mr. Walwyn himself has faced criticism recently after an audit censured his ministry’s Elmore Stoutt High School wall project, in part for contravening the Public Finance Management Regulations. The minister has defended the project.

After taking the crowd through a list of what he described as NDP achievements — including the new Peebles Hospital, the cruise pier project and an increase in CXC rankings — Mr. Walwyn said, “I heard a radio message the other day where somebody who was with us before [was] taking credit for some things.”

Mr. Walwyn was apparently aiming the barb at his former his former NDP colleague Ronnie Skelton, who was fired from his ministerial position in November after announcing his plan to lead a new party into the election.

Additionally, Mr. Walwyn referred to the other parties’ behaviour as “bad-mindedness” and danced with his fellow candidates to the song “Too Bad Mind” by Jamaican dancehall artist Elephant Man.

Mr. Walwyn finished his message by addressing recent criticism of the NDP’s current roster, which lacks candidates to contest the First and Second districts.

“Don’t mind the talking that we don’t have a full slate,” he said. “It’s not the quantity; it’s the quality.”

He subsequently noted that NDP has five incumbents on its roster, while the “the quantity team” — the VIP — only has one candidate who previously has been elected to the legislature.

Following Mr. Walwyn’s remarks, the other at-large candidates and each of the seven district candidates gave brief remarks about their qualifications and plans. They covered topics ranging from Aaron Parillon’s promise that he will resolve flooding issues in the Third District and increase cultural preservation to Sandy Underhill’s promise to develop women’s rights in the territory.

“I will be the leader who is instrumental in developing a society in which women and men can enjoy equal opportunity,” Ms. Underhill promised, adding that she would “establish a platform to empower and support our women, creating opportunities for our single mothers by helping them to obtain the necessary skills in parenting, coping and other critical areas.”

The event came to a close after a passionate message from Fourth District incumbent Mark Vanterpool, the minister of communications and works, who repeatedly bellowed reminders that he is still “the action man.”

The NDP will hold another rally on Saturday at the Sunny Caribee parking lot on Waterfront Drive, where members said they will provide a clearer outline of their policy goals.