Local News > A warm welcome for an uncertain year

A warm welcome for an uncertain year

With encouragement from radio host and emcee HBH Da Don, a woman stood at the edge of the stage, held out her arms, and fell back into the crowd.   Capping …

END_OF_DOCUMENT_TOKEN_TO_BE_REPLACED 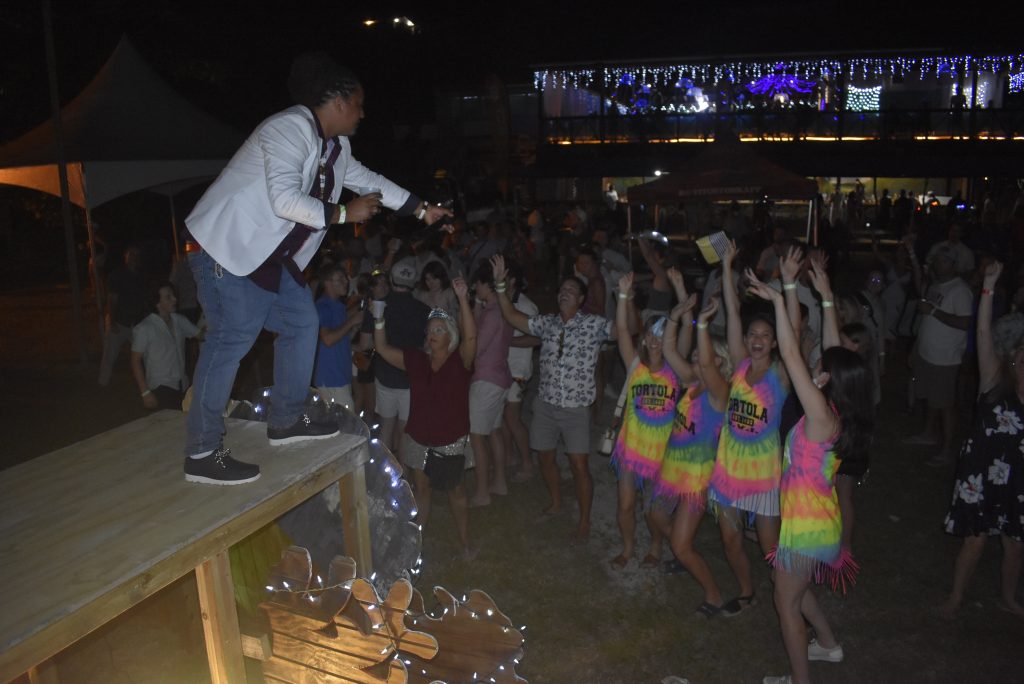 As tourists and residents gathered to ring in the new year, rising Covid-19 cases cast a shadow on some of the celebrations. But at Foxy’s Old Year’s Night on Jost Van Dyke, above, many revelers basked in a sense of pre-pandemic normalcy. (Photo: JOEY WALDINGER)

With encouragement from radio host and emcee HBH Da Don, a woman stood at the edge of the stage, held out her arms, and fell back into the crowd.

Capping off another year defined by the pandemic and its accompanying uncertainties, the scene at Foxy’s Old Year’s Night was one of pre-Covid-19 normalcy, and despite the exploding case count, attendees and organisers were elated to celebrate as they had so many times before.

He also thanked Premier Andrew Fahie’s administration for allowing the party to happen, adding, “I give a thumbs up to him.”

On Dec. 31, Chief Medical Officer Dr. Ronald Georges urged residents and businesses to avoid large gatherings, and Foxy’s director Justine Callwood said the staff members were nervous about throwing a party during such a precarious moment.

But after scrapping their 2020 party because of the pandemic, they felt that the time was right to revive their tradition, Ms. Callwood said.

They hoped to cut down on excessive crowding by partitioning the party into sections that patrons had to pay to enter, she added.

Though Ms. Callwood acknowledged that it was hard to enforce mask wearing and hand washing, “We feel like at this point everyone understands what is expected and required of them.”

She also noted that the crowd was composed mostly of visitors rather than residents, which she said may have limited the virus’ spread.

According to the government’s most recent Covid-19 Dashboard released Monday, of the 601 known active cases, 73 were detected during travel and entry screening, while 528 were local cases or contacts of cases.

Though Ms. Callwood said the pandemic did seem to hurt the bar sales, Foxy’s still performed about as well as it did pre-pandemic thanks to ticket sales.

And although the pandemic also presented some logistical hiccups — some guests who were unable to travel cancelled their reservations, for example — Ms. Callwood and her father were happy to ring in the new year with flair.

“We really wanted to come back and put a stamp on it, and I think it was terrific fun,” Ms. Callwood said.

At the Loose Mongoose at Trellis Bay, the vibe was more subdued, although people still danced to live music from Fuze and Xtreme Band, said General Manager Trefor Grant.

Because of the Covid-19 outbreak, Mr. Grant didn’t know what to expect for the restaurant’s bash, and though he said the rising cases did impact attendance, he believed this was true for all establishments across the territory.

His restaurant still did good business, he added.

Reflecting on the past year, Mr. Grant said that it was tough to deal with the pandemic, and his biggest hope for 2022 is that the world might finally get the coronavirus under control.

For accountant Jacob Versteegh, 2021 was a year of change.

He moved from his native Australia to start a new life in the Virgin Islands, and even if it is impossible to vanquish the pandemic in the new year, he is hopeful that humanity will at least learn to live with it.

“I think … everyone is going to kind of accept it; we’re going to move on from it. Maybe I’ll be able to travel again, which would be nice,” he said.

Other residents rang in 2022 at church.

At Cane Garden Bay Baptist, Senior Pastor Dr. Melvin Turnbull led the congregation in kicking off preliminary celebrations of the 60th anniversary of the church’s founding on July 15, 1962.

“The word for us this year is ‘elevated,’” he said. “Ephesians 2:6-7 declares: ‘Yes, it is because we are a part of Christ Jesus that God raised us from death and seated us together with him in the heavenly places.’”