Three weeks after it began, a fire continues to burn deep within the towering piles of garbage at the Coxheath dumpsite. But completely extinguishing the flames — and therefore staunching …

END_OF_DOCUMENT_TOKEN_TO_BE_REPLACED 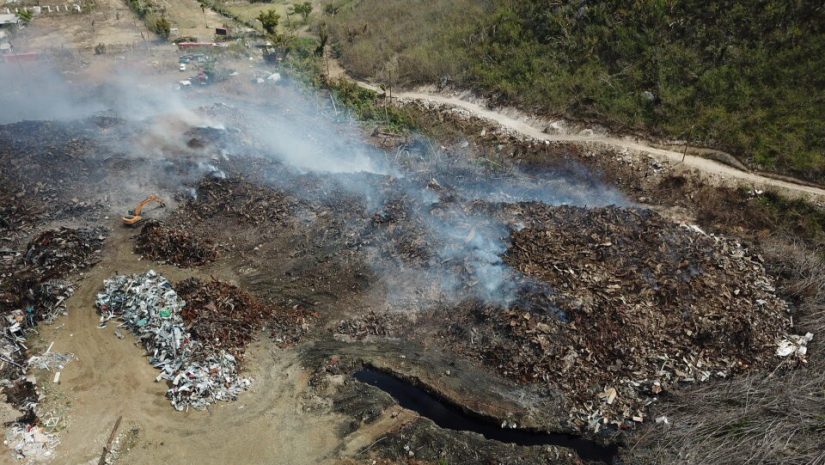 Three weeks after it began, a fire continues to burn deep within the towering piles of garbage at the Coxheath dumpsite.

But completely extinguishing the flames — and therefore staunching the smoke that has been drifting to nearby hillsides — is tricky work, Chief Fire Officer Zebalon McLean told the Beacon.

“[The fire officers] have done a lot of work,” Mr. McLean said Tuesday. “The only issue is that certain areas — the ones we haven’t been able to deal with — are still emitting smoke.”

To access the burning centres of the garbage heaps, firefighters and heavy machinery operators have been removing materials piece by piece from the pile before pumping water onto the then-flattened heap, according to the fire chief.

In other words: “cooling, removing and extinguishing,” he explained.

“We’re winning the war bit by bit, but we’re losing the battles,” he said.“We have the fire under control: It’s the smoke that’s the problem.The smoke will certainly stop when we’re finished with the entire area.”

Mr. McLean said the Virgin Islands Fire and Rescue Service is not equipped to fight a fire of this type and magnitude.

Firefighters have been pumping seawater onto the dumpsite, but several pumps have broken down after being used at such a high volume for a long period of time.

Those pumps were not intended to be used for several days on end, Mr. McLean said.

“Usually you would deal with a fire for several hours,” he explained. “For example, you wouldn’t see a fire truck at one site for several days.”

To help combat the fire, all water pumps from fire stations on the sister islands were brought over to Tortola.

“It’s a bit risky to take those from the other stations, but because of how the residents are suffering here, you got to pull out all the stops,” Mr. McLean said.

The fire chief added that companies that have large-volume discharge pumps and can distribute a huge amount of water, like irrigation firms, are much better suited for tackling a fire of this kind.

“The problem is no fire service was ever designed to fight this type of fire,” he said.
“Many people are angry and are saying that we should have already put this out, but a job like this is meant for a different entity.

“I’m not trying to make an excuse, I’m just saying it’s tough because residents have some expectations from the fire service. But we are trying and we are making progress.”

Mr. McLean said his department could potentially be grappling with damaged or broken equipment in the long-term as a result of putting out this fire, but was more concerned about the immediate effects of the blaze.

Some residents who live near Coxheath have temporarily moved from the area, and
others have experienced symptoms like coughing, nausea and sinus problems from the smoke and smell of burning plastic.

“We are concerned that we might lose resources here, like the pumps, but we can’t look at the future because every morning and evening people have to deal with the smoke,” Mr. McLean said.

“You can look at economics or complex strategies, but the most important thing is the people. It’s a very real concern. We must do our best to stop the smoke.”

The cause of the fire remains unknown and is under investigation, according to the Department of Disaster Management. The National Emergency Operations Centre is still activated at level two.