Over the course of just one day last month, more than 300 pieces of contraband and roughly $1,600 in cash and coins were found during a search of Her Majesty’s …

END_OF_DOCUMENT_TOKEN_TO_BE_REPLACED 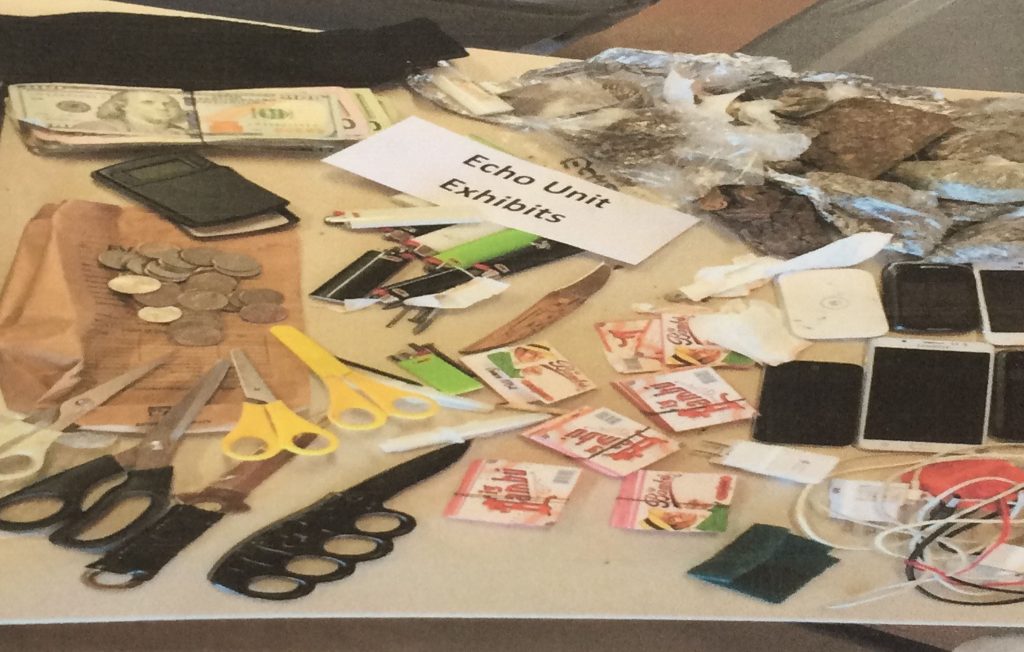 Photos from a report about a January search at Her Majesty’s Prison show contraband found on the compound. (Photo: PROVIDED)

Over the course of just one day last month, more than 300 pieces of contraband and roughly $1,600 in cash and coins were found during a search of Her Majesty’s Prison, according to a report on the operation.

Of that stash, certain types of prohibited items were more common: For instance, 58 “portions” of marijuana, 21 cell phones, several gallons of cell-made wine, 12 knives and a wide array of handmade weapons were found across several units.

But other contraband was more unusual.

In one unit, officials found a large brass knuckles knife. In another block, they discovered a portable welder, a glass bottle of olive oil, and rolls of soldering wire. In still another, a magnifying glass and a scale were confiscated.

Details about the coordinated Jan. 26 search, dubbed the “Operation Sterilisation Exercise,” were compiled by HMP and provided to the Beacon and several government offices. The report notes that there was an “excessive” amount of paraphernalia in some of the residential cells.

“One of the things we found is that there was quite a large amount of contraband on the compound,” said Mario Christopher, principal officer and operations manager at the prison, who described the search as a “pre-planned, well-coordinated, organised effort.”

“There were a number of cell-made shanks made of toothbrushes, fabricated out of whatever the guys could get their hands on,” he said. “We confiscated several jugs of what they called ‘prison hooch.’ That’s alcohol that the prisoners make.”

Mr. Christopher said he was also surprised by the large amount of cell phone accessories that were found, including 29 chargers, five Internet boxes and several pairs of headphones. There were also several recently released high-end phones uncovered — all the way up to the iPhone X.

“When we did a preliminary analysis in terms of cost, you’re looking at an excess of $13,000 worth of cellular phones,” Mr. Christopher said.

In order to properly gauge the amount of contraband within the compound, prison officials deemed it a priority to conduct a thorough search of the facility at the beginning of this year, Mr. Christopher said.

The prison is also under the new leadership of Superintendent Verne Garde, who previously worked at the Bordelais Correctional Facility in St. Lucia. Mr. Christopher said a search of this magnitude hasn’t happened at HMP since the facility moved to Balsam Ghut in 1997.

“We’ve done regular searching of the facility, and with the amount of contraband that we continued to find [Mr. Garde] thought it prudent for us to do a comprehensive, sectoral search of the entire compound,” Mr. Christopher said.

Starting at 6 a.m., a search detail made up of HMP staff with support from the police force and BVI Fire and Rescue Services assembled at the prison, according to the report. Police provided perimeter security, Mr. Christopher added, and two officers from the K9 Unit walked their dogs through the compound while prison officers searched cells.

The operation finally finished at about 7 p.m.

“It actually went on that long because of the amount of things that we were finding,” Mr. Christopher said. “So we thought it best to slow down and take our time and do it as methodically as possible.”

After Hurricane Irma, prison officers conducted a comprehensive “cleanup” of the compound with assistance from the United Kingdom military, Mr. Christopher explained.

“But over time, you know, things creep back in slowly,” he said. “Of course the sanitisation of the compound was mainly due to the fact that we want to create a safer, more secure environment for inmates, staff, visitors and the officers.”

Another search — or two — will likely happen again this year, he said.

Officers are also working to stop contraband from entering the prison in the first place.

“We’d have several instances where things were thrown over the fence; officers were there at the time to see what was happening, [and] the items were confiscated,” Mr. Christopher said. “And if persons were seen, police were called in to deal with the matter.”

As part of a broader mission to improve the prison, Mr. Garde drafted what he calls “the 20-point plan,” the principal officer said.

For one, new inmates are now placed in an induction wing when they arrive for a period of seven to 14 days. During that time, they are able to see a counsellor and are sent to a doctor to be checked for communicable diseases, he said.

“So we do all the necessary preliminary steps before we actually put that person into the general population to sensitise them to what prison is all about,” Mr. Christopher said.

Rehabilitation programmes are also tailored to each inmate, based on their individual offences.

“Some of this stuff is court-mandated, but by and large a lot of people are sent to prison, and most of the time they just languish,” he said. “When the time comes for them to be reintegrated into society, we hope that we have done our part to make them a better person.”