The West End Police Station, which had been out of service since Hurricane Irma, has officially reopened. The two-storey building across from the Benjamin A. Romney Park had its grand …

END_OF_DOCUMENT_TOKEN_TO_BE_REPLACED 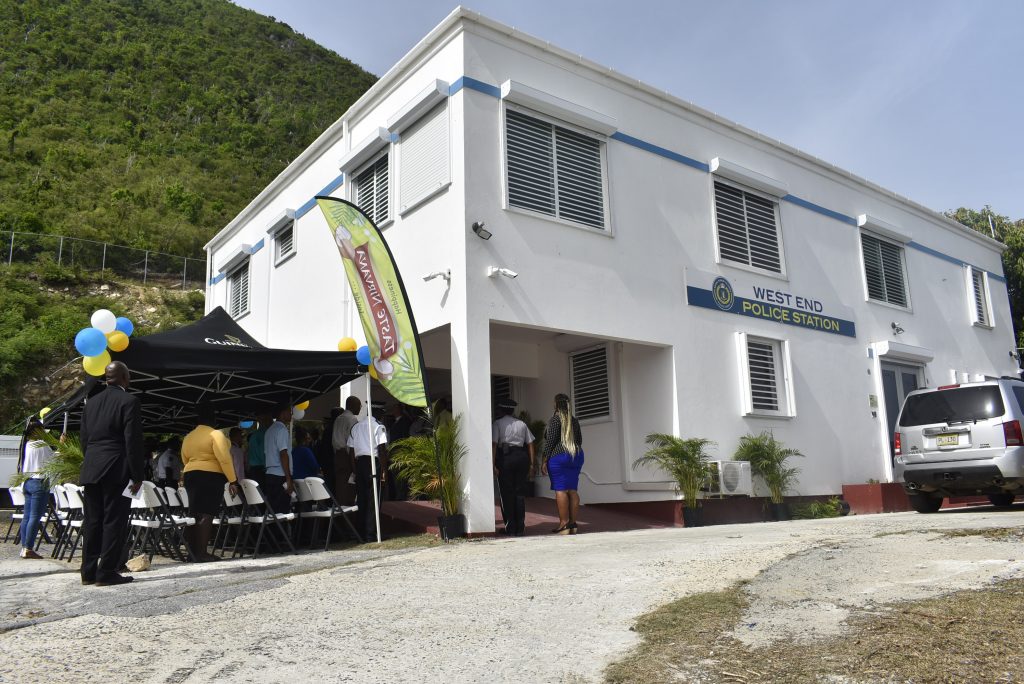 The West End Police Station re-opened last Thursday afternoon after a short ceremony and remarks by officials. For two weeks after Irma, it served as a pillar in the community where food was distributed. (Photo: ZARRIN TASNIM AHMED)

The West End Police Station, which had been out of service since Hurricane Irma, has officially reopened.

The two-storey building across from the Benjamin A. Romney Park had its grand opening ceremony last Thursday afternoon.

In the blazing afternoon heat, under black tents, and among sand flies, the ceremony was kept short but packed.

“We are all looking forward to what the governor has to say, because I know for sure he has a fascinating story to tell us about two lovely ladies named Irma and Maria,” Ms. Vanterpool said. Mr. Jaspert later joked, “If women like that are so difficult, don’t go near them.”

Getting serious, he added, “Today is a very happy day and a very important day. Security really is at the heart of the nation. It is the most important responsibility of any government.”

Mr. Fahie recalled what happened in the First District after Irma and Maria.

“This station for us in the West End area … became a place where the community was able to unify. After Irma there was nothing in this area from West End to Carrot Bay to Cappoons Bay,” he said. During the storms, the station’s roof was torn off and it sustained significant water damage that left the building uninhabitable. But Mr. Fahie remembered people in the community bringing pieces of plywood to repair the building instead of repairing their own homes.

“It was the area where all the food for the West End area was stored,” he said. “Every single day we would have a line, giving out food. God blessed this area to have some good donors where we didn’t run out of food.”

The station, Mr. Jaspert said, will also provide a base for immigration and customs as part of a territory-wide security plan across all three agencies. Serving the west end of Tortola, it shares one police vehicle with the Cane Garden Bay Police Station.

The UK contributed about $1.5 million for the post-hurricane repairs to police infrastructure across the territory, including covering the full cost of the repairs carried out by local contractors at West End and Road Town police stations, as well as supporting the Recovery and Development Agency-managed repairs to the Jost Van Dyke administration complex and the Virgin Gorda police barracks, according to the Governor’s Office.

“You are free to do what you want, but you are not free from the consequences of what you do,” Mr. Fahie said, explaining that the safety of the territory starts with citizens first.