Some online commenters celebrated the possibility of soon getting a modern, 12,000- square-foot West End ferry terminal when updates were given at a public meeting on Feb. 6. “This will …

END_OF_DOCUMENT_TOKEN_TO_BE_REPLACED 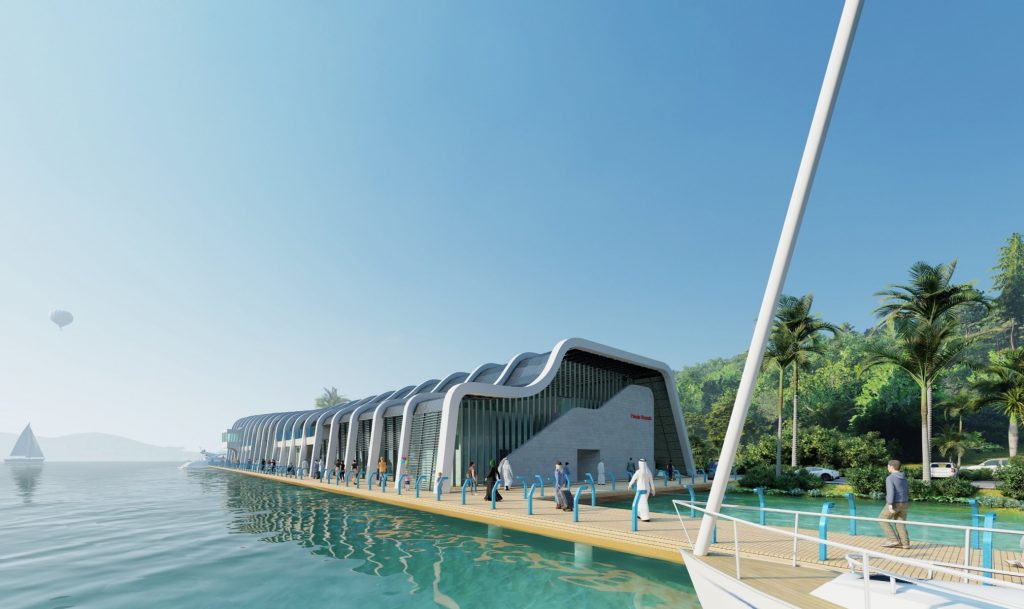 Community members were split on their feedback on new designs for the West End Ferry Terminal, with some appreciating the “futuristic” look while others found it “cold” and “uninviting.” (Graphic: RDA)

Some online commenters celebrated the possibility of soon getting a modern, 12,000- square-foot West End ferry terminal when updates were given at a public meeting on Feb. 6.

“This will be an awesome achievement when completed,” Lena Bally Warner wrote after the initial designs were presented. “Finally, the BVI port of entry in the West End would be of international standard, a facility to be proud of!”

But not everyone loved the terminal’s aesthetic.

“Thank God I’m not the only one who thinks this design is a misfit for West End,” Jascinth Campbell wrote on the BVI Community Board Facebook forum. “Hopefully it will have windows that can open and renewable energy.”

Other commenters shared their concern about the building’s ability to withstand hurricane-force winds.

They and in-person meeting attendees also had plenty of questions about the cost, “green” elements, contractor selection, construction timelines, safety measures and more.

The newly proposed designs aim to fix issues with past conceptual designs like limited wharf space, and they feature a “futuristic” aesthetic and amenities like a multi-storey car park, according to Dr. Karsten Galipp, the project manager from the company contracted to design the new structure and manage its construction.

Dr. Galipp said if construction begins on July 1, it could be completed by November 2023.

“It’s challenging, but it would be possible,” he said.

Last August, Premier Andrew Fahie promised in the House of Assembly that the new terminal would be completed within three years, which would be about seven years since the previous facility was destroyed by Hurricane Irma.

Mr. Fahie said a $1,048,909 tendered contract went to German firm INROS Lacknew S.E. for design and construction management, and the Recovery and Development Agency would select a separate contractor for construction.

Officials have said the terminal previously cleared about 40 percent of all arrivals into the Virgin Islands before it was destroyed by Irma in 2017, but they had been promising a new terminal for more than a decade by that time.

The largest plan, costed at $40 million, was proposed in 2010 under the then-Virgin Islands Party government, in which Mr. Fahie, who as First District representative represents West End, served as minister of education and culture.

But after the National Democratic Party came to power in 2011, then-Communications and Works Minister Mark Vanterpool said the project would be scaled back dramatically. In 2013, he proposed plans for a facility costing just under $5 million, but those plans never got off the ground either.

After the storm, tentative plans to work with a private donor to build a 27,000-squarefoot building fell through in 2019. Instead, ferries to and from St. Thomas operated through a temporary facility.

During the Sunday meeting, RDA CEO Anthony McMaster introduced the initial designs developed by the company and the RDA based on a “statement of requirements” coalesced from stakeholders in the government and private sector.

“We’ve had several meetings over the last few months — or years rather — based on all the information that has been gathered throughout the many, many years,” he said. “There have been several prospective designs that were developed, many of them by BVIslanders and many of them by other consultants whom the government had engaged over the years.”

Mr. McMaster noted that the new designs are not 100 percent complete, and he said the development team plans a second round of consultations once the public has given feedback.

Dr. Galipp, who joined the forum via video with INROS Lacknew S.E. architect Torsten Illgen, said one of the biggest challenges was addressing space constraints given the long but narrow stretch of shore designated for the terminal.

Early concepts didn’t include enough wharf space to fit three vessels, weren’t easily walkable, and didn’t include much space for vehicles to drop off passengers, he said while presenting the plans.

“We are proposing a different layout,” Dr. Galipp said. “The philosophy behind the layout we are proposing here is to minimise reclamation along the shoreline.”

The new plan also moves the wharf structure 10-50 metres closer to the ocean than in the previous layouts to create more space in front of the main building, he said.

The plan includes a multistorey car park and designated drop-off zone by the building entrance to address traffic concerns. The new layout would leave room for up to 10 taxi stands and staff parking, according to Dr. Galipp.

A private vessel jetty would be built east of the existing building. Members of the Marine Association of the BVI saw the plans earlier in the week, he said, and they considered three different options for how it would be oriented: north-south, northwest-southwest, or eastwest. Each alignment offered different benefits for how many berths could be added, the ease of manoeuvring into the spots, and whether dredging would be necessary, he said.

The terminal building itself, presented by Mr. Illgen, aims to make guests from both the land and sea feel welcome. He said the design is relatively open while still providing necessary protection from the elements.

“We have decided to make an exterior skeleton which is very strong and concrete, and we put in … several measures to protect the building from not only hurricanes, but also from the sun and rain,” Mr. Illgen said. “But this shell can also be opened up during sunny days.”

The roof would also be covered in solar panels, he said.

Once detailed plans are completed for the whole project, likely around the middle of April, it will go out to tender, Dr. Galipp said.

Junior Minister for Trade and Economic Development Shereen Flax-Charles described the plans as a “state-of-the-art” and “futuristic” view of the gateway.

She said it is important to tourists, residents, and business owners to have a modern facility ready to meet their needs.

The premier added that he’s optimistic the annual number of passengers arriving through the terminal will be even greater than the estimated 200,000.

Dr. Galipp said the next steps include gathering more feedback on these initial plans and submitting a climate vulnerability risk assessment report next week along with other reports.

Meeting attendees asked about immediate concerns, like how the terminal would handle quarantining individuals, and about the long-term stability of the building given its vulnerability to powerful winds and waves coming off the ocean during hurricane season.

Mr. Illgen illustrated how shields could be pulled down during poor weather.

“We will shut down the whole building with hurricane fabrics, which are fixed within rails between the ribs of the building,” he said.

Some community members remained sceptical, however.

“As soon as one hurricane throws a 35-footer at that, [it’s] gone,” Marvin Hazell wrote in the comments section under the Facebook livestream. “I mean. Wow. Not [a] fan. I think something more sturdy with colours that match the area would be great.”