Local News > What happened: Why the VIP won

What happened: Why the VIP won

This article originally appeared in the Beacon’s print edition on Feb. 28. As it became clear on Monday evening that the Virgin Islands Party would make up the next government, …

END_OF_DOCUMENT_TOKEN_TO_BE_REPLACED 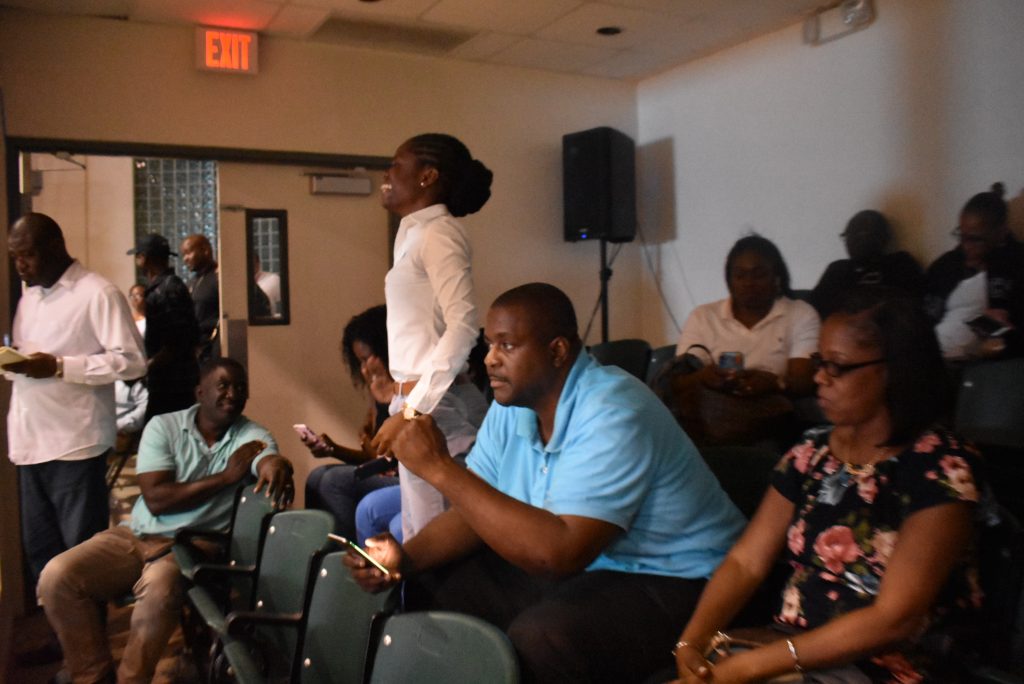 Andrew Fahie, who is now premier, pumps his fist and Sharie de Castro, who is now an at-large representative, cheers as final election results come in. Mr. Fahie is the only experienced legislator of the group. (Photo: GENEVIEVE GLATSKY)

This article originally appeared in the Beacon’s print edition on Feb. 28.

As it became clear on Monday evening that the Virgin Islands Party would make up the next government, armchair pollsters and candidates themselves began to dissect the party’s decisive win.

For VIP chairman and newly appointed Premier Andrew Fahie, their victory was due to consistent themes espoused along the campaign trail.

Sharie de Castro, who received the most votes of all territorial candidates, also said that messaging — and the power of social media — was key.

“I kept my message clean. I kept it hopeful and I have a great team supporting me,” she said after the results were read. “The interviews [I did] were very, very personal. Social media is the way of the future.”

Natalio “Sowande Uhuru” Wheatley, who beat out veteran incumbent Dr. Kedrick Pickering in the Seventh District, agreed that voters were looking for something new. In his case, he said, the district was in a state of neglect under its former representation and the NDP government as a whole.

“Whenever you’re dealing with somebody who’s been in there for 20 years, you know, they get this aura of invincibility,” he said of Dr. Pickering.

Mr. Wheatley said voters conveyed their frustrations to him during the campaign.

And while the VIP is in the driver’s seat now, Mr. Wheatley remembers the party’s brutal loss in 2015 — what he deemed a “massacre.”

The defeat was a sign that the party needed to re-establish itself, he said, and Mr. Fahie was later appointed chairman in 2016, replacing Julian Fraser, who headed the new party Progressives United this election.

Many VIP candidates this time around were also new to the political system. Mr. Fahie, Mr. Wheatley and Ms. de Castro were the only competitors who have run in a general election before, and only Mr. Fahie has held elected office.

“We set out to rebuild the party,” Mr. Wheatley said. “And in rebuilding the party I believe it was important to get some persons in there who might not necessarily have been traditionally VIP party supporters in the past.”

Outside of the VIP, several commentators said the fracturing of the NDP late last year likely altered the political playing field.

Veteran at-large incumbent Ronnie Skelton officially left the NDP, which he helped found in the 1990s, to launch the Progressive VI Movement in November, taking Second District Representative Mitch Turnbull with him.

Dwight Pickering, who has worked for the NDP during the last few elections, described the effects of the public split on Monday at the sports complex, as revellers streamed outside to celebrate the VIP’s win.

“The splintering of the NDP right at the 11th hour, so to speak: I don’t think the people, the voting public, got their mind wrapped around it,” Mr. Pickering said. “They just didn’t have enough time to digest what was going on.”

In the meantime, Mr. Fahie had “done his homework” and recruited a full slate of VIP candidates, Mr. Pickering said.

“NDP left the First and Second open, and I think that had a lot to do with Myron [Walwyn]’s demise,” he said.

Still, Mr. Walwyn losing his at-large seat was a surprise.

“That was the unthinkable,” Mr. Pickering said.

He was similarly surprised that Ms. de Castro, who is 28 years old with only one previous political run under her belt, was the top at-large vote getter.

“That was next to unthinkable,” Mr. Pickering added.

As for the PVIM, which marketed itself as a divergence from the NDP, only Second District incumbent Mr. Turnbull was elected.

Mr. Skelton, who also lost his at-large seat, allowed that his party was likely hurt by the fact it was so new.

“VIP existed from the time I was a little boy: It had some branding attached to it. And I think that helped them to really get the message across,” he said during a press conference on Tuesday.

Though in the past Mr. Skelton has been reluctant to discuss his split with the NDP in detail, he admitted this week that many voters saw the PVIM as no different from his former party.

“Let us not be naïve: The general public basically classified it as NDP 1 and NDP 2,” he said. “So I’m sure it had some effect.”

In the end, the VIP were successful in “understanding what the people needed,” he said.

“I think that our message resonated, but it did not resonate enough to make us as successful as we would like to be,” Mr. Skelton said.

Several PVIM candidates who did not win seats expressed that the party will continue past this election, though Mr. Skelton did not directly say if he plans to run for office again in the future.

As the VIP celebrated and PVIM addressed its defeat this week, the NDP and PU were quieter.

Mr. Fraser did not respond to a request for comment from the Beacon. Though he was re-elected in the Third, none of the other five candidates who ran with his party won seats. Yesterday, the PU broke its silence on its official Facebook page with a three-sentence post congratulating the winners.

Mr. Walwyn also did not respond to the Beacon’s request for comment, but he, too, posted a brief message on Facebook.

“I can assure you that I gave of my best and I was honest in all my dealings on your behalf,” he wrote. “A new government was elected tonight and they are the government for all of us. I urge all to give them your full support because their success will bring benefits to us all.”