Local News > What’s next for the VI Constitution?

What’s next for the VI Constitution?

Before discussing whether the Virgin Islands should pursue greater autonomy from the United Kingdom during the upcoming constitutional review, panellists at a Nov. 8 forum offered ideas about what is …

END_OF_DOCUMENT_TOKEN_TO_BE_REPLACED 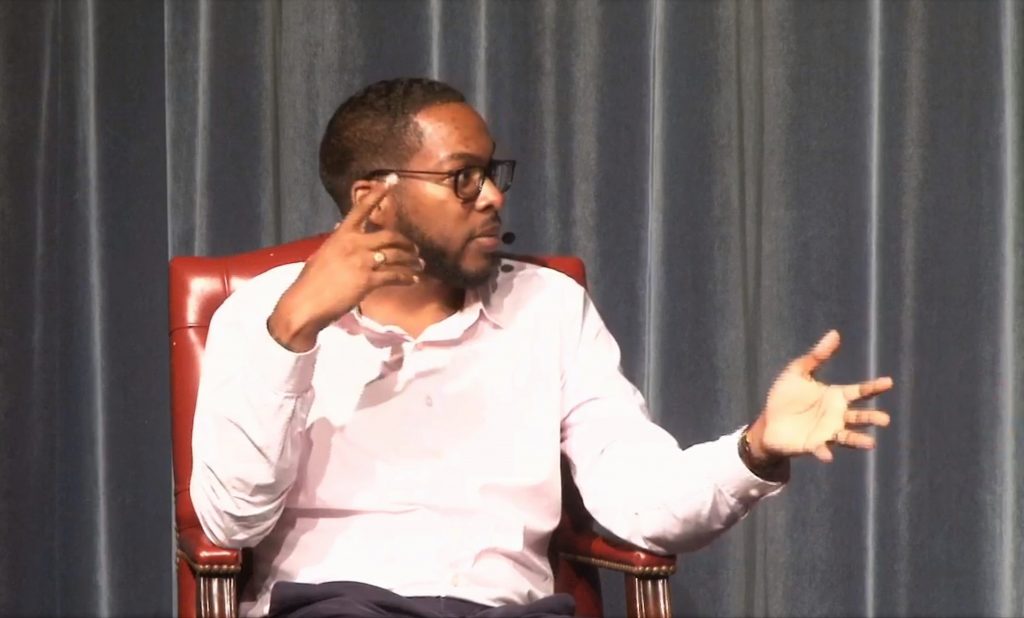 H. Lavity Stoutt Community College President Dr. Richard Georges speaks during a Sunday panel discussion about the pending constitutional review. The next version of the Constitution, he said, should include provisions that help hold the powerful to account. (Screenshot: FACEBOOK)

Before discussing whether the Virgin Islands should pursue greater autonomy from the United Kingdom during the upcoming constitutional review, panellists at a Nov. 8 forum offered ideas about what is at stake and what could be gained by either forging full steam ahead or taking a more cautious approach to self-determination.

“We’re talking about the fifth Constitution, and each one inches a little further in the direction of self-determination,” Dr. Georges said during the discussion, which was held at HLSCC. “At some point, we have to stop inching and start making some hard decisions about what it is we want to be and what we want to see.”

Premier Andrew Fahie formally announced in the House of Assembly in June that government planned to launch a review of the 2007 Constitution, which was delayed during the past three years largely because of the 2017 hurricanes.

At the time, he said the exercise is particularly urgent given the projected long-term effects of the Covid-19 pandemic, last year’s $30 million dip in revenue from financial services, the UK’s pending exit from the European Union, and the ongoing recovery from hurricanes Irma and Maria.

“The factors identified above have already had a significant impact on the Virgin Islands economy and are likely to continue doing so into the foreseeable future,” he said. “This has implications for Virgin Islanders and belongers in the pursuit of their aspirations for economic empowerment and becoming a self-governing people who are able to exercise the highest degree of control over the affairs of their country at this stage of its development.”

When the House voted to establish a formal Constitutional Review Committee in July, one of the most hotly discussed matters was the pursuit of independence for the VI.

On Sunday, the panellists dove into what that could really mean for the territory.

“There has been a lot in the air about our self-determination and what road we should take,” said Virgin Islands Studies Institute Director Bernadine Louis. “But as the Cheshire Cat says to Alice in Alice in Wonderland, ‘If we don’t know where we’re going, then any path will get us there.’”

She recounted the early days of the VI, starting when Europeans arrived in the VI as Christopher Columbus sighted the islands in 1493. The territory, she explained, didn’t develop a formal governmental structure of its own at first, but eventually it became part of the Leeward Islands Colony.

The year 1735 marked the first attempt at establishing an elected government here, but Ms. Louis said Great Britain didn’t allow it. In 1872, the VI became a presidency under the Leeward Islands Federation.

The first written Constitution was adopted in 1950, shifting the power of leadership from the governor of the Leeward Islands to the Legislative Council of the VI.

Through the years, the form of government shifted, and the terminology used to describe the VI changed from “colony” to “presidency” to the current “British overseas territory.”

The Constitution was revised four times before its current iteration was finalised in 2007, Ms. Louis said.

Led by Mr. Smith, an attorney, the panel also discussed the importance of the Constitution to the future development of the territory.

Dr. Pickering, who served as a member of the HOA for two decades and was part of the constitutional review negotiating committee in 2006 and 2007, defined the Constitution as an “umbrella document from which all other legal issues arise.”

“If we are going to aspire to build a great little nation, we of necessity will have to have a good Constitution: … one which endeavours to effectively protect the citizens from its government,” he said. “Democracy, after all, is about liberty and freedom.”

Ms. Archibald-Bowers said a constitution acts as an “insurance policy” for the rights of citizens. As such, they should have a say as to what goes into the document, she said.

But Dr. Georges argued that the VI public doesn’t have as much power in enforcing constitutional rights as it should.

“A constitution establishes the structures through which power flows, and the power ought to flow up from the people to those who govern them. But that is not the dynamic that we have,” Dr. Georges explained. “The elephant in the room is that we have a Constitution, right now, that can be stepped aside by powers above.”

He added that the territory should aim to emerge from the review with a document that “truly holds the power with which we speak.”

Dr. Georges also acknowledged the difficulty of pursuing nation building when the VI isn’t an independent nation, but an overseas territory beholden to the UK.

He said only after the VI makes a hard decision about pursuing greater autonomy can constitutional review generate a truly “aspirational” document.

Dr. Pickering argued for a more cautious approach, explaining that the Constitution is a living document that should evolve with the nation as it grows. Successive VI constitutions have strengthened the VI’s own government, he said, adding that now is the time to plan ahead for gradually pursuing more autonomy.

“The single most important thing that we have to do as a people is to decide what it is we want for our country,” he said. “The question of independence and self-determination is a conversation that has to happen. But where I differ, I think, is that it is a matter of time.”

Ms. Archibald-Bowers said an important first step is making sure the people and the politicians get on the same page. She added that they don’t yet seem to be there, though she didn’t detail where they seemed to differ.

Dr. Georges said civic education of the public is key for finding common ground moving forward. He added that such outreach can also gauge the community’s consensus on issues such as freedom of information and conflicts of interest in government.

Dr. Pickering added, “The issue of good governance starts with [the Constitution].”

Operating as an overseas territory, he said, also affects the VI’s ability to make its own decisions about specific legislative issues. For example, though the House of Assembly in June passed a bill to legalise medical marijuana — which has not received the governor’s assent — the VI’s laws can’t supersede imperial laws.

As the review process gets under way, Dr. Pickering said it is important for the VI to recognise how far it has come in gaining more autonomy while planning ahead for future advancement.

Shaina Smith, host of The Vigilate Dialogues, said she helped create the “My Virgin Islands Story” project in August as part of efforts to educate the community about the history of the territory’s political, social and economic development as it prepares for the constitutional review. Ms. Smith said she hopes the campaign will empower Virgin Islanders to better engage in the discussion.

“It is our desire that as our people become more aware of our history and heritage, that they will develop a patriotic attitude to all things Virgin Islands,” Ms. Smith said. “We have much to be proud of in our storyline, starting from our origin on the African continent, and it is time we document, showcase and articulate it in a greater, more intentional way.”