Local News > What’s next for VIP? A “massive task”

What’s next for VIP? A “massive task”

The easy part is over. On Tuesday afternoon, Andrew Fahie (R-D1) was officially sworn in as premier by Governor Gus Jaspert, a day after his party soared to a decisive …

END_OF_DOCUMENT_TOKEN_TO_BE_REPLACED 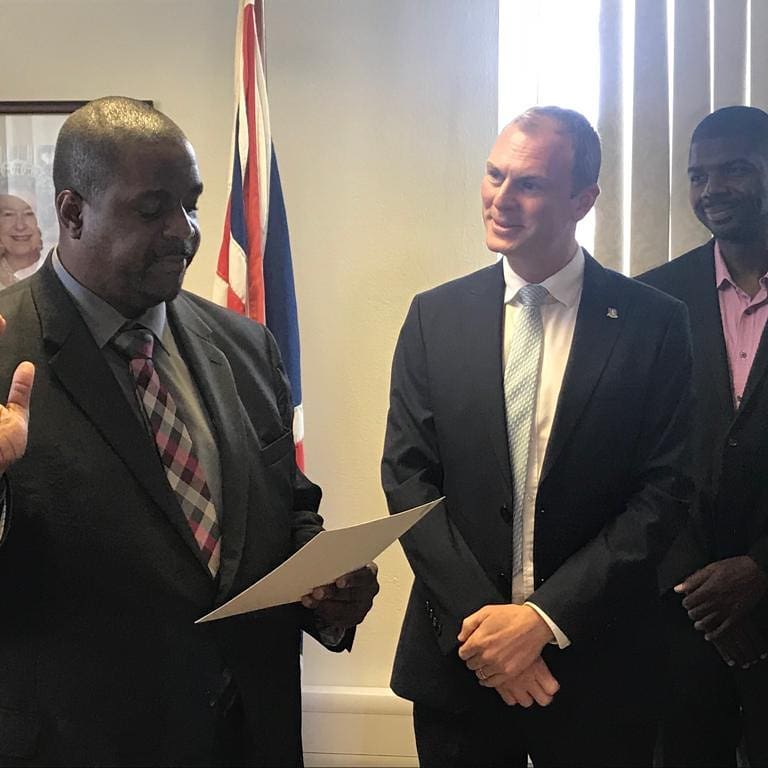 Andrew Fahie is sworn in as premier on Tuesday afternoon.Commentators say his work has only just begun. (Photo: PROVIDED)

The easy part is over.

On Tuesday afternoon, Andrew Fahie (R-D1) was officially sworn in as premier by Governor Gus Jaspert, a day after his party soared to a decisive victory on Polling Day, winning eight out of

13 seats in the House of Assembly. Ministry announcements, if past elections are any indication, will likely follow within the week.

Though the VIP will get its first shot at forming a government since the 2007 elections, it will be the first time with Mr. Fahie — who wrested control away from former opposition leader Julian Fraser (R-D3) after the party’s devastating loss in 2015 — in the driver’s seat.

With the splintered National Democratic Party now holding just three seats and its chairman voted out — and members of two other breakaway parties in the opposition mix — it looks like a clear mandate for the VIP to enact its leader’s oft-touted agenda of accountability, transparency and good governance.

But how will the government — which consists of Mr. Fahie and seven other newly-elected members — work together?

“Sometimes it’s more of a challenge” to have a clear mandate in government, said Dr. Natalio “Sowande Uhuru” Wheatley, who, besides being the newly elected District Seven representative, is a veteran political commentator and two-time candidate for office, as well as the
grandson of former Chief Minister Willard Wheatley.

“You have a majority and expectations are high,” he said.

“Sometimes it’s kind of tricky to make sure everyone has a meaningful role, especially with the at-large candidates.”

Initially, the VI’s fractured political landscape led to speculation on the possibility of an even messier situation — a coalition government, which would have been the first in 33 years and likely would have led to several days of closed-door wrangling in order to form a government.

Although that didn’t happen, the VIP’s clean victory does not guarantee smooth sailing. There are a host of pressing issues — new and old, domestic and international — knocking at the door.

And they aren’t waiting.

“The government’s entry is going to be very full, and so they’re going to have to figure out how to get things in place very quickly; find their feet and move along on getting down to the pressing issues,” said Benito Wheatley, former director of the BVI London Office and brother of Dr. Wheatley.

First up, he said, is the budget.
“That budget will have to reflect the priorities that the government identifies,”he explained. “Those priorities,I think,need to surround the recovery.”

Indeed, much of the money earmarked for the hurricane recovery has been tied up, with government struggling to meet the requirements needed to access a $65 million Caribbean Development Bank loan — and other funding slow in coming.

Mr. Fahie has repeatedly accused the NDP of failing to obtain the trust of the international community and thus causing strings to be attached to recovery funding, making the money harder to access and slowing the recovery process.

“I will just say that it’s going to be difficult regardless of how many people you have [in government],” Dr. Wheatley said, adding, “We have the recovery. The floods. A lot of infrastructure to repair, a lot of schools to repair. It’s an overwhelming and massive task.”

But more than any concrete initiatives, Mr. Fahie said,“The
first thing to do is to put in measures to ensure accountability, transparency and good governance.”

In an interview with the Beacon earlier this month, he said it
is a travesty that government remains years behind in its audited financial statements.

“Before we go any further,we have to find out what we have,” he said.“It sounds simple, but it’s very needed.”

Additional measures he called “high on the agenda” include
whistleblower laws and a mandate to make public the decisions of all statutory bodies.

He also mentioned other good-governance measures
that have failed to pass in spite of years of promises, such as a public register of interests for legislators and
fr e e d o m – o f – i n f o r m a ti o n legislation.

Ultimately, Mr. Wheatley said, the government “has to
take overall stock of the situation in the course of two or
three months so they can determine what the financial situation is and what things they need to pick up from the previous government.”

One of those projects will likely not be the NDP’s proposed runway expansion of Terrance B.Lettsome International
Airport: In a major divergence from that party’s platform, Mr. Fahie has said the expected cost of around $200 million is too high at a time when residents are still hurting economically.

Instead, his focus will be on quick wins in tourism to get
“heads in the beds,” as he put it.

These steps, he explained, could include expanding ferry schedules and times and working on getting more connecting flights to Beef Island. And of course
hurricane season — now barely three months away — also continues to loom large in a territory still struggling to rebuild from the storms of 2017.

“There are many persons that are still vulnerable,” Mr. Wheatley said.

As premier, perhaps Mr. Fahie’s most high-profile role will be representing the VI’s interests on the international stage, following through on work already done to head off challenges from multiple directions. Those include the looming threat of the European Union blacklist, for which the
economic substance requirements, passed late last year, have to be implemented by midyear.

“We’ll have to see how that’s going to work, and we also have to engage with the UK on
Brexit,” Mr. Wheatley said.

If all that weren’t enough, the UK Parliament’s Foreign Affairs Committee report issued last week apparently seeks to play hardball with the overseas territories on hot-button issues such as same-sex marriage, the elimination of belongership,
and the looming public corporate registers requirement.

As the VIP assumes power, the NDP, after Chairman Myron Walwyn was ousted by a
VIP sweep in the at-large races, will be forced to regroup, possibly with a new leader.

Dr. Wheatley, although he ousted Dr. Kedrick Pickering, a six-term District Seven legislator who ran independently, suggested that Dr. Pickering should continue to serve the territory in
some capacity.

“I do think he should be honoured for his years of
service,” he said.

Lastly, two other parties— Progressives United and
the Progressive VI Movement — each won one seat
in the HOA. What role they will play in the government ahead is a wild card. So far,
neither of them — Mr. Fraser and Mitch Turnbull,
respectively — has yet given any indication of a pulling a move like former Second District Representative Alvin Christopher did in
2007, when he won office as an independent but rejoined the VIP, his former party, on election night.

In fact, Mr. Turnbull on Tuesday called former at-large representative and PVIM Chairman Ronnie Skelton, who lost his seat on Monday, his “adopted father” and pledged his loyalty to the party, which Mr. Skelton said would carry on after a vote of
confidence.

“The movement will continue,”said Mr. Turnbull.

Mr. Fraser could not be reached for comment about his plans, though he posted a message on Facebook on Thursday: “Keep your ears cocked and your eyes on me because I’m coming up with something soon.”

According to Dr. Wheatley, the VIP, while it has control,cannot work alone.

“We need all of the residents, all citizens; we need private organisations, we need partnerships with international organisations. We need everybody on board to be able to cope with these challenges,” he said.

As for the coalition that didn’t
emerge?

Mr. Wheatley said a coalition was “always a possibility … because we had four competing parties and we weren’t sure how it would ultimately turn out; in the future I don’t think we should assume that it should never happen.”

Above all, now that elections are through, he believes it’s time to ditch the party colours and
unite behind the VI flag.

“Going forward, the territory needs reconciliation,” he said. “We cannot go forward as a divided people. We have to get behind the government and support them and rebuild the BVI, help it recover and become the society we want to be.”