Featured articles > Where are they now? Irma survivors abroad share their journeys

Where are they now? Irma survivors abroad share their journeys

Connie Haines Barry lives in an island-inspired haven in Spooner, Wisconsin, a town in the United States with a population of about 2,600 people. A pineapple-themed welcome sign hangs above …

END_OF_DOCUMENT_TOKEN_TO_BE_REPLACED 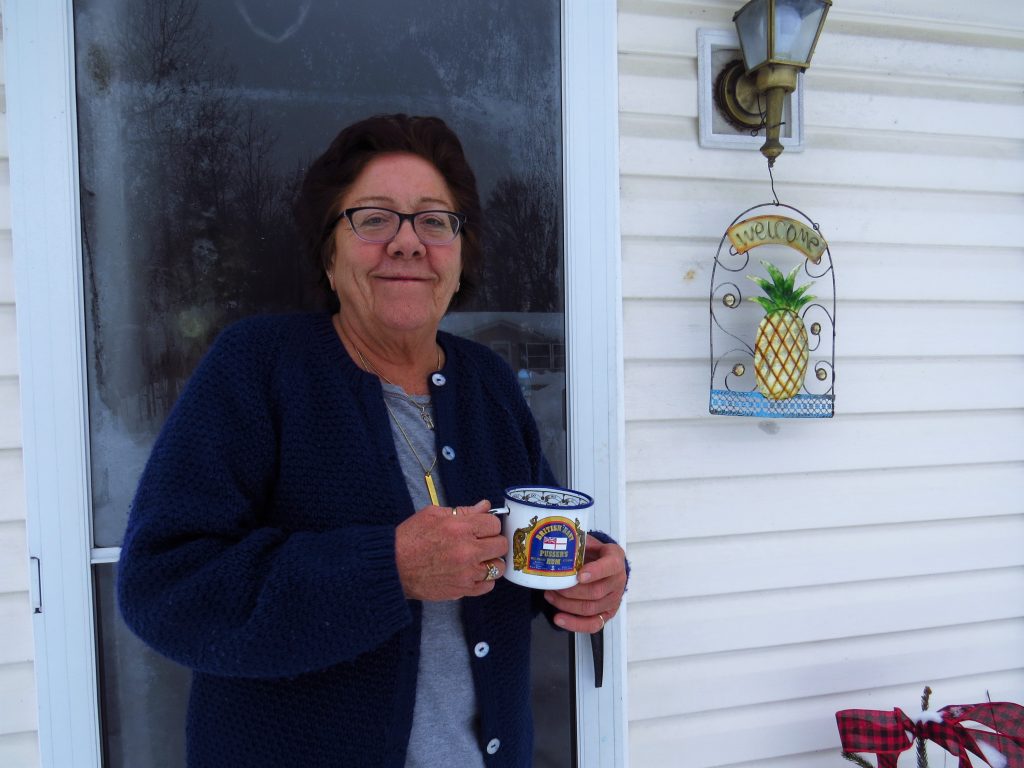 Connie Haines Barry, a belonger who lived on Tortola for 40 years, left after Hurricane Irma and now lives in Spooner, Wisconsin. She fondly recalls the kindness of strangers who banded together after the storm. (Photo: DANA KAMPA)

Connie Haines Barry lives in an island-inspired haven in Spooner, Wisconsin, a town in the United States with a population of about 2,600 people. A pineapple-themed welcome sign hangs above the snow-covered stoop, and prints of ocean-faring boats decorate her walls. A worn mug from Pusser’s Pub brings back memories of winning the bar’s annual Halloween costume contest years ago with her friends. 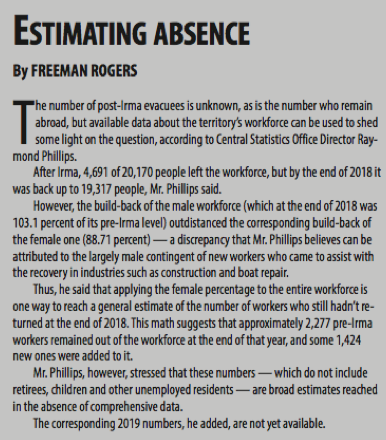 Ms. Barry lived on Tortola for 40 years before leaving because of Hurricane Irma.

The long-time belonger was one of many evacuees who have not returned since. The total number is unknown, but more than 4,500 people left the workforce after Irma, and the most recent available data suggest that nearly 2,300 had not returned by the end of 2018, according to Central Statistics Office Director Raymond Phillips, who stressed that the figure is a rough estimate that does not include children or retirees (see sidebar).

Now, some evacuees are among the more than 33,000 members of the “BVI Abroad” group on Facebook, where former residents and others congregate. Though they now live abroad, many evacuees still carry a bit of the VI in their hearts and voice the hope from afar that the islands will be able to rebuild stronger than ever.

Ms. Barry first ventured to the VI in her 20s and was enamoured by the tropical vistas, people she met and vibrant atmosphere.

“I fell in love with the island,” she said. “Not a person or anything else — the island.” Ms. Barry met with this reporter in a small bar and brewery called Round Man in

Spooner. The tiny town shares a friendly spirit similar to that of these islands. However, it’s located near the Canadian border and was buried in a foot of snow at the time of the interview.

Chatting over Oreo-infused stout beers rather than Painkillers, Ms. Barry shared fond memories of living in the VI.

She was born in White Bear Lake, Minnesota, and lived there for 21 years.

“One of my friends asked if I wanted to go down to the BVI on a sailing trip, and I said I’d love to,” she said.

That trip was all it took to make her want to call Tortola home.

“The rest is history,” she added.

She worked as a cook on boats and at several local restaurants. In her spare time, she frequented beaches with friends and enjoyed finding deals at nearby shops.

When Hurricane Irma was brewing, Ms. Barry and her family, including her daughter and grandchildren, knew it would be best to take shelter elsewhere. They hunkered down with a friend, Barbara “Babs” Myers, in her home, which was built to better withstand rough weather. They played Monopoly to pass the time and waited to see what the storm would hold.

Ms. Barry still has videos of navigating the streets after Irma, with passers-by walking around to view the damage. Her home in Brewers Bay was hit hard and damaged beyond repair, she said.

It’s a difficult subject to revisit, but Ms. Barry readily recalled the kindness of neighbours in the following days.

She flew back to the Midwest after Irma to stay with her sister. Ms. Barry didn’t take much with her at the time and lamented losing a dearly held collection of white bear figurines — inspired by the name of her hometown.

However, a friend volunteered to retrieve the collection. The basket she happened to pick up to carry the figurines was also a very special memento Ms. Barry got at her brother’s funeral.

The cohort of white bears now sit on a shelf in her Wisconsin home, a reminder of where she’s been and where she’s going.

Ms. Barry looks forward to revisiting Tortola with her family in the near future.

Diandra Jones teaches eighth-grade English at Punahou School in Hawaii, and she recently authored a personal account of surviving the storm titled Irma was Here: Surviving the Eye of History’s Strongest Atlantic Hurricane.

As a survivor, Ms. Jones said it is important for those who have moved away to continue telling their stories.

“The purpose was to highlight not only the horror of Irma, but also the uniqueness and charm of Tortola and the British Virgin Islands,” she said of her book.

Ms. Jones said she visited other islands in the Caribbean before landing on Tortola, but she loved the island.

“There’s just something special about it,” she said.

The book also touches on the role of climate change in unpredictable natural disasters, in particular in areas such as the Caribbean, and how residents in affected areas suffer psychologically from having to leave their homes.

“It was pure euphoria in the first few days. And then desperation hit.”

She lived in the VI for four years beginning in 2013, teaching dance at the BVI Dance School. Ms. Jones said she and her husband Adam Stauffer planned to make the islands their forever home but had to evacuate to the US after Irma.

The couple lived in a four-unit villa in Cane Garden Bay on the lower floor, and they were the only ones in the building who chose to stay through the storm. High winds ripped the doors away and nearly tore the roof off, but their ceiling remained intact and they were unscathed, hidden under a mattress in the bathroom.

“In the first few days after Irma, the amount of camaraderie and good will was so overwhelming,” she recalled. “I mean, people you’d maybe never seen before were hugging one another. The feat of everyone collectively having survived this freakish hurricane, it was euphoric. It was pure euphoria in the first few days. And then desperation set in.”

Ms. Jones said their food and water began to run out, which prompted them more urgently to seek evacuation. They didn’t have many connections to use as they vacated, instead relying on the kindness of strangers and a few close friends.

“We felt a bit isolated, and in hindsight when we hear people’s stories, a lot of people’s businesses got them out, or they flew out on a private jet, or people pulled together and shared resources,” Ms. Jones said. “We kind of felt like we were on our own.

“We were also riddled with guilt leaving, particularly knowing that other people couldn’t leave and were going to be in a pretty bad situation for weeks, months and possibly years to come.”

Ms. Jones said she felt grateful for having the resources to find safety, though leaving left her and her husband with strong mixed feelings.

“It was definitely a very traumatic way to leave someplace that you love,” Ms. Jones said. “And I’ve been told by so many that it’s important to go back, even if you’re not going back to stay: … just to heal and see those places. I anticipate when we do go back, it’s going to be very emotional.”

Though the couple may have felt isolated during the post- storm days, Ms. Jones said she’s grateful for the online community that has helped her to stay connected to a place she once called home.

“We really loved Tortola. I love it to this day. I’m still hoping to go back,” Ms. Jones said with a slight chuckle.

To those who are still far from the islands, she offered a simple message: They are not alone.

Hope for the recovery

Virgin Islander Eugenia O’Neal is an author currently living in Grenada, where she moved in January 2018. She previously lived in a house in the east end of Tortola. Though the building withstood the force of three severe storms, she said, it caved to Irma.

Ms. O’Neal sought refuge for a few nights in one of the shelters open to the public. She described the storm and its aftermath as one of the most harrowing experiences of her life as she worked to salvage what she could from her home while making plans to leave. It was particularly challenging in the Hodges Creek area, where communication lines were down and roads were blocked.

“I lived in the remains of my house,” she said. “My bathroom and so on: Those were still standing, so I stayed there.”

Residents in the area had little idea what the government was doing to aid in the recovery due to the downed phone lines, Ms. O’Neal said, and her stored water supply ran out after a week.

Her house was damaged but her car was functional, and she used it to bring back resources.

“I remember going into town and going from one place to another, asking for water,” she said.

Ms. O’Neal spent the following weeks at Maria’s by the Sea with the help of her friends. To this day, she commends the owners for their efforts to bring people together under a safe roof.

“At the hotel, we became a sort of community — the BVI people who were displaced and had moved into the hotel,” Ms. O’Neal said. “A lot of us knew each other, and we kind of got to know each other a bit better at mealtimes and so on.”

She said people from all walks of life, including police officers from as far as the Cayman Islands and Bermuda, shared in the camaraderie. Though the debris-ridden roads gave her flat tyres four or five times as she drove around Tortola, someone was always willing to help fix them.

“That was a pretty special experience,” she said.

Reflecting on the years since she moved, Ms. O’Neal said she’s seen how other countries have worked to recover from natural disasters. Grenada, she said, has rebuilt from when Hurricane Ivan struck the island in 2004.

And after major storms hit Dominica in 2015 and 2017, she added, the country prioritised fixing roadways, restoring housing stock and growing its use of solar power to better prepare for extreme weather conditions, which she believes will be key in preparing for unpredictably violent weather conditions.

“They are doing a really good job,” she said.

Ms. O’Neal knows from first-hand experience how important it is for islands vulnerable to storms to have well-prepared shelters and for the government to be in constant communication with residents about what resources they need.

Part of the reason she and others abroad still feel so passionately about seeing the VI rebuild is because of the unexpected magnitude of the storm.

“It’s the kind of thing you would see on the news in other countries, countries that perhaps we would think would not have the strongest housing stock,” Ms. O’Neal said. “But this was the worst thing that ever hit the BVI. Ever.”

Now that the territory has addressed the most immediate recovery concerns, Ms. O’Neal highlighted the need to look at the big picture.

“I think planning and listening to the experts is key for the BVI … and then following through,” she said. “The climate crisis is obviously hitting the region, and we [need to] decide to stop wasting money on little contracts that don’t mean anything just so we can get money into the hands of cronies. If we don’t stop business as usual, we will continue to feel the effects.”