Willock appointed Speaker of the House

Julian Willock has a controversial past. He was dismissed from the public service in 2012 following allegations of impropriety, he was briefly imprisoned in 2016 after he allegedly missed scheduled …

END_OF_DOCUMENT_TOKEN_TO_BE_REPLACED 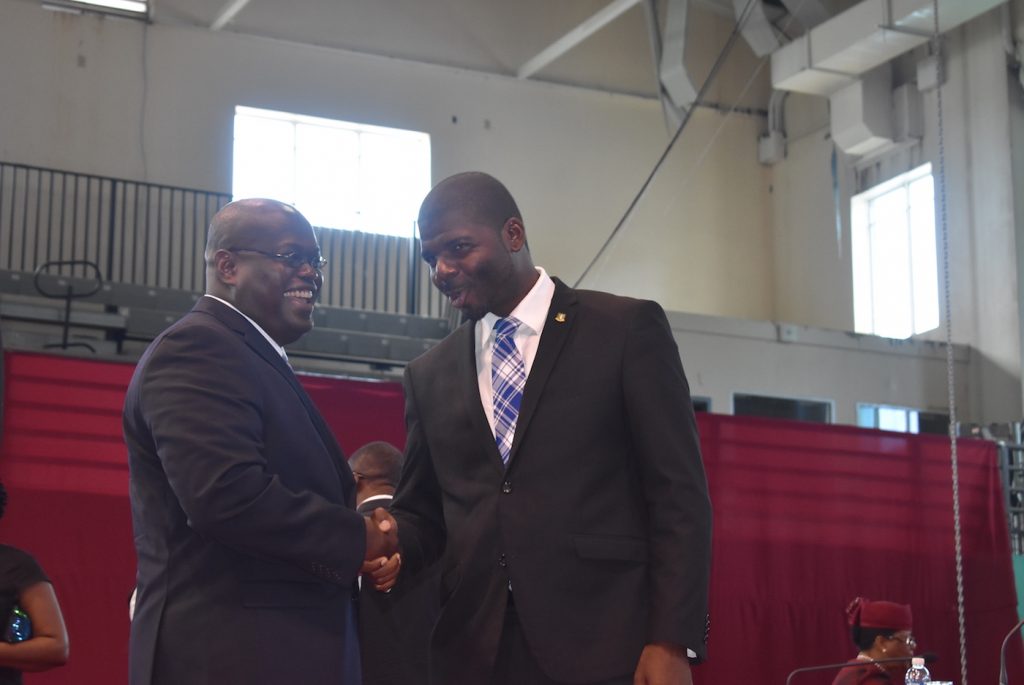 Speaker of the House of Assembly Julian Willock chatted with Deputy Premier Natalio “Sowande” Wheatley after they were sworn in on March 12. (Photo: GENEVIEVE GLATSKY)

Julian Willock has a controversial past.

He was dismissed from the public service in 2012 following allegations of impropriety, he was briefly imprisoned in 2016 after he allegedly missed scheduled court dates, and he has faced multiple legal disputes concerning his website Virgin Islands News Online.

However, the new Virgin Islands Party government appears ready to forgive his alleged transgressions, as the long-time party member was elected and sworn in as Speaker of the House of Assembly on Tuesday at the Multi-purpose Sports Complex.

Mr. Willock has strongly defended himself against accusations arising from his past controversies, and on Tuesday Deputy Premier Dr. Natalio “Sowande” Wheatley stood by the government’s choice.

“He’s extremely talented and extremely intelligent,” Mr. Wheatley told the Beacon. “And despite some of his past troubles, he deserves, I believe, a second chance because he has a lot to contribute. I think he will do well in the office of speaker.”

In his speech to the HOA, Mr. Willock seemed to promise to make the most of that opportunity.

“I pledge that my tenure as speaker will be fair, non-partisan and objective,” he said, adding that he will allow the opposition to be heard while also facilitating government business.

He also promised to uphold civility in the HOA.

“Working together, we will ensure this House is not used under the privilege of immunity to engage in personal attacks against ordinary residents or businesses,” he said.

In recent months, Mr. Willock has been active in VIP politics, attempting to run on the party’s ticket as an at-large candidate this election season, but ultimately losing by four votes in an internal party election.

“I will continue to comply with all the rules in my tenure as speaker,” Mr. Willock told the Beacon after the Tuesday HOA sitting. “The rules require that people in certain positions who have ownership declare. … I will declare all my interests as the law requires.”

Mr. Willock was employed in the civil service for more than 17 years, rising to permanent secretary in the Communications and Works Ministry shortly before his public troubles began following VINO’s launch in early 2010.

That July, he was sent on paid compulsory leave following allegations published by the Beacon that VINO had employed expatriate journalists without work permits, who received pay from Advance Marketing & Professional Services, the VINO parent company.

Then-Governor Boyd McCleary appointed a three-member panel to investigate the allegations, a decision that was stymied in 2011 when a court ruled the committee illegal.

The attorney general appealed the court’s decision to the Eastern Caribbean Supreme Court of Appeal, where it languished for three years, largely due to Mr. Willock’s lack of legal representation.

The Governor’s Office dismissed Mr. Willock from the public service in October 2012 for undisclosed reasons after more than two years of paid compulsory leave.

The Attorney General’s Office subsequently dropped its appeal of the 2011 High Court ruling after the passage of a new law resolved the broader legal questions at stake.

Throughout the process, Mr. Willock repeatedly denied wrongdoing and described the allegations against him as politically motivated.

Meanwhile, politicians, public officers and others had begun to levy claims of inaccurate reporting against VINO, which often published articles referring to its owner as “esteemed.”

Dr. Hubert O’Neal, who would later be elected Ninth District representative, sued AMPS in January 2012, claiming that the site libelled and defamed him in a December 2011 article.

The High Court ultimately granted a default judgement to Dr. O’Neal after Mr. Willock failed to file a defence, and Mr. Willock was ordered to pay $20,000 in damages and $1,800 in court costs to Dr. O’Neal.

Former Director of Public Prosecutions Wayne Rajbansie — who was a vocal critic of VINO — took the newssite and Mr. Willock to court in 2014 over an article the DPP said could have prejudiced the jury in a murder trial.

The High Court ruled in favour of the DPP and ordered VINO to remove the article and to cease publishing anything connected with the case until the final determination of the criminal proceedings.

The same justice issued a penal notice ordering the removal of a different article in 2016 around the time of a retrial of the same case.

Myron Walwyn, the current chairman of the National Democratic Party, sued VINO and Mr. Willock in May 2016, claiming defamation in a March 2016 article that included statements calling Mr. Walwyn — then education and culture minister — unfit for office after he criticised then-Opposition Leader Julian Fraser for nominating Mr. Willock to the Public Service Commission.

A justice then ordered the case to proceed to trial that December after both parties failed to attend a case management conference.

It is unclear what happened next: The Beacon has been unable to obtain court records of further proceedings, and Messrs. Walwyn and Willock both declined to comment on the status of the case this week.

Mr. Willock, however, did say that the lawsuit filed against VINO “had nothing to do with VINO.”

He also complained that because of parliamentary privilege he could not sue Mr. Walwyn for statements made in the HOA.

In the midst of the wrangling with Mr. Walwyn, police said in July 2016 that they had taken Mr. Willock to prison for allegedly missing apparently unrelated court appointments, though he was in prison only for a brief period and claimed he had written to the court to excuse himself.