A special committee convened last November has not yet decided whether taxpayers or House Speaker Julian Willock should pay the $120,000 in legal fees Mr. Willock incurred while trying to …

END_OF_DOCUMENT_TOKEN_TO_BE_REPLACED 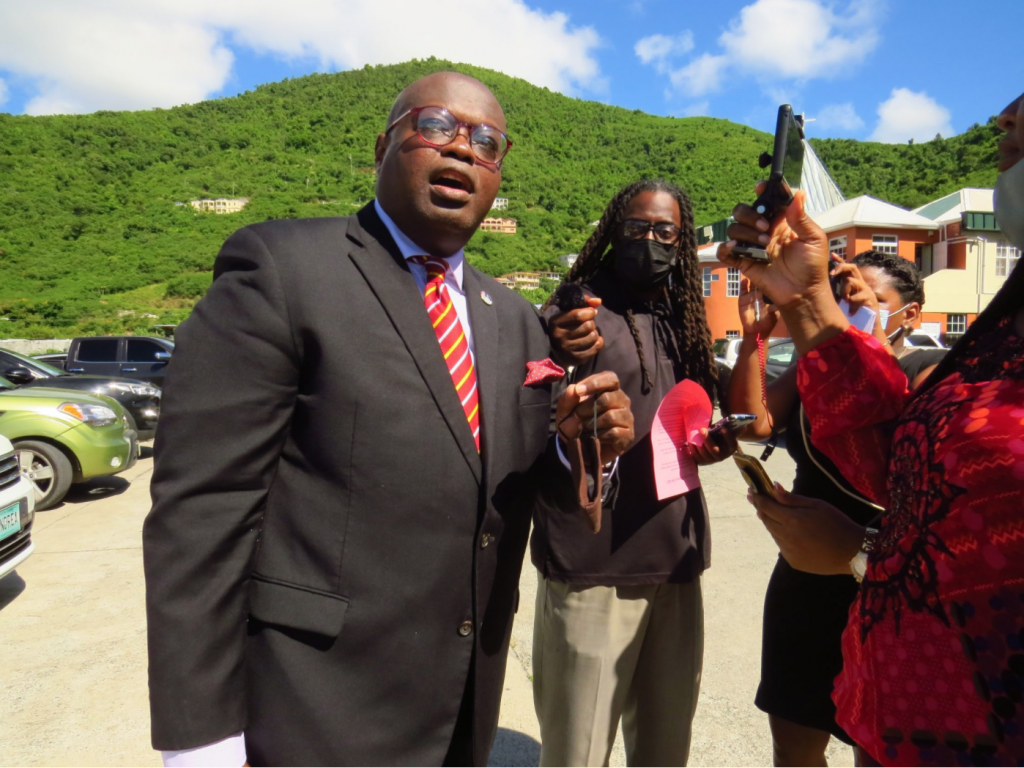 Last November, protesters converged at the House of Assembly to decry a proposed resolution that would excuse Speaker Julian Willock from paying the $120,000 in legal fees incurred from a request for an injunction he filed during the Commission of Inquiry. The House passed an amended version of that resolution, sending it to a special committee that was asked to make a recommendation on the way forward within two months. About four months later, no recommendation has been made. (File Photo: DANA KAMPA)

A special committee convened last November has not yet decided whether taxpayers or House Speaker Julian Willock should pay the $120,000 in legal fees Mr. Willock incurred while trying to block three Commission of Inquiry lawyers from working here, Premier Andrew Fahie said during a Friday press conference.

The committee is already more than two months past its deadline: The House of Assembly passed a motion on Nov. 4 giving it two months to make a recommendation.

“The most I’ve heard is that the committee asked for a little more time,” Mr. Fahie said Friday in response to a question from the media.

Natural Resources, Labour and Immigration Minister Vincent Wheatley, who sits on the special committee, said Monday via WhatsApp that the committee has met and hopes to deliver its recommendation by the end of the month “if all goes well.”

Asked what direction the committee is leaning, he said it is too early to know.

“We are in the [information]-collecting stage still,” said Mr. Wheatley, who serves on the committee along with two opposition members: Committee chairman Mark Vanterpool (R-D4) and Julian Fraser (R-D3).

Mr. Willock incurred the $120,000 in legal fees when he sought an injunction against three COI lawyers based on his claim that they were breaching the Legal Profession Act 2015 by acting as legal practitioners in the territory without being called to the bar.

Although Mr. Willock later withdrew the request and his lawyers argued that government should pay the fees, Commercial Court Justice Adrian Jack ruled on Sept. 28 that he should personally pay the fees he incurred.

The resolution that Mr. Fahie initially introduced to the HOA would have exempted Mr. Willock from paying the fees, saying that the House “considers it just and proper that the honourable speaker should not be personally responsible for payment of the costs of an action that he instituted on behalf of this honourable House.”

But that resolution drew widespread condemnation from the public, with dozens of protestors converging in front of the HOA on Nov. 1 and more than 1,300 people signing an online petition to “make Willock pay his own bill.”

The resolution was later amended on Nov. 3 to put the onus on the special committee to make a recommendation, and it was passed the next day with five votes in favour, two against and five absences.