Starting in July, the Willy T floating bar and restaurant will be back where many visitors and residents feel it belongs — in its original location, anchored off The Bight …

END_OF_DOCUMENT_TOKEN_TO_BE_REPLACED 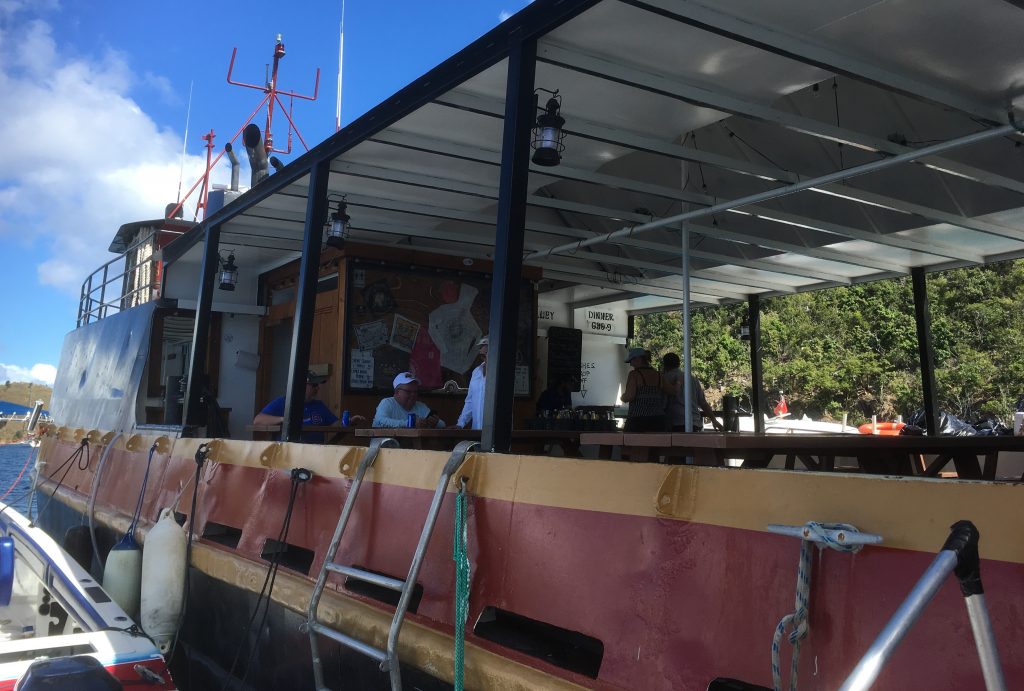 The Willy T floating bar and restaurant, which was forced to move in May 2018, is heading back to its original location. (Photo: RICK SHEFCHIK)

Starting in July, the Willy T floating bar and restaurant will be back where many visitors and residents feel it belongs — in its original location, anchored off The Bight near Norman Island — following a government decision in a seabed licence dispute that threatened to leave one of the Virgin Islands’ most popular boating attractions adrift.

“The Marine Estate Policy confers the authority on the Crown and the Crown alone to decide how the seabed is to be used,” Natural Resources, Labour and Immigration Minister Vincent Wheatley said in a statement released last Thursday. “After studying the matter very carefully, we have agreed that this is the best location for the Willy T.”

Owner Ewan Anderson, who had previously said he was frustrated about the business being “in limbo” for so long, was relieved.

“Willy T has been an icon in The Bight off Norman Island.
of the BVI for 34 years,” he said on Tuesday. “It reflects well on the government and [Premier Andrew] Fahie. The precedent it sets is excellent: that the Crown lease belongs to the people.”

The relocation is dependent on the ability of the owners of the new Willy T vessel to meet various environmental, health and safety criteria, the release added. Its owner said those requirements won’t be a problem.

“That will be done ASAP: literally this weekend,” Mr. Anderson said. “This weekend was the first test, the first definite moment [where] we know what is happening, and this week we will be moving forward with that situation.”

The announcement appears to mark the final chapter in a saga that began in May of last year, after Mr. Anderson brought the new $500,000 vessel to replace the one that had been destroyed by Hurricane Irma in 2017, only to find that government denied him permission to moor again in Bight Bay off Norman.

“The Willy T has been moored at the Bight under an annual seabed licence which expired in February 2018,” a government announcement explained at the time. “Since the earlier part of 2017, the government of the Virgin Islands has been having discus- sions with the owners and operators of the Willy T about a number of environmental and other operational issues, and about new development plans for the area which would require the vessel to relocate.”

Those development plans became clear in October, when Cabinet gave the go-ahead for government to negotiate a development agreement for 75 to 100 lots on Norman Island with Dr. Henry Jarecki, the island’s owner.

Mr. Anderson said Tuesday that he couldn’t speak about the future of that development.

After being booted from Norman, the new vessel was relocated to Great Harbour, Peter Island.

About six months after it settled into its new home, however, the business received a letter from the Department of Trade and Consumer Affairs, stating that due to “objections” from Peter Island Ltd., the vessel had three months to vacate its current location, giving the boat until the end of December to leave. The move sparked social-media outrage and suggestions for new locations, ranging from Salt Island to Jost Van Dyke.

Mr. Anderson declined to speculate on why the new government reversed the previous decision and allowed the vessel back in The Bight.

“Mr. Fahie made steps to hopefully take care of us here,” he said. “This is where we’ve arrived, and it’s in their hands.”

According to the press release, “The government … expects that the legendary floating restaurant and bar will continue to provide the same level of enjoyment as it has over the years, and for many more years to come.”

Meanwhile, the previous vessel, which has been beached on Norman Island ever since Hurricane Irma, will live on as part of an artificial reef system, according to the owner.

Mr. Anderson explained that he had given charge of that project over to Chris Ju- redin, owner of Commercial Dive Services, who has plans to turn it into a historically themed diving attraction.

“There’ll be all sorts of famous names [involved],” explained Mr. Anderson, adding that the site will be based around classic tales like Robinson Crusoe and Treasure Island, which Norman Island is said to have inspired. “We’re not sure where yet.”