Rolling seas showcased the white, aquamarine, turquoise and sapphire colours of the open ocean on a sunny day as more than a dozen athletes prepared to cross the channel between …

END_OF_DOCUMENT_TOKEN_TO_BE_REPLACED 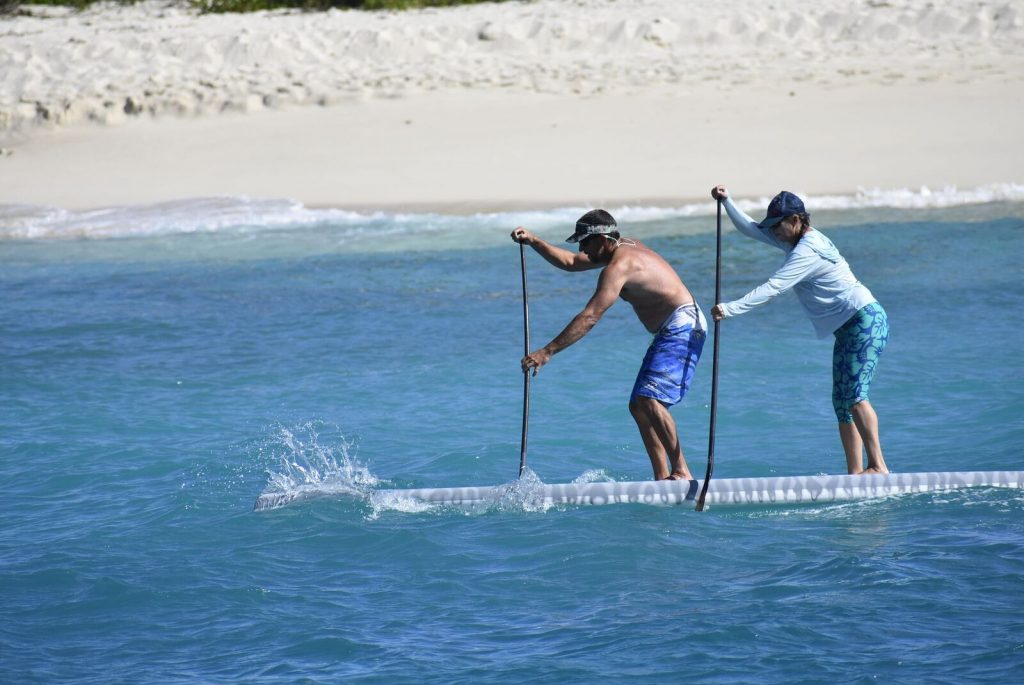 More than 30 people entered the Mini Painkiller Cup, travelling from Sandy Cay to White Bay at Jost Van Dyke on Saturday, just as seas were picking up from high winds that persisted through the beginning of the week. (Photo: DANA KAMPA)

Rolling seas showcased the white, aquamarine, turquoise and sapphire colours of the open ocean on a sunny day as more than a dozen athletes prepared to cross the channel between Tortola and Jost Van Dyke on paddleboards.

Though gales forced many ocean-goers out of the water this weekend, the high winds didn’t stop the racers from reaching the finish line Saturday afternoon at White Bay, where competitors stopped to eat, swap stories and claim their prizes.

The annual event featured two races: the Mini Painkiller Cup began at Sandy Cay and traversed about three miles, and the main event featured a 14-mile relay from Trellis Bay.

This marked a particularly memorable year for the winning relay team of William Kraft, Isabelle Picard and Jeramie Vaine. Ms. Picard said competing in the race had always been a bucket-list item, and now she looks forward to racing in the cup every year.

She and Mr. Kraft are from St. Croix, and they rented a villa with friends to fully enjoy the event. With such big waves, it took a team effort to fight the wind and cross the finish line.

“It was a tough race today,” Ms. Picard said. “It’s so much fun because the race is challenging, but there’s also a lot of camaraderie.”

But having solid teammates, practising plenty even in windy conditions, and remembering to have fun made it possible, Mr. Kraft said.

“You have plenty of laughs with your friends on the boat as you’re racing,” Mr. Kraft said of the relay.

Ms. Picard said she appreciates the fact that the race welcomes everyone from experts to beginners, and she encourages anyone who is interested in the Painkiller Cup to be unafraid of trying.

Mr. Vaine, from Boston, said he first heard about the race from his friends and was excited to take on the challenge.

“It’s a really special feeling, even after the hurricane, to be able to support the community that always opened its arms for us,” he said. “Every time it comes up, it’s a no-brainer to come.”

He added that being able to traverse the blue waters of the passage on a paddleboard was a remarkable opportunity.

“Even when it gets a little bit excited and slightly chaotic, it still has its paradise charm to it,” Mr. Vaine said. “You just look up and see the mountains that reach up to the clouds. It’s a really neat experience.”

The top prizes included roundtrip flights to anywhere within the interCarribean Airways system in both races, and $2,500 cash for the top relay team.

Event organiser Andy Morrell said the “exacting” conditions this year made for a challenging race, but the winning relay team put up an impressive time.

“For the team race that started at Trellis Bay, it was challenging,” Mr. Morrell said. “The guys that won were very, very strong paddlers.”

More than 30 racers entered the mini cup this year, several of whom considered doing the full relay but decided against it given the high seas.

Before heading out as a self- described total novice, Colin Wilson checked his heart rate on his watch — a “medium stress” 76 beats per minute. During the race he fell off his board once, and in spite of a few close calls he found his balance.

Mr. Wilson found himself at the back of the pack early on, and it took a big effort to fight his way to 13th place.

“I’m satisfied to have finished, but it was a lot harder than I thought,” Mr. Wilson said. “The waves were big, but I would get a glide on a wave and then come down and then I would stop and go nowhere. Once I got into my rhythm, it was okay.”

“I’ll definitely be coming back next year, and I think I’ll be doing some more practice,” he chuckled.