A pirate queen, a Christmas elf and Marilyn Monroe were the three colorful characters who took top honours at the Hallowine costume contest at TICO in Pasea Estate last Thursday. …

END_OF_DOCUMENT_TOKEN_TO_BE_REPLACED 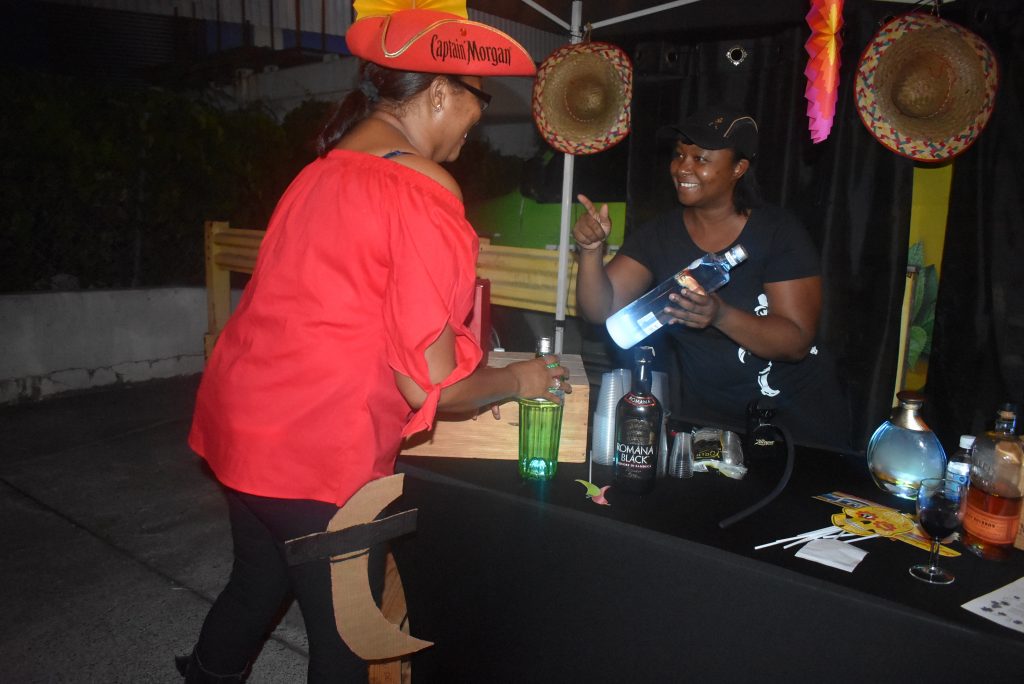 A pirate queen, a Christmas elf and Marilyn Monroe were the three colorful characters who took top honours at the Hallowine costume contest at TICO in Pasea Estate last Thursday.

The object wasn’t fright, however, but raising $1,350 for the Family Support Network.

The fundraiser, sponsored by the wine merchant and Tortola Ladies Club, couldn’t have come at a better time for FSN, given that October was Domestic Violence Awareness Month.

The observance has been e ident to anyone driving through the Road Town roundabout, which is lined with signs about different types of abuse, while stickers dotting various businesses promote the month’s theme: “There Is No Excuse for Violence and Abuse.”

“It sticks, because you kind of get annoyed of it, … and that’s what we want,” FSN Director Sasha Stoutt said of the theme. “We want people to think about it.”

From January to August, the organisation helped relocate several victims and facilitated 18 protection orders, which Ms. Stoutt said was slightly lower than normal.

However, she pointed out that the post-Hurricane Irma housing shortage may lead victims to choose to stay in situations they otherwise wouldn’t.

“Prices are so high that people are afraid if they do leave the relationship, what’s going to happen?” she explained.

“We still have people coming to us, but along with that we still do believe that there are other people out there that we have not seen,” she said.
This month the organisation has been running public service announcements and visiting secondary schools, where students are challenged to create hash- tags, slogans and posters. The winner will be announced and receive a trophy next week.

“We see them as a population that is already dating and we wanted to make sure they understood what healthy relationships were,” Ms. Stoutt said of the high schoolers.

TLC President Sharon Burrill said the club was proud to join forces with TICO to raise funds for the organisation, fresh off the heels of April’s Ten Day Challenge for FSN, which surpassed its fundraising goal by $7,000.

“That was just asking people to donate, because I think that the community wants to help,” she said.

Last week’s fundraiser featured employees donning witch and vampire costumes to groove to the music of Al Broderick. Members brought in homemade snacks that ranged from sausage rolls to gluten-free brownies, and it wasn’t just wine on the drink menu: TICO employees were also shaking up cocktails using coconut rum and Irish cream.

Ms. Burrill, who used to work as a social worker in Canada, said she developed empathy for situations involving children and families.

“The cause is close to my heart,” she explained. “In this post- Irma world, the amount of stress that’s on families is even more. … These are issues that are important to me, to [the TLC], and I think to the community in general.”