Local News > With no known Covid cases, opening speeds up

With no known Covid cases, opening speeds up

In recent weeks, Martin and Lucy Whitrod, a father and daughter who own and manage Beans Coffee Shop in the Cyril B. Romney Tortola Pier Park, had been offering only …

END_OF_DOCUMENT_TOKEN_TO_BE_REPLACED 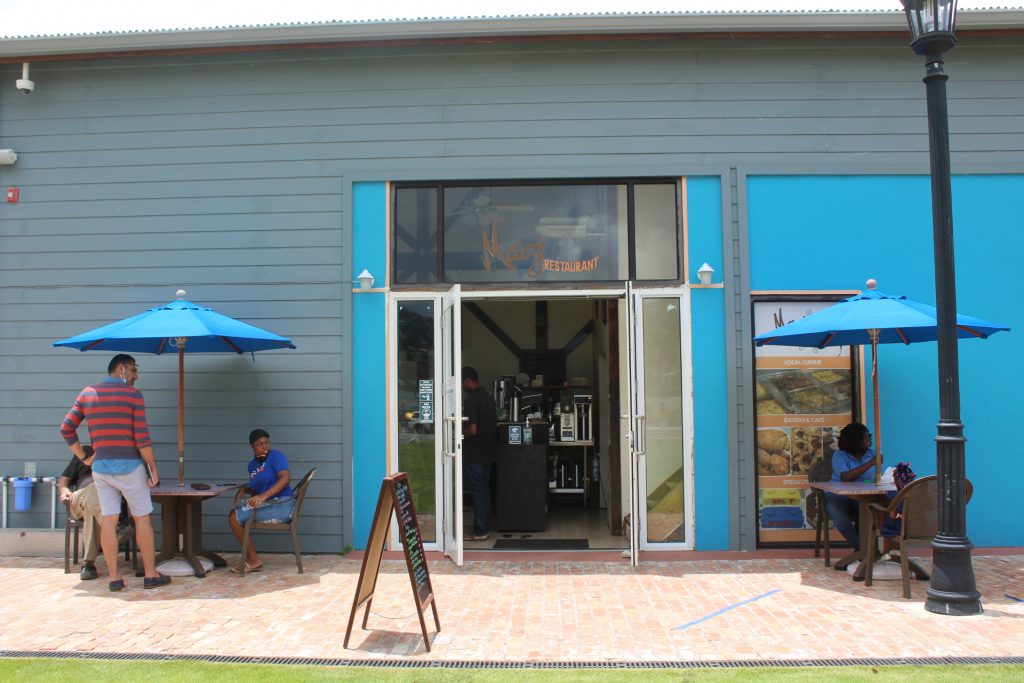 Patrons outside of Mac’s Restaurantat at the Cyril B. Romney Tortola Pier Park sit at tables that are widely spaced to foster social distancing. Approved businesses were allowed to start offering dine-in services this week. (Photo:ZARRIN TASNIM AHMED)

In recent weeks, Martin and Lucy Whitrod, a father and daughter who own and manage Beans Coffee Shop in the Cyril B. Romney Tortola Pier Park, had been offering only to-go service as required by territory-wide restrictions designed to fight the coronavirus pandemic.

When they heard an announcement on Friday allowing businesses to offer limited dine-in services starting Sunday, they immediately sought approval from the Environmental Health Division.

Luckily, they said, management at the Pier Park has also been pushing for its businesses to open while meeting health requirements, often reaching out to officials to urge them to grant the green light.

“Last week, there was no one here. At least now you see people walking around,” said Mr. Whitrod, pointing to a few people spending time at the park on Tuesday afternoon. “We’re lucky we have a good following locally. And our customers have been good. They follow our markers and practise social distancing without us even having to ask.”

On Tuesday evening, Health and Social Development Minister Carvin Malone announced that there are no longer any active Covid-19 cases or quarantined people in the territory.

Nevertheless, leaders are urging caution as the VI re-opens gradually.

“You have to live in order to have a livelihood,” Mr. Malone said.

Abiding by the rules will prove crucial in the next phase of re-opening, officials said last week.

Phase two of internal re-opening will begin on Tuesday, starting with the opening of borders for Virgin Islanders, belongers and permanent residents, who will have to be quarantined for two weeks.

The re-entry will be carefully controlled, allowing only those who have been approved by government to return home, Premier Andrew Fahie said during a press conference last Thursday.

To obtain approval from the Environmental Health Division, entrants must also have “approved private quarantinable accommodation” available for at least 14 days and fill out a registration form that was posted online Monday.

Priority will be given to those who left for medical reasons and were unable to return home due to border closures, he added.

After June 15, some approved registrants will also have the option to enter the territory and remain in government quarantine spaces, but the number of available spaces was not disclosed at the press conference. Quarantine in a government facility, Mr. Fahie said, will be funded by the government.

Re-entry will only be allowed through the Terrance B. Lettsome International Airport, Mr. Malone said during the press conference.

“Every person coming into the territory will be subject to pre-arrival screening, health screening on arrival, ongoing monitoring during a 14-day mandatory quarantine period, and testing to confirm their Covid-19 status,” he added. “As previously stated, persons with suitable accommodations for home quarantine will be given priority in the first phase of re-entry.”

Other requirements include housing quarantined individuals separately from family and others; ensuring ventilation in each bedroom of private quarantine areas; self-monitoring; testing on days one and 14 of quarantine; and official certificates of release from quarantine.

Though Mr. Malone briefly mentioned that applying online would help the government schedule flights to bring people home, he did not provide more details on those flights.

Many community members took to Facebook this week to discuss viable options to bring residents home, including government-organised flights between St.Thomas and Beef Island.

Others commented on his post in The REAL BVI Community Board Facebook group, adding information about VI Airlink operating flights three times a week between Beef Island and St. Thomas.

The decision to open borders to nationals next week is not new.

On April 15, Mr. Fahie addressed the issue, saying, “When the borders do open up in phase two, only persons deemed to belong to the territory and person with resident status will be allowed entry over the next three months, but with strict conditions.”

Officials have not said when work-permit holders and other residents without permanent-resident status will be allowed to enter.

Arliene Penn, director of communications for the government, clarified on Tuesday that Mr. Fahie’s April 15 statement does not necessarily mean that work-permit holders will be banned from entering for three months after the opening on Tuesday. Cabinet, she said, will announce any decisions made regarding work-permit holders when the time comes.

No tourism for now

Asked last Thursday if the territory is considering opening its borders to visitors for the purpose of tourism soon, Mr. Malone simply stated that the VI would not “throw the gates open” next week.

“It is a planned re-entry for nationals first, and belongers, residents, so that we can then ready ourselves,” he said. “The particular curfew even for the next 14 days would remain from 7 p.m. to 6 a.m. because we want to make sure that when people start coming home we monitor them and that we don’t retard all of the progress that we made in the months that we’ve had to adhere to all the protocols that were already established.”

Despite questioning from the Beacon, officials did not provide more information about further reopening the borders for tourism. Instead, they stood by their decision to keep the borders closed for now.

“Tourism worldwide is crippled, and while I heard that some of the other territories are going to reopen in June, I say this out of the goodness of my heart: I wish them the uttermost well because Covid-19 is not a simple matter,” Mr. Fahie said. “In tourism [in the territory], they’re working on stay-vacations. When the Tourist Board is ready, the chair and others will come forward. But they’re working right now on areas that are allowed in terms of internal movement. You would appreciate our need to get our people home and make sure we manage that properly.”

Safety, he said, remains the priority for the territory.

A new curfew order reflecting recent Cabinet decisions took effect Sunday, and will last two weeks. No changes were made to the existing curfew hours, which begin every night at 7 p.m. and continue through 6 a.m. However, restaurants are now able to accept dine-in patrons once approved for safe social-distancing measures.

During the press conference last Thursday, officials also announced the Cabinet decision to increase the size of permissible gatherings in buildings from 20 people to one person per 46 square feet with a maximum of 50 people.

On Tuesday, Opposition Leader Marlon Penn released a statement urging the government to consider allowing businesses to open until 10 or 11 p.m.

“The disruption in business due to the decline in traffic to restaurants has caused irreparable harm, leaving businesses saddled with debt,” the statement read.

Beach hours were also extended. People can visit the beach for “the purposes of exercise and therapy” between 6 a.m. and 3 p.m. daily, instead of 1 p.m. as before.

Natural Resources, Labour and Immigration Minister Vincent Wheatley later announced that dogs can be walked on the beach from 6-8 a.m., but must be leashed.

Also during the press conference, Mr. Malone commended the government for keeping the number of Covid-19 cases low by taking “positive and decisive steps from early.” But this success, Mr. Fahie warned, can give people a “false sense of security.”

In reality, he stated, the territory does not have “limitless [medical] resources.”

Asked if events like the Leverick Bay Poker Run, Christmas in July, and other large upcoming gatherings will take place, the premier said his government will make such decisions when the time comes.

“If those [positive] signs are there from health professionals and others, we will make sure we move ahead,” he said.

Messrs. Fahie and Malone were asked to provide an estimate of the economic damage the territory has suffered so far due to Covid-19, but they did not disclose that information.

“Lives versus livelihoods: That is now the argument,” Mr. Malone said. “The fact is that we are living in an era that since 1918 and the Spanish Flu we don’t know about, and we are managing it as best as we could.”