Works are still underway at the Ralph T. O’Neal Administration Complex, Deputy Premier Kye Rymer said last Thursday in the House of Assembly, but he stopped short of providing a …

END_OF_DOCUMENT_TOKEN_TO_BE_REPLACED 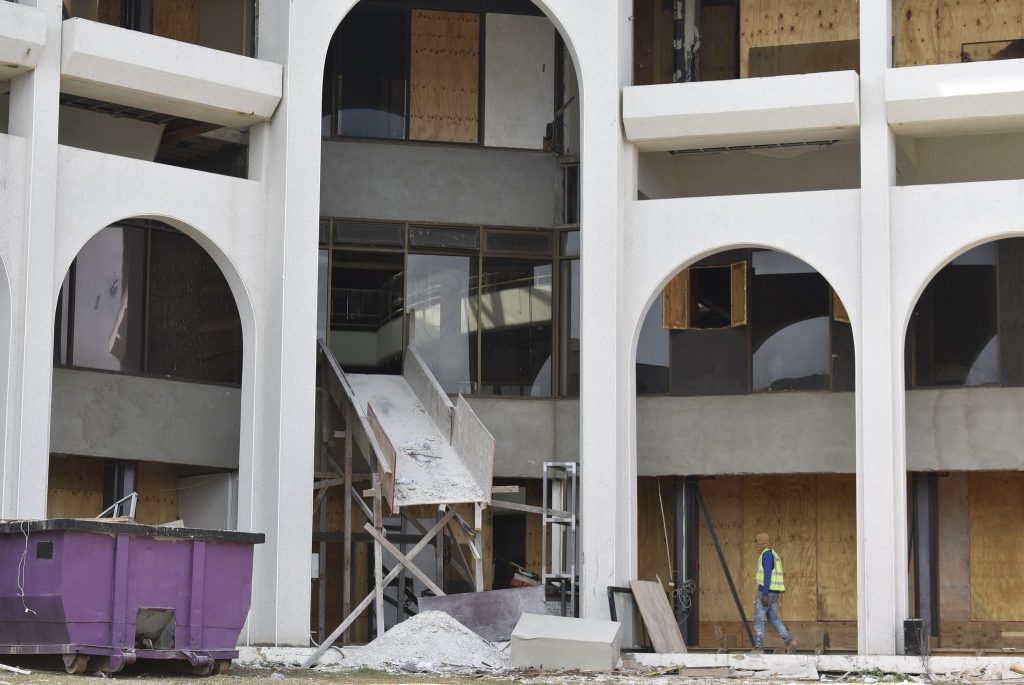 Works are still underway at the Ralph T. O’Neal Administration Complex, Deputy Premier Kye Rymer said last Thursday in the House of Assembly, but he stopped short of providing a completion date for the long-delayed project.

Mr. Rymer was charged in 2019 with the rehabilitation of the building, which was badly damaged in Hurricane Irma in 2017.

The latest phase of the project has focused on hurricane-resistant doors and shutters, he said last Thursday.

“The installation works are 85 percent complete, and we anticipate this phase to end within the next month,” he added.

The government has also completed the installation of a waterproof roof and replacement skylights, and it is working to repair the exterior stucco finish of the building and construct a basement parking garage, according to the minister.

Mr. Rymer also shared details of a $1 million-plus contract that was awarded for the procurement and installation of an elevator in the building’s west atrium.

According to the minister, the new elevator will address issues raised by the public regarding handicap accessibility.

The design, he said, enhances one that was developed several years ago by adding a housing and lobby area for the elevator system.

“The designs were prepared by OBM International, which ironically was the company that prepared the original elevator design many years ago, therefore making the engagement to update the design a seamless process,” Mr. Rymer said.

Two companies bid for the project in a public tender process in December, he said, adding that the central tenders board evaluated the bids and Cabinet approved the decision in accordance with the board’s recommendations.

The winning construction company will create openings on all the floors to access the new 17-by-10-foot elevator, which will extend 45 feet in height from the ground level, he added.

The elevator itself is an Otis second-generation model that is “one of the most reliable elevators currently on the market,” according to the deputy premier.

On the outside of the building, Mr. Rymer said, a new finish will be “self-cleaning” — a change from the previous exterior, which was difficult to maintain due to the building’s proximity to the ocean.

“The stucco finish from STO Corp., a company based in the United States, comes with a warranty for the products being installed,” he said. “The stucco finish is called Lotusan, and the finish will be a washable finish that effectively resists dirt and grime accumulation, thereby having self-cleaning technologies activated when it rains.”

He added that the new finish will reduce maintenance costs.

The exterior works are expected to begin by October, he said, but he didn’t say when they would finish.

Meanwhile, work on the basement in the west atrium has begun, he added.

“The retaining walls and catchment drains are already constructed, and the contractor is currently working on constructing the access road to enter the basement,” Mr. Rymer said. “Members may be aware that there is a basement parking on the east atrium. Therefore, as an easement and as an enhancement to the overall function of the complex, parking is being provided to facilitate senior public officers and ministers whose offices are located in the west atrium.”

He also said that additional works to assess drainage — which will help mitigate the effects of potential flooding vulnerabilities — have started.

“All the drains on the compound are being repaired and upgraded to provide additional resiliency,” Mr. Rymer stated.

Additionally, all the interior metal beams are being cleaned, treated and painted, he said, adding that this undertaking is about 35 percent complete.