After what Chief Planner Greg Adams called a misunderstanding, land reclamation began in Havers last month for the Drake’s Landing hotel-and-marina project that has been in the works for the …

END_OF_DOCUMENT_TOKEN_TO_BE_REPLACED 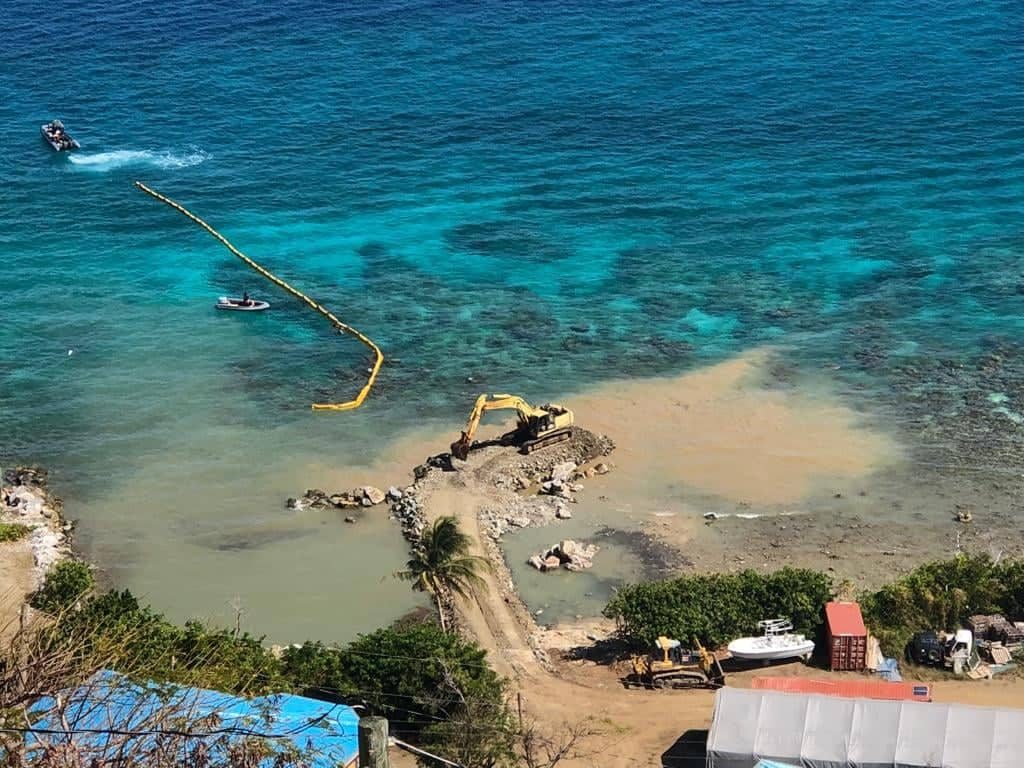 An L-shaped jetty was built in Havers on April 24 as a preliminary step towards the Drake’s Landing project, which is to include a 150-room hotel and 114-slip marina. Work was subsequently halted after what government’s chief planner described as a misunderstanding, but it is expected to resume soon. (Photo: PROVIDED)

After what Chief Planner Greg Adams called a misunderstanding, land reclamation began in Havers last month for the Drake’s Landing hotel-and-marina project that has been in the works for the past five years.

On April 24 truckloads of rock and landfill were brought into Havers and poured into the ocean to create an L-shaped jetty.

But the reclamation was halted after employees from the Town and Country Planning Department took note and reported it, according to Mr. Adams.

The developers, he explained, still need to meet certain requirements of their Environmental Management Plan before land can be reclaimed.
“There’s some feedback we’ve given and are waiting on the EMP,” he said. “Once that’s done, they’ll have the green light.”

Though the reclamation was approved late last year, developer JSSR Holdings cannot begin reclaiming the land until that feedback has
been addressed, according to Mr. Adams.

“We contacted the developers and told them what our expectations were,” Mr. Adams said. “They submitted the EMP, but we told them we
have to review it and send them feedback, which they have to respond to.”

The feedback has now been provided to the developers and Mr. Adams said they likely will be able to resume work in the coming days.

Developer Robert Wong on Tuesday insisted that the Virgin Islands “desperately needs development” and said the project is under way, but he declined to comment further.

During a public meeting at Valerie O. Thomas Community Centre in Sea Cows Bay on July 5, 2018, Dr. Cassander Titley-O’Neal, director of Environmental Systems BVI, who completed the environmental impact assessment for the project, said the amount of planned re-claimed land had been reduced from 8.6 acres to 4.2 acres.

Other aspects of the development, however, had grown.